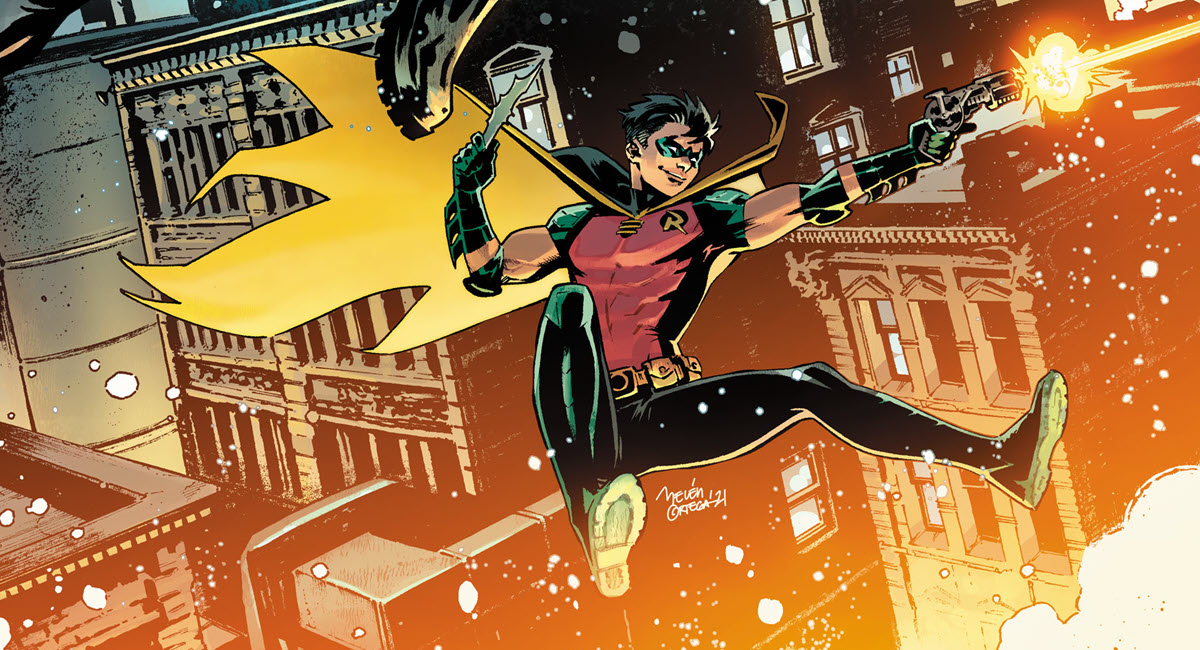 In August DC Comics made headlines when Tim Drake, the third character to bear the mantle of Robin, began exploring his bisexuality in the pages of Batman: Urban Legends #6. Tim’s story is set to continue in December’s Batman: Urban Legends #10, in a lead story from the creative team of writer Meghan Fitzmartin, artist Alberto Albuquerque Jimenez, colorist Nick Filardi, and letterer Pat Brosseau, and today DC released an unlettered preview of the story ahead of the issue’s preorder cutoff.

Written by Meghan Fitzmartin, the feature-length story “A Carol of Bats” features art by Alberto Albuquerque Jimenez (pencils/inks), Nick Filardi (colors), and Pat Brosseau (Letters). This continues Tim’s journey of self-discovery from Urban Legends #6, and sees Tim balancing his drive to fight crime with his desire to be a great partner. Amidst the ashes of a devastated Gotham City and Fear State, Tim Drake comes back to Gotham City to help Batman and Nightwing try and put the city back together again after its devastation at the hands of The Scarecrow and The Magistrate. Along the way, Tim tries to get Batman out of a Scrooge-level funk, where the Dark Knight has serious doubts about if he’s failed Gotham City, and if its citizens will stop being scared and angry enough to have hope for the future.

The latest issue of the anthology series will also include three additional stories: another full-length tale starring Nightwing, from Tini Howard, Christian Duce, and Sarah Stern; the conclusion of a three-part Azrael story by Dan Watters, Nikola Cizmesija, and Ivan Plascencia; and the finale of a two-part Tweedle Dee and Tweedle Dum story by Sam Johns and Karl Mostert.

In a statement accompanying the preview, writer Fitzmartin discussed getting the chance to continue Tim’s coming out story:

“The response to Tim’s story has been more than I could have hoped. It’s always exciting to share Tim’s journey with fans, and close 2021 with this special holiday story in Batman: Urban Legends #10.”

Tim Drake isn’t the only DC Comics character to begin exploring bisexuality in recent months. Last month the publisher revealed that current Superman Jon Kent will come out as bisexual in an upcoming issue of Superman: Son of Kal-El.

Check out the four-page preview featuring artwork from Jimenez and Filardi, as well as a variant cover featuring Azrael by artist Riccardo Federici, below. The issue will also sport a variant cover by Becky Cloonan, though that cover has yet to be revealed. Batman: Urban Legends #10 is due out in stores and digitally on Tuesday, December 14th. Preorders for the issue are open until this Sunday, November 7th.

RECAP: HAWKEYE S1E3 — We need to label these arrows!
505 Games Signs Publishing Agreement with MercurySteam for Next Game, Currently Titled Project Iron
Respawn’s Vince Zampella to head up Battlefield franchise and has plans for a connected universe
Halo Infinite: Here’s What Is In The Shop This Week
Marvel releases all four issues of HOW TO READ COMICS THE MARVEL WAY digitally