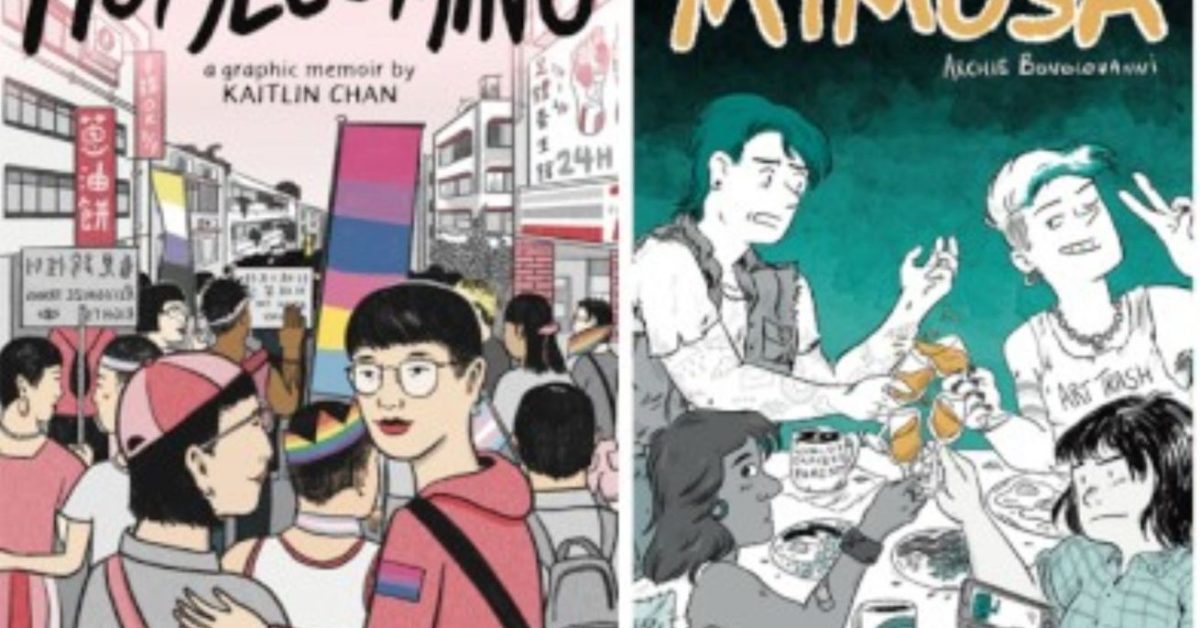 Two years ago, Abrams ComicArts announced Surely Books as an LGBTQ+ focused imprint of graphic novels, curated by Batman writer Mariko Tamaki. The pandemic slowed things down a touch, but its first book, Lifetime Passes by writer Terry Blas and artist Claudia Aguirre, the story of a bunch of teenagers who hatch a scheme feigning to help seniors only to be transformed by them, is published in November. But Surely Books has now named a bunch of upcoming titles for 2022 and 2023.

In this darkly comedic YA graphic novel, a group of teens starts a program to bring senior citizens to a local theme park to take advantage of the unofficial park policy: If someone dies on the property, the rest of their party is given lifetime passes! Sixteen-year-old Jackie Chavez loves her local amusement park, Kingdom Adventure, maybe more than anything else in the world. The park is all she and her friends Nikki, Daniel, and Berke—although they aren’t always the greatest friends—talk about. Kingdom Adventure is where all Jackie’s best memories are, and it’s where she feels safe and happy. This carries even more weight now that Jackie’s parents have been deported and forced to go back to Mexico, leaving Jackie in the United States with her Tía Gina, who she works with at the Valley Care Living seniors’ home. When Gina tells Jackie that they can’t afford a season pass for next summer, Jackie is crushed. But on her next trip to Kingdom Adventure, she discovers a strictly protectedsecret: If a member of their party dies at the park, the rest of their group gets free lifetime passes. Jackie and her friends hatch a plot to bring seniors from Valley Care Living to the park using a fake volunteer program, with the hopes that one of the residents will croak during their visit. The ruse quickly gets its first volunteer—a feisty resident named Phyllis. What starts off as a macabre plan turns into a revelation for Jackie as Phyllis and the other seniors reveal their own complex histories and connections to Kingdom Adventure, as well as some tough-to-swallow truths about Jackie, her friends, and their future. With artist Claudia Aguirre, Terry Blas has crafted a graphic novel that is dark and deeply moving. This book is Cocoon meets Heathers—a twisted satire about a magical land and the people who love it, even to the point of obsession. Jackie’s summer is about to turn into a wild ride filled with gallows humor, friendship, and fun—or is it?

The previously announced Flung Out of Space: Inspired by the Indecent Adventures of Patricia Highsmith, a fictional story about the real-life author Highsmith by Grace Ellis and Hannah Templer, scheduled for February 2022.

A fictional and complex portrait of bestselling author Patricia Highsmith caught up in the longing that would inspire her queer classic, The Price of Salt.Flung Out of Space is both a love letter to the essential lesbian novel, The Price of Salt, and an examination of its notorious author, Patricia Highsmith. Veteran comics creators Grace Ellis and Hannah Templer have teamed up to tell this story through Highsmith’s eyes—reimagining the events that inspired her to write the story that would become a foundational piece of queer literature. Flung Out of Space opens with Pat begrudgingly writing low-brow comics. A drinker, a smoker, and a hater of life, Pat knows she can do better. Her brain churns with images of the great novel she could and should be writing—what will eventually be Strangers on a Train— which would later be adapted into a classic film by Alfred Hitchcock in 1951. At the same time, Pat, a lesbian consumed with self-loathing, is in and out of conversion therapy, leaving a trail of sexual conquests and broken hearts in her wake. However, one of those very affairs and a chance encounter in a department store give Pat the idea for her soon-to-be beloved tale of homosexual love that was the first of its kind—it gave the lesbian protagonists a happy ending. This is not just the story behind a classic queer book, but of a queer artist who was deeply flawed. It’s a comic about what it was like to write comics in the 1950s, but also about what it means to be a writer at any time in history, struggling to find your voice. Author Grace Ellis contextualizes Patricia Highsmith as both an unintentional queer icon and a figure whose problematic views and noted anti-Semitism have cemented her controversial legacy. Highsmith’s life imitated her art with results as devastating as the plot twists that brought her fame and fortune.

Talia Dutton‘s M Is for Monster, a heartfelt sci-fi scenario combining the Frankenstein story with a heartwarming tale of sibling expectations, scheduled for June 2022.

A scientist attempts to bring her younger sister back to life with unexpected results in this Frankenstein-inspired graphic novel about ghosts, identity, and family. When Doctor Frances Ai’s younger sister Maura died in a tragic accident six months ago, Frances swore she would bring her back to life. However, the creature that rises from the slab is clearly not Maura. This girl, who chooses the name “M,” doesn’t remember anything about Maura’s life and just wants to be her own person. However, Frances expects M to pursue the same path that Maura had been on—applying to college to become a scientist—and continue the plans she and Maura shared. Hoping to trigger Maura’s memories, Frances surrounds M with the trappings of Maura’s past, but M wants nothing to do with Frances’ attempts to change her into something she’s not.
In order to face the future, both Frances and M need to learn to listen and let go of Maura once and for all. Talia Dutton’s debut graphic novel, M Is for Monster, takes a hard look at what it means to live up to other people’s expectations—as well as our own.