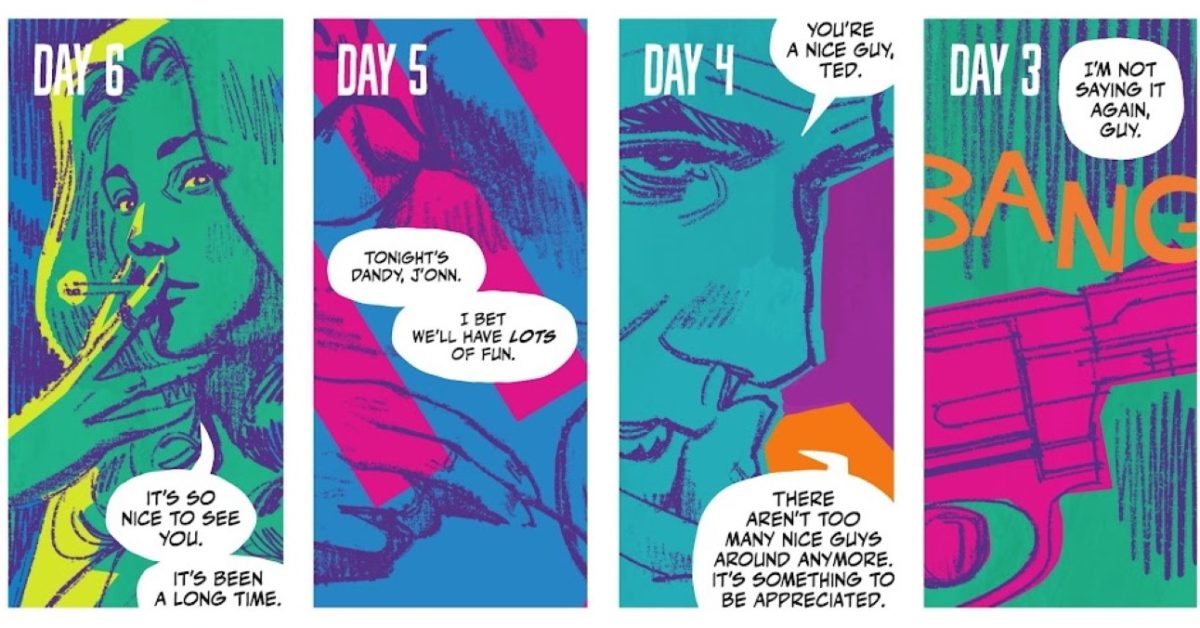 It’s The Human Target time! Tom King as a writer is one heavily influenced by Watchmen and if anyone was going to do Rorschach, it would be him. After all, in recent years we have had a number of unauthorised sequels and prequels to Watchmen. DC Comics gave us a bevy of Before Watchmen prequels (with a little bit of a sequel). HBO produced a fully blown Watchmen sequel to the comic book in televised form. And Tom King and Jorge Jones created a political thriller and assassination mystery with Rorshach. All of them were lesser than the original and, arguably, lessened the original. The influence on modern-day comics of Watchmen is unarguable but the main lesson that people seemed to take was that it is really cool when superheroes are psychopaths,  swear, have sex and kill each other in really gross fashions. Rather than, comic books are words and pictures and you can do anything with words and pictures. Watchmen invented or condensed a bunch of storytelling tricks, it expanded the visual language of comic books, and that was its true legacy, albeit a largely unappreciated one.

Tom King does seem far more aware of the panel and position of the comic book page. And in The Human Target #1 with Greg Smallwood, has taken those lessons and found new ways to tell comics. Not that it’s just Watchmen here, the influence on Smallwood of Darwyn Cooke‘s recreation of another age in Parker and New Frontier is definitely at play, as well as Andy Warhol‘s print pop-art in telling a story that’s out of time, but more than anything draws on the eighties’ JM DeMatteis, Keith Giffen and Kevin Maguire run on Justice League International.

He’s a writer aware of the grid, the panels, the beats when telling a story and often it seems the enjoyment the audience has of his work comes down to how much that appreciate the level of the metronome he has set. In Human Target #1 he’s creating a faster beat and it’s some that may resonate more than his Batman/Catwoman which jumps from rhythm to rhythm. But every page becomes a masterpiece of storytelling, every panel measured and judged.

A twelve-issue series, it is spread out across the last twelve days in the life of Christopher Chance, the Human Target, the man who dresses like you to attract threats against you, then deals with them. And in this series, that means being Lex Luthor. But from issue 1, that is a non-linear journey, and begins seemingly at the end, with our hero laying down to die.

Before flashing back through the previous twelve days, Tom King name dropping the recognisable first names of familiar JLI figures, and in the knowledge that in the next eleven issues, we are going to see these scenes told in a more realistically coloured fashion that this, and in a way that may make more sense than this staccato cacophony. We’ve seen a lot of this non-linear work from Tom King of late in both Rorschach and Batman/Catwoman, but this feels far more effective at both creating a mystery introduction to the high concept of this series.

One shot Guy Gardner? What is he getting up to with the Martian Manhunter? What did he get up to with Black Canary? Anyone have a Russian-to English OCR? (Okay, apparently it’s a Russian proverb, along the lines of, you can’t die twice but you can’t avoid dying once. Said as bravadom before taking on a dangerous task). We have a thriller, a murder mystery, a non-linear jigsaw puzzle to piece together. It’s the 1949 movie D.O.A. (Christopher Chance even looks like Edmond O’Brien) mixed with superheroics, Justice Leageurs and the Daily Planet, some familiar DC Comics IP to coddle us and make us feel safe…

… but also that one of the JLI is his own murderer. Potentially intended to be Lex Luthor, but now he has taken the bullet. or the radioactive poison. Hmm, is it going to be Captain Atom? Do Armageddon 2001 properly this time?

HUMAN TARGET #1 (OF 12) CVR A GREG SMALLWOOD (MR)
(W) Tom King (A/CA) Greg Smallwood
Christopher Chance has made a living out of being a human target—a man hired to disguise himself as his client to invite would-be assassins to attempt his murder. He’s had a remarkable career until his latest case protecting Lex Luthor when things go sideways. An assassination attempt Chance didn’t see coming leaves him vulnerable and left trying to solve his own murder…as he has 12 days to discover just who in the DCU hated Luthor enough to want him dead. Human Target is a hard-boiled, gritty story in the vein of classic detective noirs told by bestselling and critically acclaimed creators Tom King and Greg Smallwood!
Retail: $4.99 In-Store Date: 11/02/2021