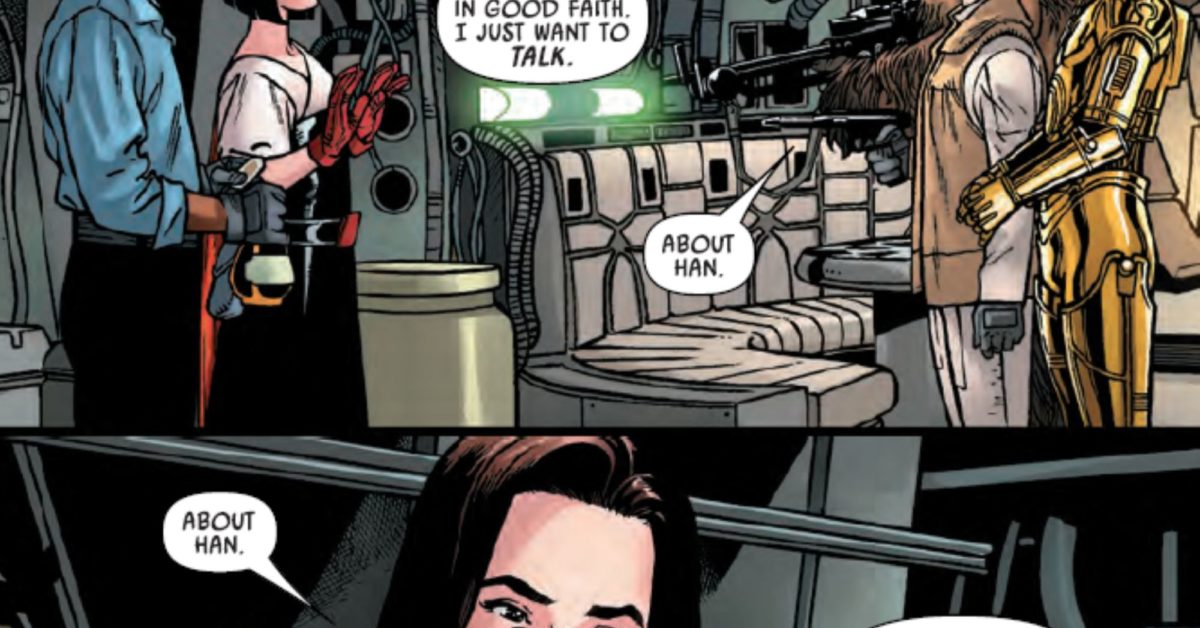 Lady Qi’ra grew up on the streets along with Han Solo as part of the White Worms gang, and became partners in every sense before they were separated. Qi’ra was sold as a slave, eventually to Dryden Vos, the public leader of Crimson Dawn, rising through the ranks to become his lieutenant. She eventually killed Vos to save Han Solo, but then left to return to Dathomir to meet with Maul, the then-true leader of Crimson Dawn. And in the Marvel comic book series War Of The Boungty Hunters #1, we saw her make her comic book debut, set in the time between Empire Strikes Back and Return Of The Jedi, where the carbonised body of Han Solo is being used as a barter chip across the galaxy. And as that event ends, how will Lady Qi’ran and the Crimson Empire integrate into the Star Wars canon? The Crimson Reign event is about to start, but first there are War Of The Bounty Hunters epilogues to run… and aon opportunity for Qui’ra and Leia to meet for the first time. With Lando who knows them both well… too well.

And just when you thought that this comic book was going to easily pass the Bechdel Test... this is Star Wars, don’t be silly.

Lady Qi’ra ran the auction for Han Solo’s frozen body when it was stolen from Boba Fett earlier in the event, and after a variety of heist-like approaches, Leia feared the worst.

Of course, not is all as it seemed, and Qi’ra is continuing to manipulate everyone.

And she hasn’t just stopped now, with Charles Soule and Ramon Rosanas giving her a killer look and line.

And makes an offer for the Crimson Empire to come.

STAR WARS #18 WOBH
MARVEL COMICS
AUG211248
(W) Charles Soule (A) Ramon Rosanas (CA) Carlo Pagulayan
“COLLISION COURSE” Reeling from the events on JEKARA and forced to confront the reality of her own choices and losses, LEIA ORGANA meets QI’RA to discuss the person they both have in common – heroic smuggler HAN SOLO! How has he influenced their lives to that point? And how will it change their fate moving forward? RATED TIn Shops: Nov 03, 2021 SRP: $3.99

STAR WARS: CRIMSON REIGN #2 (OF 5)
CHARLES SOULE (W) • STEVEN CUMMINGS (A) • Cover by LEINIL FRANCIS YU
THE ASSASSINS! QI’RA sends two killers to do what they do best to continue with her plan to plunge the galaxy into chaos. The relentless, Force-blinded OCHI OF BESTOON and the mysterious, unstoppable DEATHSTICK each have a target, and nothing will get in their way!
32 PGS./Rated T …$3.99

STAR WARS: CRIMSON REIGN #1 (OF 5)
CHARLES SOULE (W) • STEVEN CUMMINGS (A) • Cover by LEINIL FRANCIS YU
AFTER THE DAWN… COMES THE REIGN! The story that began with WAR OF THE BOUNTY HUNTERS continues here, in the second installment of a trilogy that will reshape the history of the Star Wars Galaxy during the Age of Rebellion. Featuring the return of beloved characters, shocking twists, epic feats of the Force and a story that will reach from Star Wars’ darkest underworld all the way to the Imperial palace on Coruscant, Crimson Reign is a Star Wars saga like no other! 40 PGS./Rated T …$4.99