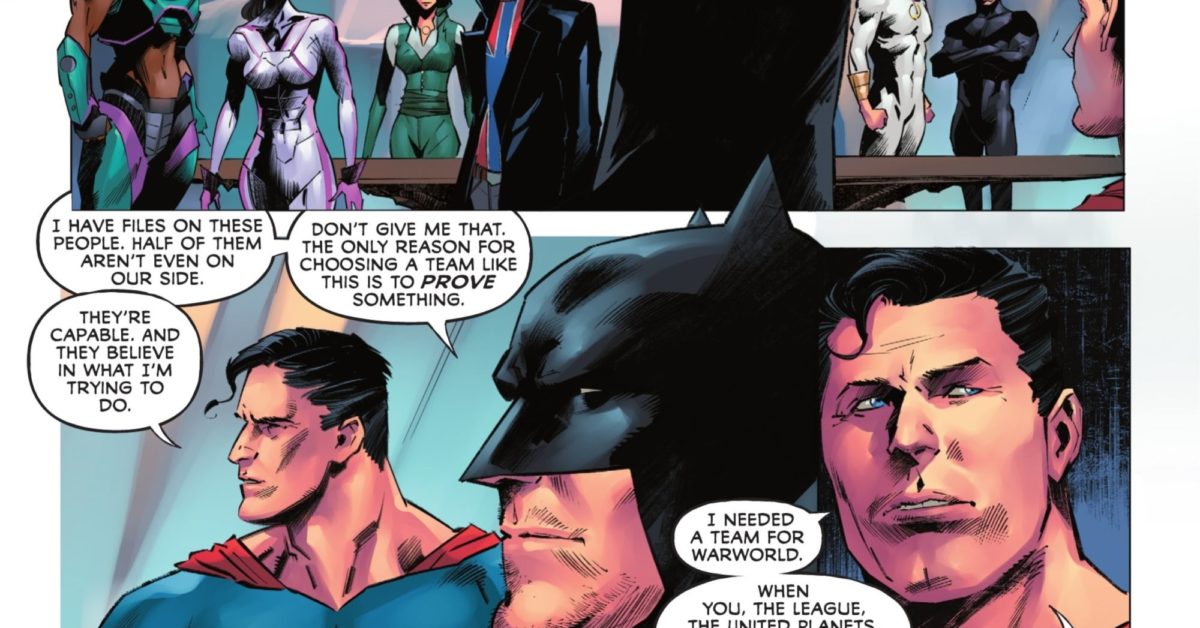 Today sees the publication of the Batman/Superman Authority Special by Phillip Kennedy Johnson, Trevor Hairsine, Jonathan Glapion and Ben Templesmith. And rather than explaining what seemed to be continuity issues between the portrayal of Superman and The Authority in the Grant Morrison/Mikel Janin series and the regular Superman titles, it just tries to ignore any conflict, completely. Basically, nothing happened, nothing matters.

The Superman & The Authority series saw an older Kingdom Come-style Superman, a contemporary of JFK, whose powers are failing and whose Justice League had failed. It begins with Superman meeting President Kennedy the month of his assassination as Kennedy is planning putting a man on Mars, while Superman becomes part of that year’s putting a man on the moon – an event that sees him unable to prevent the assassination of JFK.

While the rest of the series, set in the present day, had an older Superman, with greying hair, and a costume closer to the future-set Kingdom Come series, putting together a new team, The Authority, made up of Jack Hawksmoor, Midnighter, Apollo, Natasha Irons, Enchantress and eventually a new OMAC.

It was originally part of then-DC Publisher Dan DiDio revamp/relaunch/reboot plan called 5G or Generation Five, that would have lined up a timeline for the DC Universe, would have aged the main characters and see them replaced by new people in the lead books. Regarding Superman and The Authority, it was a move that Bleeding Cool first reported in 2019, and Grant Morrison has talked about how originally the plan that they rejected was to have a more authoritarian Superman forming The Authority while his son Jonathan Kent took over in the main Superman role.

And though 5G was abandoned by DC Comics when Dan DiDio was fired, and some of its comics revamped into Future State, Superman & The Authority seemed to be partially set in the new DC Timeline past instead.

And that would have been fine, set alone by itself as yet another alternate future or Earth as part of the Multiverse. But then the main Superman comic book started getting involved and it was decided that Superman would use the Authority to take down the slave society of Warworld, with Wildstorm characters added to the Superman Future State series.

And in today’s Batman/Superman: Authority Special, sees Superman introduce the team to Batman for their own pre-WarWorld special mission.

And with a Superman who does not look like the one from Superman/Authority,

Even though the comic explicitly references the events of Superman And The Authority. A series in which there was no Justice League anymore, and here has a Justice League that just won’t go along with Superman’s WarWorld concerns yet. And while Superman may not look old…

…Midnighter behaves as if Batman is. And as Batman talks through their mission…

… it is to rescue The Fuginaut. Now, Tempus Fuginaut was created by Dan DiDio for the Sideways series, part of the all-but-forgotten New Age Of Heroes initiative.

DiDio made sure that Tempus Fiuginaut survived, however, and was a big part in the setup of 5G, part of the Flash Forward series that was to act as a prelude to 5G. And now?

Dead, killed off-panel, and gutted for parts. This is, basically, exactly what happened to 5G and Dan DiDio after he was pushed out. DC Comics has never even officially admitted that 5G even existed, or acknowledged Dan DiDio’s departure. And now, they never will.

BATMAN SUPERMAN AUTHORITY SPECIAL #1 (ONE SHOT) CVR A RODOLFO MIGLIARI
(W) Phillip Kennedy Johnson (A) Trevor Hairsine, Jonathan Glapion, Ben Templesmith (CA) Rodolfo Migliari
Following Mongul’s brazen attack on Earth, Superman’s world has been turned upside down: conflict between Atlantis and the surface world, the discovery of an immensely powerful new element, dead refugees with mysterious ties to Krypton, and expulsion from the Justice League! When Superman re-forms the experimental, antiestablishment Authority to join him in liberating Warworld, Batman comes to them with a request: join him for one unorthodox, off-the-books mission first, one he could never ask the Justice League to be a part of…and one he doesn’t expect everyone to come back from. Retail: $5.99 In-Store Date: 11/02/2021