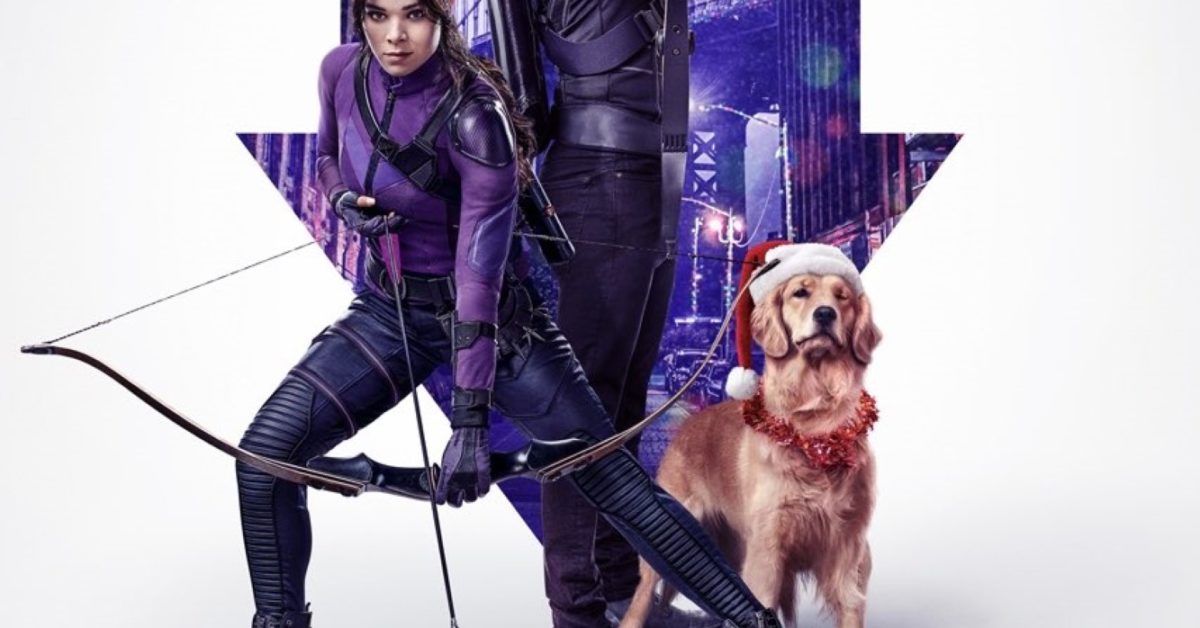 Here is a Marvel Studios/Disney+ poster for the upcoming Hawkeye TV series starring, which will launch with its first two episodes on November the 24th. The series is partially based on the Matt Fraction, David Aja, Annie Wu and Matt Hollingworth run from a few years ago, including adapting elements such as Lucky the Pizza Dog, a golden retriever who is a companion to Barton and Bishop.

Marvel producer Trinh Tran has been quoted as saying “Fraction’s run is absolutely one of the most amazing things. I remember sitting there are reading through the Fraction run and going, this is amazing. This is absolutely amazing. This is something we can do. We can do this! So wanting to tell Clint’s backstory, after reading Fraction’s run and getting excited for Kate Bishop there’s something really interesting that I think the two of them can have.” And here’s a cover from that series.

When someone described the poster as being based on Matt Fraction’s Hawkeye, artist Bruno Redondo (whose work on Nightwing with Tom Taylor has been repeatedly compared to this Hawkeye run) tweeted “Stop crediting JUST writers, mostly when the visual tribute is… just that, straight based on @davaja cover. Comics are a team work”. At which point, David Aja replied, “Even better: Stop crediting, start paying, haha.” Ouch. Then further Hawkeye TV posters were published that seemed to have been created by in-house Disney artists redrawing Aja’s work on the series, and cut and pasting Jeremy Renner and Hailee Steinfeld’s photos, it took another turn.

Hawkeye was created as a TV series by Jonathan Igle, the fifth television series in the Marvel Cinematic Universe (MCU) produced by Marvel Studios, sharing continuity with the films of the franchise and taking place after the events of the film Avengers: Endgame. Igla serves as head writer with Rhys Thomas leading the directing team. Jeremy Renner reprises his role as Clint Barton from the film series, with Hailee Steinfeld joining him as Kate Bishop. Vera Farmiga, Fra Fee, Tony Dalton, Zahn McClarnon, Brian d’Arcy James, and Alaqua Cox also star. Hawkeye is scheduled to premiere its first two episodes on November 24, 2021, and will consist of six episodes, concluding on December 22. It is part of Phase Four of the MCU. A spin-off series focused on Cox’s character Maya Lopez/Echo is also in development.

Uncover the mystery of Clifford Castle in 6Souls
Over Half of The Game Awards 2021 Will Be New Game Announcements
LucidSound LS15X Wireless Headset Review
Next Million-Selling Superhero Comic, Cat Kid: On Purpose, For April
Icarus building guide – the basics of construction