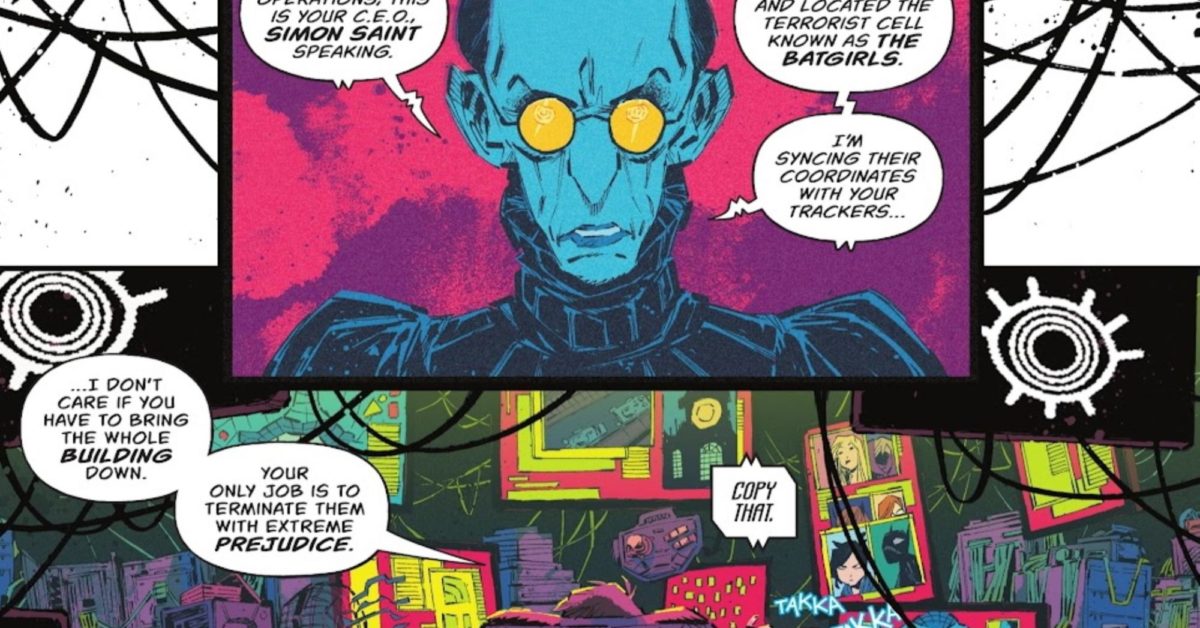 Today sees the publication of Batman #116, the penultimate issue of Batman by James Tynion IV, but also continuing to set up the new Batgirls series by Becky Cloonan, Michael W Conrad, and Jorge Corona. And while the main strip by Tynion IV and Jorge Jimenez sees Simon Saint and The Magistrate attacking Poison Ivy’s Eden…

…the backup Batgirls strip sees him tackling the Clock Tower.

Created by Dennis O’Neill and Joe Quesada in Sword Of Azrzel #1, Gotham Clock Tower is a large clock tower in Gotham City.. Constructed and owned by Wayne Enterprises and fortified against earthquakes, it was able to withstand the earthquake that leveled Gotham and used by Barbara Gordon as her living place and base of operations as Oracle. The Clock Tower was also used as meeting point for the Bat-Family during No Man’s Land and also as a base of operations for the Birds of Prey.

Barbara also installed a maximum security system in the Tower to protect herself as well as the many records and files she had saved over the time on her duty as Oracle. The security system consisted of traps like lasers, trap doors, electrified fences, flashing lights, sliding staircases and more.

During the 2004 crossover event Batman: War Games, Black Mask commandeers Oracle’s computers and satellites and engages in a fight to the death with Batman. In order to prevent Batman from killing his adversary, Oracle initiates the Clock Tower’s self-destruct sequence, provoking Batman to rescue her rather than continue the battle. This results in the destruction of Gordon’s home and headquarters in the clock tower and Oracle relocated to Metropolis afterwards. And in the 2011 New 52, Barabara Gordon became Batgirl, with no need for a clock tower base.

In the TV series Gotham, the Gotham Clock Tower was blown up by the terrorist Jeremiah Valeska in order to show that he was serious about his threats to the GCPD.

In the comics in 2019, it was rebuilt in Burnside, as part of Wayne Industries revbuilding of Gotham and Barbara Gordon moved back in as she assumed the role of Oracle again.

But in today’s Batman #116, without Barbara Gordon on the scene, the other Batgirls become a target. And targets get blown up.

They may have got away but everything Barbara Gordon had in the Clock Tower is gone.

And it’s even used as propaganda by the Magistrate…

A change to the Gotham skyline… but to be fair, that clock tower has a history of being there – and not being there. How soon before they pop up another one? Or maybe you might want to keep an eye on the real thing?

BATMAN #116 CVR A JORGE JIMENEZ (FEAR STATE)
(W) James Tynion IV, Becky Cloonan, Michael W. Conrad (A) Jorge Jimenez, Jorge Corona (CA) Jorge Jimenez
The only thing standing between an insane, heavily armed Peacekeeper-01 and a high body count in Gotham City is Batman. Their first bout didn’t go well for the Dark Knight, but the city is on the line and he can’t let the Scarecrow’s master plan come to fruition…and whose side is Miracle Molly truly on? The penultimate chapter of “Fear State”! Backup: With the Bat comms unreliable, Oracle has instructed the Batgirls to stay in the Clock Tower while she and Nightwing investigate who’s behind the Oracle Network hacks. But with the Magistrate’s forces instructed to attack the Clock Tower, will the Batgirls make it out before it’s too late?
Retail: $4.99 In-Store Date: 11/2/2021

BATGIRLS #1 CVR A JORGE CORONA
(W) Becky Cloonan, Michael W. Conrad (A/CA) Jorge Corona
Um, hello—you didn’t actually think we’d keep you waiting this entire year without giving you the Batgirls series we’ve all been wanting for forever, right? No way, we love you too much—just like Batgirls Cassandra Cain and Stephanie Brown, who are only able to navigate the dark, gritty, and oftentimes scary city of Gotham by leaning on the bright light that is their best-friendship. Mentored by Oracle, the Batgirls move to the other side of town where Barbara Gordon can keep a better eye on them while the hacker Seer is still invading their lives. Steph may be too rash sometimes, and Cass doesn’t speak much—but what they lack in similarities they make up for with their mutual respect and love for each other…and what makes them stronger together as Batgirls! And they may be good at kicking ass, but they are just trying their best to be normal teenagers—who’ll borrow the keys to a muscle car that belonged to a bad guy and perhaps give it a joyride around town without a driver’s license, then race to get back home to Oracle by curfew…! Splashing the pages with bright colors against a dark backdrop of Gotham, Batgirls is the pizza slumber party of the year you don’t want to miss! Retail: $3.99 In-Store Date: 12/14/2021

BATGIRLS #2 CVR A JORGE CORONA
(W) Becky Cloonan, Michael W. Conrad (A/CA) Jorge Corona
Bondo! Bondo! Bondo! With their new secret muscle car and their new secret patrol route, Batgirls Cassandra Cain and Stephanie Brown find moving to their new neighborhood—thanks to Oracle instructing them to “lay low”—that much easier to bear because they have each other. Steph begins witnessing some strange actions through the window of the building across the street and can’t help but investigate if the recent murders are connected to them! Meanwhile, Oracle realizes the most effective way for the girls to wear her newly upgraded comms is by piercing their ears, and Cass freaks out!
Retail: $3.99 In-Store Date: 1/11/2022

Dark Horse and CCP Games continue partnership with new EVE Online digital comic miniseries
Halo Infinite February 2022 event may have leaked way ahead of time
Marvel Teases The Future Of The Avengers – “Beware The Ant-Man”
Past is Present: DeConnick and Jimenez Tell the Story of the Amazons
OKA Gaming reveals Samsung as official partner for Clash Royale finals