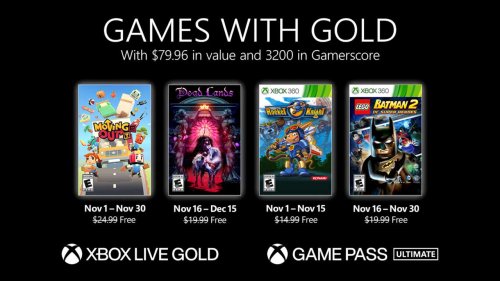 Another month has gone by and yet again the power of Xbox has continued to keep us gamers sorted, with a host of new titles popping up on a near daily basis. But that doesn’t mean there isn’t space for a freebie or four, and with the Xbox Games With Gold titles for November 2021, players will find access to some rather neat little free downloads. Want to know what they are?

Coming in hot on the heels of Aaero, Castlevania, some Resident Evil madness and Hover which all went free through October, November’s Xbox Games With Gold offerings are, on the face of it, pretty good. Yes, we’re massive fans of Aaero as a musical masterpiece, and there’s never a time when we won’t enjoy scaring ourselves silly with Resident Evil, but the free titles coming our way through November more than make up for those games going back up in price – I mean, you can’t go wrong with a bit of Moving Out and some LEGO Batman.

In fact, we think that November’s free Xbox 360, Xbox One and Xbox Series X|S games will be of interest to a wide range of player, with something for everyone on the table…

Whether it’s the removal madness of Moving Out that you’re mostly interested in, or whether you are looking to play through LEGO Batman 2 for the hundredth time already, with the price tags being removed via Games With Gold, never has there been a better time to fill your Xbox library.

Of course, you’ll need a valid Xbox Live Gold membership in order to make the most of the Games With Gold love, but we’re guessing you have one of those already. If you don’t, well, you’re missing out on a ton.

If you do, make sure you get actioning the downloads of each of the free Xbox Games With Gold titles for November as and when the price gets stripped. We’ll be sure to remind you mid-month.

In the meantime, if you haven’t yet download Aaero or Resident Evil Code: Veronica X then time is fast running out. We’d advise you grab Hover right now too, as even though that still has a few weeks of free love left in it, those days will pass before you know it.

We’d love to hear what you think of the free Xbox Games With Gold titles for November 2021. Hit us up in the comments below.

Warhammer 40,000: Battlesector and 5 others hit Xbox Game Pass. Hail the God-Emperor!
RECAP: Riverdale S6E2 – Chapter 97: Ghost Stories
Halo Infinite: Here’s What Is In The Shop This Week
NSE and Barclays renew partnership
Sting to perform song from Arcane, the League of Legends’ animated series, at The Game Awards 2021