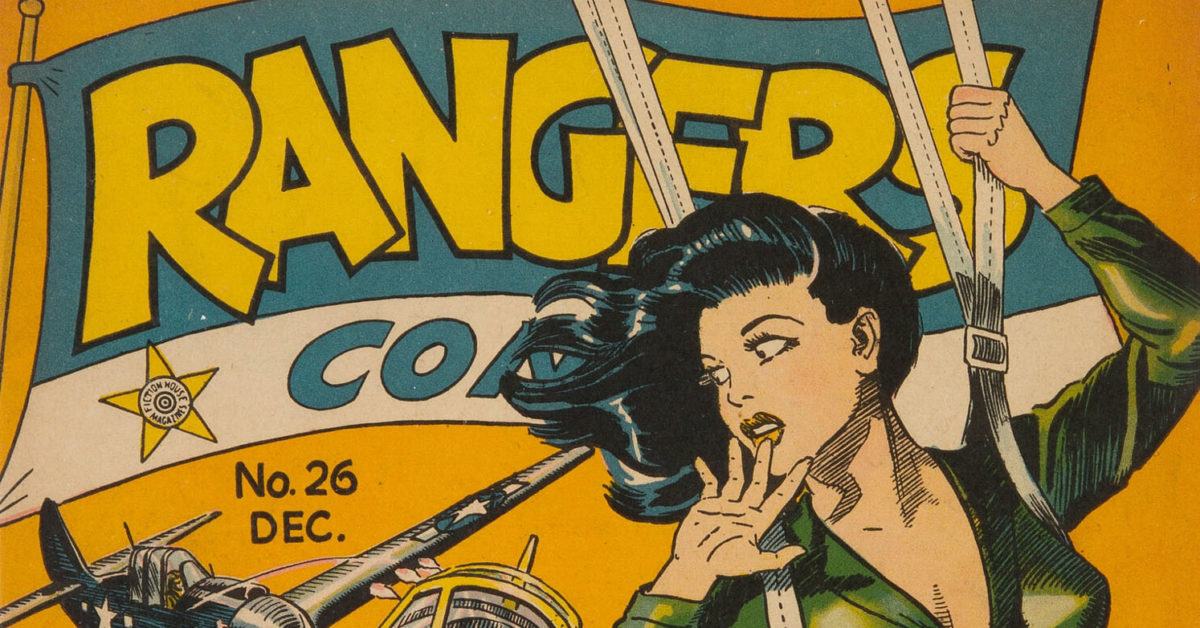 Fiction House’s Rangers Comics was originally titled Rangers of Freedom Comics.  The series featured a fairly typical if well-executed war-era team of superheroes fighting a Nazi supervillain called the Super-Brain.  But America’s entry into WW2 changed all that.  The title changed into a more typical kind of war comic with some spectacular good girl covers.  Like many Fiction House titles, Ranger Comics is very underrated among vintage collectors, but there are a number of excellent examples of the Rangers Comics series available today in the 2021 October 31-November 1 Sunday & Monday Comic Books Select Auction #122144 at Heritage Auctions.

Beginning in Rangers Comics #5, Fiction House incorporated events surrounding the impetus for the United States’ entry into the war — the bombing of Pearl Harbor — into the backstory of the saga it used to change the direction of the series.  As the title splash page of the Rangers story explains in that issue: “On December 7, 1941, a treacherous snake coiled and struck at the democratic nations, a small band of U.S. Marines, stationed on the Malayan Peninsula, suddenly found themselves cut off from the British base at Singapore. Facing Annihilation at the hands of a far superior… force, they dig in on top of a small hill.”

The inspiration for the story appears to be based on a combination of events in the wake of December 7, perhaps most prominently a single detachment of Marines defending the U.S. embassy in Beijing on that day. Notably, Rangers Comics #21 is also the first appearance of the Western-era comic book character Firehair.  And of course, this series is also highly sought-after by collectors due to its Good Girl covers by Joe Doolin among others, and interior art by George Tuska, Lee Elias, Lilly Renee, and many more. Historically important comics that are always in demand by collectors, several issues of Fight Comics are available in today’s 2021 July 25-26 Sunday & Monday Comic Books Select Auction #122130 from Heritage Auctions.

View the certification for CGC Certification ID 2014624005 and purchase grader’s notes if available.