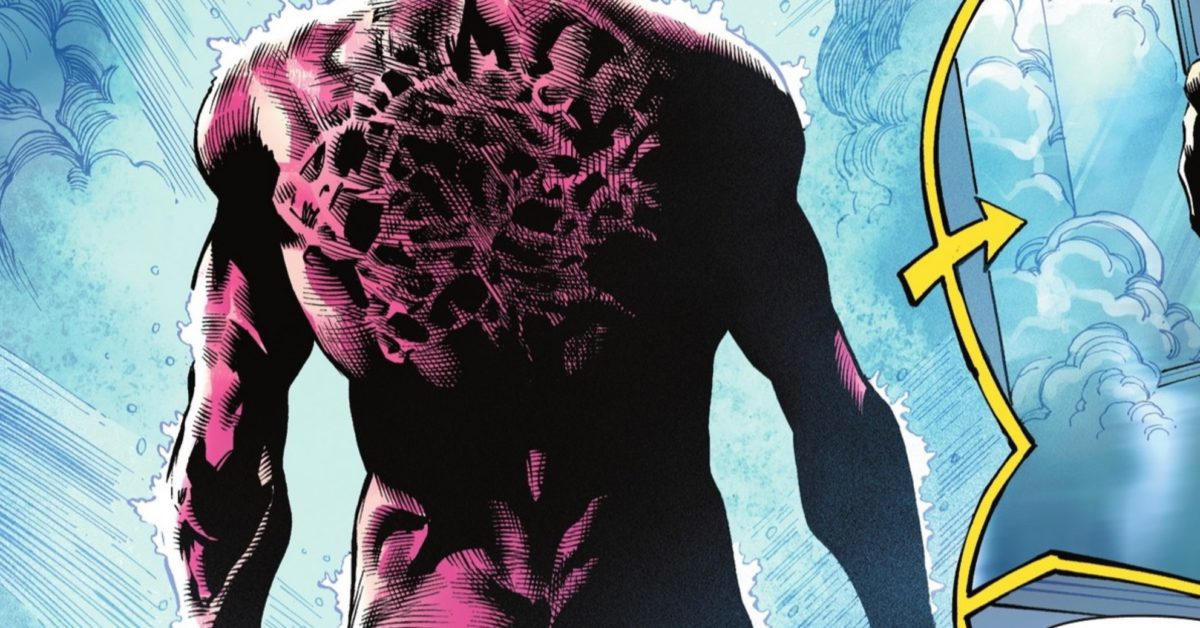 Jason Todd has been what you might call through the wars. Beaten to death by the Joker, scarred with acid by the Joker, either put under the autopsy knife and brought back to life by a Lazarus Pit, or clawed his mistakenly dead body from a shallow grave, depending on your canon, finding himself resistant to pain and going through whatever experience he might need to to try and experience it again. It’s not been a particularly easy life for this Robin. And now, leading a team of crack zombies made up of Bane, Mr Bloom, Man-Bat and the like we get to see just how close to the grave Jason Todd has come.

So we have a naked Jason Todd in the kind of pose more associated with Dick Grayson, with his back scars looking far worse than in other recent portrayals, such as The Three Jokers.

It’s less a scarring, more a topographical map of his life. But as Mandy Gledhill beautifully sang, it’s not about your scars, it’s all about your heart.

God call Damian. But there may also be some doubt as to just who was engaged in prurient Jason Todd ogling as well…

No, no one ever is. Gotham is all one biug subtweet,

TASK FORCE Z #1 CVR A EDDY BARROWS
(W) Matthew Rosenberg (A/CA) Eddy Barrows
In life, they’ve terrorized the people of Gotham. Now, they are Gotham’s last hope. Task Force X saw villains working their way to freedom. Task Force Z will see dead villains working for a new chance at life! On A-DAY, the attack on Arkham Asylum left hundreds of Gotham’s most cunning and deranged criminals dead…now, a mysterious benefactor has activated the government’s TASK FORCE clause to bring them back as the ultimate army of the night! To lead this team of the undead, only a person who knows exactly what it feels like to be brutally murdered and brought back to life can handle the job…enter: RED HOOD. But when Jason Todd unravels the mystery surrounding Task Force Z’s creation, will he try to destroy it…or embrace it? BANE. MAN-BAT. THE ARKHAM KNIGHT. SUNDOWNER. MR. BLOOM. RED HOOD. THEY ARE TASK FORCE Z, AND DEATH WAS JUST THE BEGINNING…! Retail: $3.99 In-Store Date: 10/26/2021

ROBIN #7 CVR A SIMONE DI MEO
(W) Joshua Williamson (A) Gleb Melnikov (CA) Simone Di Meo
It was the smooch heard ’round the world…and it’s the one thing Damian Wayne DIDN’T see coming his way in the Lazarus Tournament! As Robin battles for the secrets of eternal life against the deadliest killers on the planet, can he—will he—DARE HE—survive…a girlfriend?
Retail: $3.99 In-Store Date: 10/26/2021