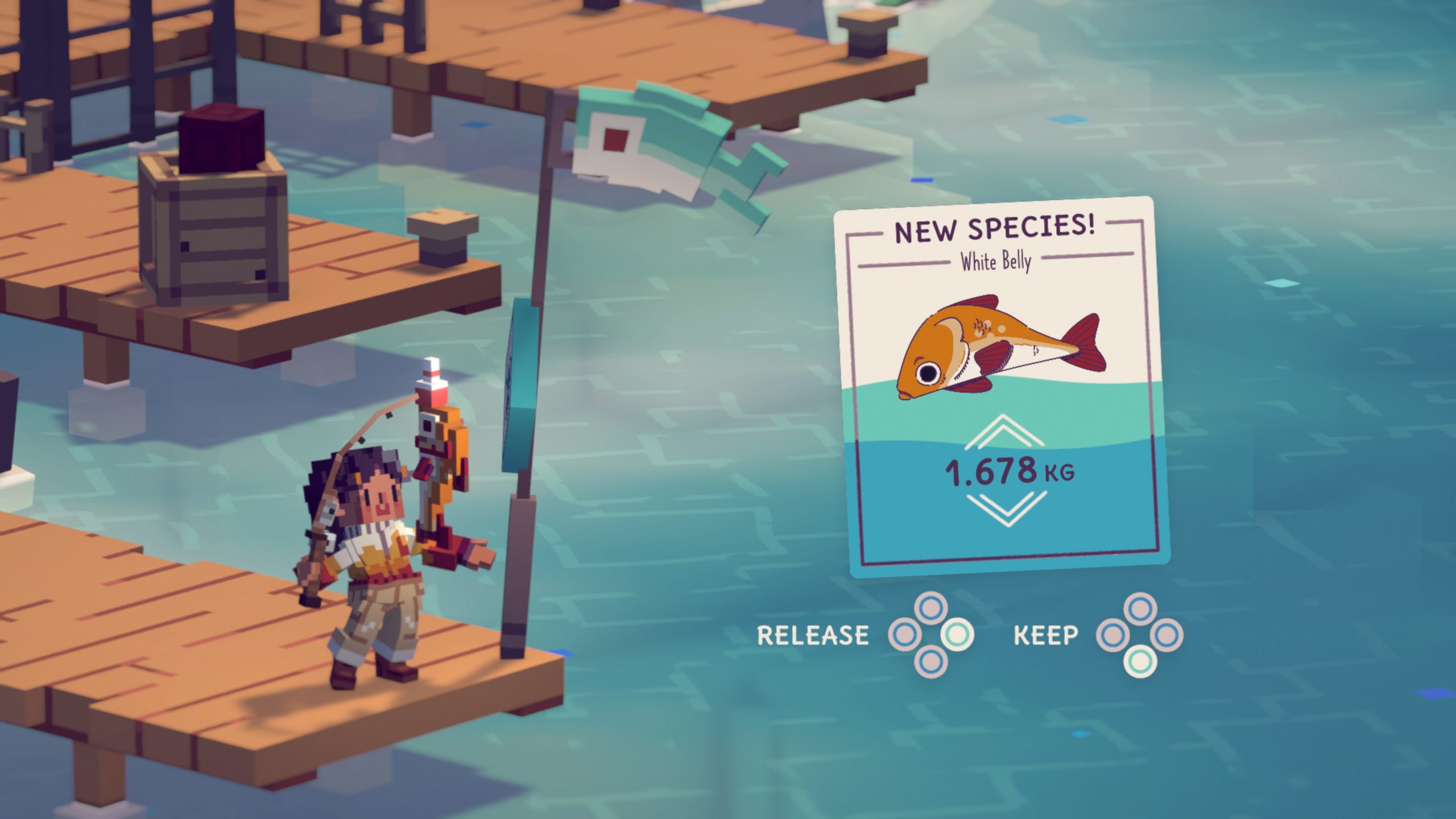 From the instant Moonglow Bay was announced back in March 2021, we knew Bunnyhug Games and Coatsink were on to something special. Now we finally get the chance to experience that slice-of-life fishing adventure as we take a trip to Moonglow Bay on Xbox, PC, via Play Anywhere and through Xbox Game Pass.

Available to purchase and download right now from the Xbox Store for Xbox One, Xbox Series X|S and PC, Moonglow Bay is an instant visual delight. Set with a glorious voxel artstyle, this is a game that whisks us off to 1980s Canada as we get the opportunity to prove ourselves in the angling world.

Attempting to keep a small fishing business afloat, the town of Moonglow is one that promises much, from chats to the folk of the land, to heading out on fishing trips, to selling your goods and to uncovering the secrets behind the Mystical Monsters of Moonglow.

It’s the fishing which is the real star and with more than 100 species to land, and various techniques and skills required in order to do so, how you go about spending your time in Moonglow Bay is totally up to you.

With Xbox Game Pass free love as standard, Xbox Play Anywhere support meaning you can pick up and play across console and PC, and a wonderfully created experience all waiting to be enjoyed, we’re not really sure how anyone can ignore the draw of Moonglow.

Stay tuned for our full review of how Moonglow Bay plays out on Xbox Series X|S in the coming days. For now though, you can get in on the action yourself by visiting the Xbox Store and taking in a download. If you don’t have Game Pass, expect to pay £20.99 for it.

Should you wish to know more, give our exclusive interview with those behind the creation of this wonderful slice-of life fishing adventure a read.

Moonglow Bay is set along the Eastern Canadian coastline during the 1980s and offers players a diverse and emotionally charged story, complemented by a relaxing, slice-of-life fishing RPG. You play as a rookie angler, struggling to fulfil your partner’s final wish by keeping a business afloat in the face of impending bankruptcy. Whether playing solo or with a friend in drop-in-drop-out local co-op, you’ll need to cook your catch of the day, then sell a variety of recipes to upgrade your shop, gear, and fishing boat. Combining a playful voxel art style with a sumptuous soundtrack, your journey is split into several distinct story arcs featuring a fully-inhabited town to traverse and the potential for epic encounters with the rumoured Mystical Monsters of Moonglow. With your journal and rod in hand, explore the furthest reaches of the ocean, from frigid glaciers to boiling geysers, and learn to cast nets, set traps and fish through ice, documenting over 100 varied aquatic species while uncovering the secrets of Moonglow Bay.

Dauntless Now Available on Xbox Series X|S
A Year of Free Comics: Close encounters of the weird kind in HELION
PlayStation VP fired following a sting by a pedophilia vigilante group
Mini Review: The Binding Of Isaac: Repentance – A Welcome Rebalance For The Roguelite Classic
Jupiter Nettle & The Seven Schools of Magic Sold At Auction To Viking