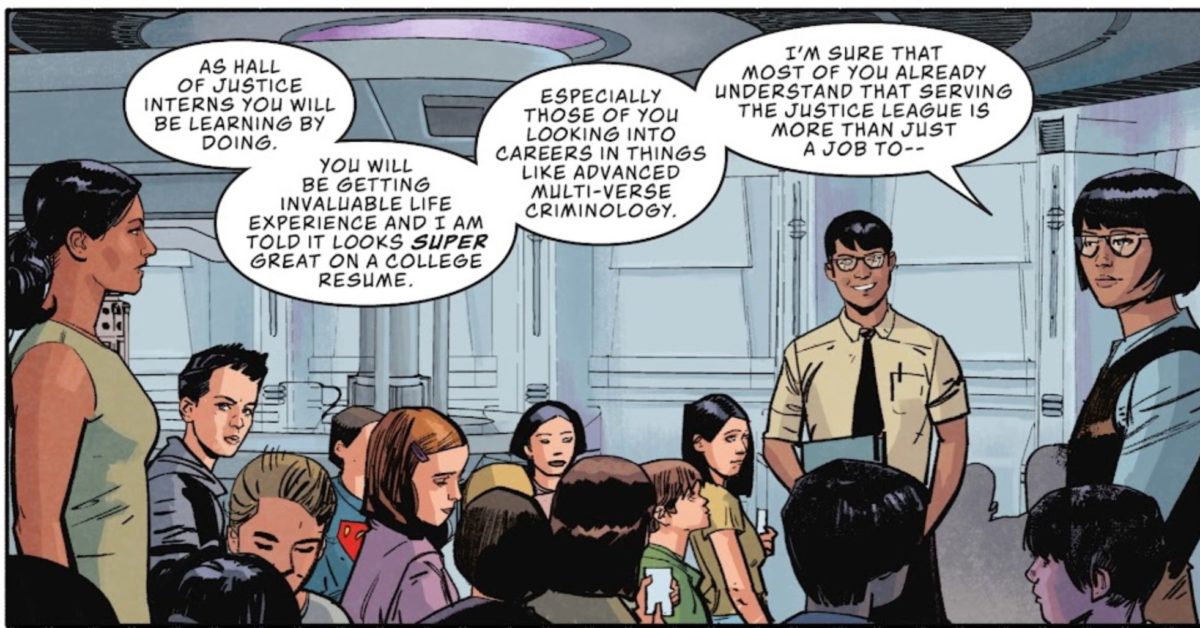 One of the features of the Infinite Frontier era of DC Comics continuity is that the citizens of DC Comics have a lot more knowledge about what’s going on in the world. All the worlds. Everyone knows there’s a multi-verse and as well as suffering from crisis to crisis, there are commercial opportunities, such as a beer brewed using hops and barley from different parallel universes, blended together. Seriously these microbreweries are getting out of hand when they become meta-breweries. And in today’s Checkmate #5 by Brian Bendis and Alex Maleev, not only do we encounter a collection of Hall Of Justice interns working for the Justice League and getting a Wonder Tour, we learn about new careers available to DC Comics citizens as a result.

Advanced Multi-Verse Criminology? Might that include forensic dimensional vibrations located at the scene or from a suspect? Do multi-verse citizens leave trace elements of their parallel universe behind like one might a fingerprint? Or what might happen if criminal law differs from dimension to dimension? What is the extradition process? Jurisdiction decisions? Do representatives from a parallel dimension have diplomatic immunity? Or maybe internal may have different priorities and needs?

Unlimited free snacks. Say, that’s not coming from a portal into a parallel world that is entirely made up of cheese sticks, sliders, and celery dip is it? Or is that part of the Dark Multiverse? Anyway, any chance of DC Comics considering a take on the late Batton Lash series Supernatural Law/Wolff & Byrd: Counselors Of The Macabre by way of Alan Moore and Gene Ha‘s Top Ten? After all, in today’s Batman Fortnite One-Shot, there seems to be a need…

Someone should really get that on the statute books.

CHECKMATE #5 (OF 6) CVR A ALEX MALEEV
(W) Brian Michael Bendis (A/CA) Alex Maleev
THE DAEMON ROSE IDENTITY…REVEALED! Ripped from the pages of Justice League! As Checkmate digs deeper, it’s obvious that what Leviathan is selling is a dirty lie that cannot sustain itself…so Checkmate has to…INFILTRATE LEVIATHAN. But with Checkmate being so outside of the system, once any of them go undercover, they are officially…not on our side.Retail: $3.99 In-Store Date: 10/26/2021

When is the Fortnite Chapter 2 ‘The End’ live event?
Sonic Steam page has updated the number of games leading some to believe in a Sonic Frontiers reveal soon, also newly registered domain
DELF2021: Breaking the limits of esports entertainment
Who Needs Rainforests When You Can Have Sweet Darkhawk NFTs?
Always Sunny Vs Joe Rogan in The Daily LITG 3rd December 2021