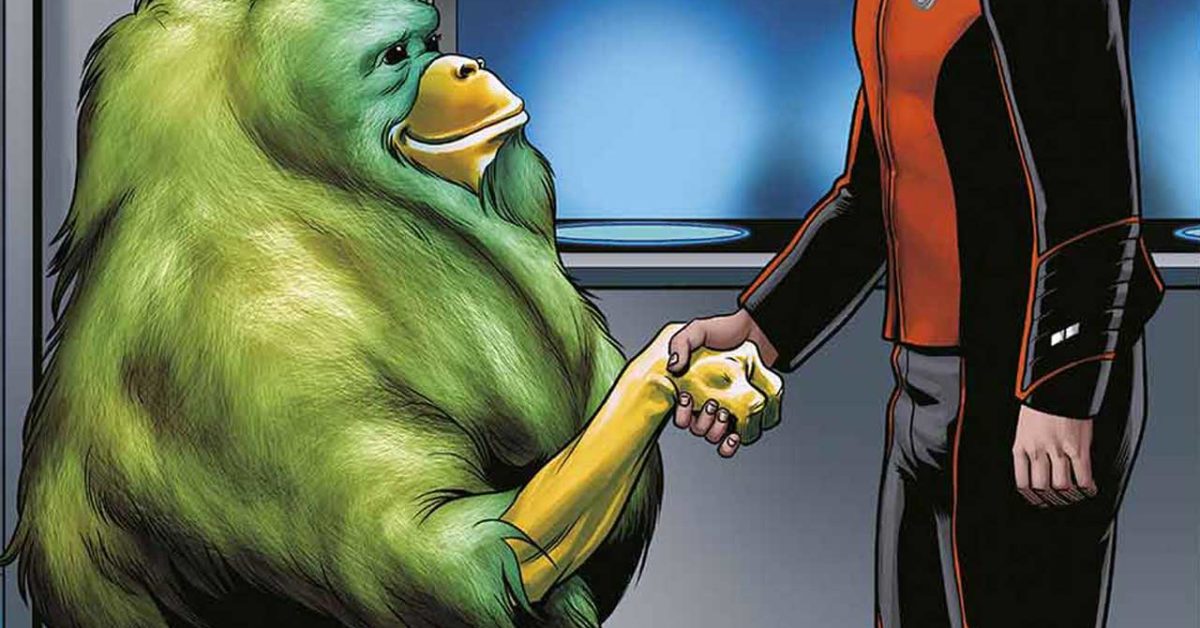 By telling a straightforward science fiction yarn and overlaying the wildly charismatic characters from the TV series, The Orville #1: Artifacts completely understands the assignment. This issue is a winner with a fully realized adventure, great character moments for many of the players involved, and absolutely sumptuous visuals.

The Orville is docked at a space station from their federation of sentients, called The Union. The captain and his slacker-minded helmsman/best friend run into an old professor who has a line on an ancient mystery hidden in the stars. Each one of them reacts differently to this blast from the past, and that framing actually serves the story as it moves into the unknown.

There’s also a super complex personal relationship here that plays into the disposition of the catalyst character. This wonderful, weird science fiction presentation gives Gordon a chance to play against type, which is so much of a nice surprise.

The script by David A. Goodman — who would certainly be the one to know these characters and this universe — balances every element perfectly, with John hitting a perfect one-liner in a meeting, Gordon being perfectly in character. And even Ed’s decision-making process was shown. The artwork from David Cabeza, Michael Atiyeh, Richard Starkings, and Jimmy Betancourt presents an almost screen-ready, hyper-accurate look at the universe of The Orville, and there’s a scene late in the book that really hits hard with that “relative” realism.

The best part is that this is a complete story. You surely want to see what’s next, but if you don’t, you have a beginning, middle, and end of this story. That’s a great accomplishment in and of itself, given how enjoyable that trip is. This is a great book. RATING: BUY.

The Orville #1: Artifacts
By David A. Goodman, David Cabeza, Michael Atiyeh
When Ed bumps into his old astro-archaeology teacher, the professor asks for assistance in his pursuit of the lost fleet of the Zankon, whose systems-spanning empire rose and fell millions of years ago, according to legend. However, doing so means taking the Orville into a system so hazardous no ship has ever successfully navigated it.

Review by Hannibal Tabu
Adventure awaits in deep space as an old college professor has a clue about an ancient mystery to be solved … but at what cost?
Dave Marshall, Konner Knudsen