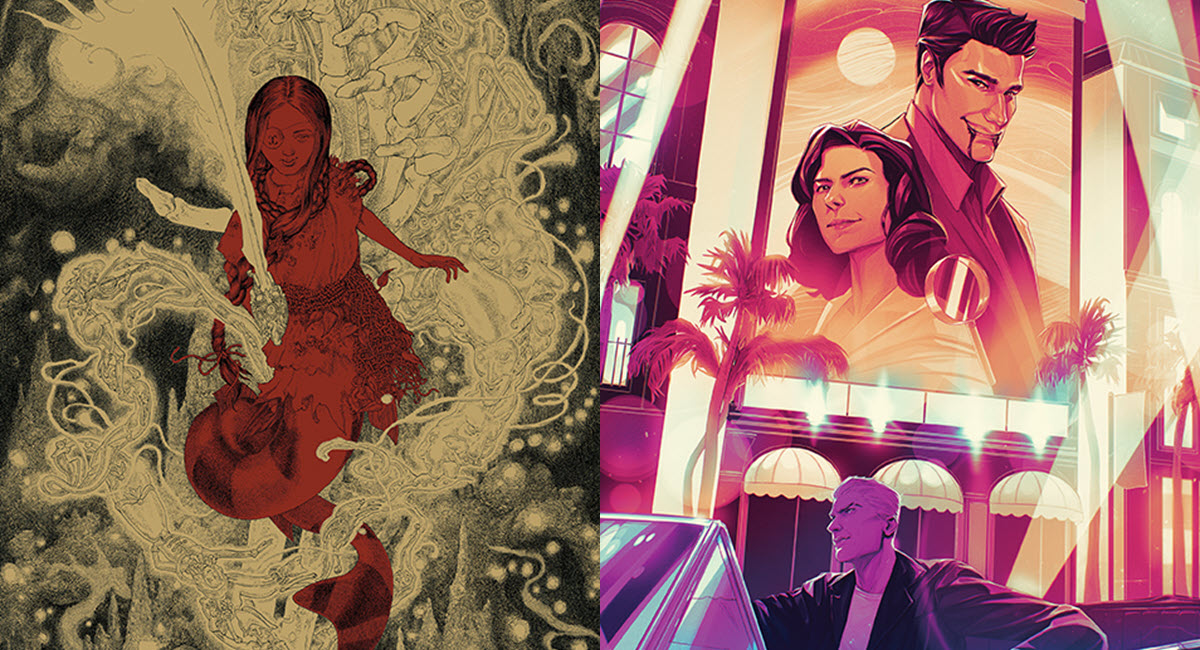 Boom Studios has released their solicitations information for titles scheduled to ship in January 2022 and beyond. Included among the publisher’s offerings are the return of Jeremy Bastian‘s Cursed Pirate Girl, and the debut of a new Angel series by Christopher Cantwell and Daniel Bayliss.

All that and much more in the full Boom Studios January 2022 solicitations. Check out the information and cover images below.

Synopsis:
● In the long awaited continuation of Cursed Pirate Girl, her loyal companion Pepper Dice reveals that there’s still time to bring back her father, the Pirate Captain Douglas!
● If she can escape the Sea King’s Palace with The Bright Star, will she be bold enough to enter The Devil’s Cave in the hope to bring her father back? Or will the Devil Jonah and his minions stop her?

Synopsis:
● Welcome to Detective TV, starring Angel and his co-star—Cordelia!
● But wait, Angel isn’t just a celebrity? No, he leads a double life… as a real monster hunter for Angel Investigations!
● Sometimes this double life can get his friends in trouble. As Wesley is recovering from a horrific curse, Angel stumbles into a series of supernatural events, and finds himself sucked into an unexpected and mysterious world.
● He soon faces a terrifying enemy, who sees him as an intruder…

Synopsis:
● After a coven rally meant to heal the atmosphere ends in tragedy, Thessally seeks out Buffy guided only by instructions from an old friend.
● Despite their shared past, Buffy refuses to train her. Instead, she delivers Thess to The Watcher’s Council, certain they’ll be more suitable guardians.
● But the Council isn’t what they seem, putting Buffy and Thessally in peril, until the intervention of three hooded figures…

Synopsis:
● The Multiverse Scooby Gang shows up to help fight Silas, now on their own terms.
● But their plan is upended when Buffy has her memory stolen and leaves her companions behind to battle him on their own.

Synopsis:
● With the Alliance onslaught defeated, Kaylee faces the grim choices… and sacrifices involved in saving the Earth That Was.
● Which of the crew will follow their Captain, ready to make peace with the past and face what future the ‘Verse holds for them?
● And if our heroes can take care of the Alliance once and for all, what destiny will the Washbot choose?

Synopsis:
● When notorious outlaw Mal Reynolds agreed to wear a sheriff’s badge, he figured he could change a thing or two about how “justice” is dispensed in the ‘Verse. But his former crew members on Serenity are about to find out how it changed him–when he throws them in jail!
● But Mal may have met his match in the Bandit King, a new outlaw determined to take Mal’s old position as the most incorrigibly independent law-bender around. Has Mal finally met his match?
● New York Times best-selling writer Greg Pak (Darth Vader) and rising star artist Lalit Kumar Sharma (Daredevil) present the next exciting chapter continuing the acclaimed television series.
● Collects Firefly #16-20.

Synopsis:
● It’s open war on Amonkhet as the Planeswalkers battle an entire plane’s worth of ravenous undead.
● The plan is made and the stage is set, but against overwhelming odds and with Marit Lage’s arrival imminent, can they unite to stop her once and for all?
● And with stakes unlike anything the Multiverse has seen before, can our coterie of heroes be victorious without paying the ultimate price?

Synopsis:
● Discover the truth behind the Phantom Ranger, the Morphin Masters, Power Rangers, and the Morphin Grid itself in the series that will unlock the secrets of the Power Rangers Universe!
● In the ancient past, six teens scramble inside the Masterforge to save a mysterious figure they rescue from the Morphin Grid.
● But in doing so, they strand themselves from their parents, the Morphin Masters, who ascend into the Grid itself to protect it from Dark Specter.
● Can they protect Earth and the Grid itself from the impending forces headed their way? That question will have to wait, because first they must defend themselves against…a T-Rex attack!

Synopsis:
● On the moon, the epic, long-awaited battle is finally here as Zordon and Lord Zedd go head-to-head!
● As the Empyreals are unleashed, the Rangers must summon every weapon at their disposal to stop them from cleansing Earth.
● Can Matthew and Tommy put their differences aside to avenge their fallen comrades? And what other unexpected alliances will be formed in the desperate attempt to stop the Empyreals?

Synopsis:
● With the fate of Earth and the Zeo Crystal hanging in the balance, unexpected alliances are formed to stop the Empyreals and their master!
● On Earth, the Zord battles continue, culminating in the Omegazords finally coming together in a never before seen form!
● Will it be enough when all seems lost? And when every twist is revealed who will stand victorious in this pulse-pounding conclusion of The Eltarian War… and who will die?

Synopsis:
● Don’t miss your chance to own the new, special editions of the entire “Archer’s Peak” saga that launched the phenomenon Something is Killing the Children in the first of three “Slaughter Packs.”
● Contains Something is Killing the Children #1-5 by Eisner Award-winning writer James Tynion IV (The Department of Truth, The Nice House On The Lake) and artist Werther Dell’Edera that first introduced Erica Slaughter and the Order of St. George to the world.
● Each issue features a brand new, exclusive painted cover by Eisner Award-nominated artist David Mack (Daredevil, Kabuki) on premium card stock.

Synopsis:
● Jace embarks on the life or death trial that all White Masks must undergo… the Ritual Hunt.
● Meanwhile, Aaron is torn between his burgeoning feelings for Jace and his duty to the House, but not for long — if Jessica Slaughter has anything to say about it.

Synopsis:
● Diana, the ethereal, larger-than-life feminist commune leader, prepares Marion to become the vessel for all of the rage and suffering of the commune — and of women everywhere.
● Marion and the other women on the commune take their revenge on Chuck and Howie as scapegoats for the sins of mankind.
● But will their brutal justice resolve the seemingly endless cycle of violence, or will it continue until it devours the entire island—and perhaps even the entire world?

Synopsis:
● Following a message from Regan, Hannah rushes to stop the Chimera as they unleash a deadly attack at a shopping center.
● But are Barret and the amassed Faithful playing a more sinister game of chess, which will leave Hannah and Regan cornered… unable to escape?

Synopsis:
● After learning that Sonny Germs is the double for the suspected assassin, our crew tails Oswald’s police escort to the station…where Oswald is surprisingly shot upon leaving.
● Later, the four follow his ambulance and gain access to his body to do the switch.
● But after realizing how seamless the process was, they question who Frank works for, and how high up it all goes…

Synopsis:
● Bridgette, Duncan, and Rose – along with the entirety of Britain – are dragged into the Otherworld. It’s a land of predatory monsters and things seem like they can’t get any worse.
● But of course they can. A rival king rises to confront Arthur, plunging the land into civil war… and both pursue Bridgette, Duncan and Rose as they travel across the land, desperately trying to find a way to return Britain to its senses…
● New York Times bestselling writer Kieron Gillen (Die, The Eternals) joins Russ Manning Award winning artist Dan Mora (Detective Comics) to present the next chapter in the Hugo and Eisner Award nominated series.
● Collects Once & Future #19-24.

Synopsis:
● The civil war continues to rage in Otherworld as both Arthurs face off against one another!
● Meanwhile, Bridgitte and Duncan seek out a secret weapon against their royal foes—a true man of the people by the name of… Robin Hood.

Synopsis:
● Eva and Caspar escape the Seekers’ Headquarters, but the secret of Caspar’s identity threatens the bond between them.
● Can they find Amon in time before he uses the Books of Nostradamus to unleash his ultimate plan?

Synopsis:
● Rising stars Matthew Erman (Power Rangers: Sins of the Future) and Stefano Simeone (Mega Man: Fully Charged) introduce a world where Luck is measurable and has tangible effects on reality.
● Artie, Cherry, Hilde, and Joseph are The Unfortunates, a group of teens with absolutely no Luck who are part of a government program dedicated to understanding and controlling Luck.
● The world changed with the discovery of the Constellations — mysterious beings who can seemingly control the very nature of Luck and its cosmic, probability-warping effects.
● The Unfortunates must travel to the Kismet Zone created by the Constellations to understand the true nature of Luck and find a way to get the world back in order. Of course, with zero luck, the odds aren’t exactly in their favor.
● Collects Good Luck #1-5.

Synopsis:
● Toba’s idyllic view of Buckhead has been shaken after he witnesses strange experiments, kidnappings, and more of the mysterious men in black suits.
● Following a lead, Josue and Toba discover the unexpected connections between the Elseverse game’s purpose, origins, and someone close to Toba.
● There’s more to Elseverse and Stone Industries than Toba originally thought—much more, and the town is in danger.
● Toba is no match for the goons and the intelligence, Ewon. But maybe with the mysterious girl he’s been seeing around town, he might stand a chance…

Synopsis:
● In the fantastical world of Esseriel, Wynd’s magical blood is forbidden within the limits of Pipetown.
● Wynd’s journey will lead him and his friends into the high seas surrounding Esseriel, and eventually deep into the forest realm of the Faeries. Is Wynd up to the task of the dangerous quest ahead, and will the bonds of friendship weather the storm that comes with it?
● The GLAAD Award-winning team of Eisner Award-winning writer James Tynion IV ( Batman, The Backstagers) and artist Michael Dialynas (Teenage Mutant Ninja Turtles) present the second chapter of the fantasy series about spreading your wings no matter the dangers put in your way.

Synopsis:
● Aoe, Thel, and Gen, better known as The Lovely Trio, first burst onto the scene five years ago when they saved Earth from a surprise space monster attack.
● Everyone idolizes them as super-heroic pop icon magical girls, including Gigi, whose brother died as a bystander in one of their battles. But when Gigi witnesses the Lovely Trio battling a monster firsthand, she sees something that causes her to question everything she thought she ever knew about her heroes, and the “monsters” they fight, who may not be monsters after all!
● What she learns just might save the world, but only if she can survive the Lovely Trio herself in this magical new graphic novel from the team behind Pandora’s Legacy, writer Bones Leopard (Identical) and artists Kelly & Nichole Matthews (Just Beyond).
● Collects Save Yourself! #1-4.

Synopsis:
● Dizzy and the rest of The Rollers have had a quiet couple of days, tracking any possible Negatrix activity and getting Dizzy ready for the big skating competition.
● But as Dizzy’s confidence in her abilities climbs, arrogance becomes a mask for self-doubt, to the detriment of her friends.
● Even as Dizzy starts to doubt herself, and pushes her pals away, she realizes that Mayor Fox is infected by the Negatrixes and is spreading their negativity all over town!
● But before she can get her thoughts in order, Dizzy discovers a dark, unexpected secret behind her ‘Burb Defender identity at the worst possible time… when her powers run out of charge…