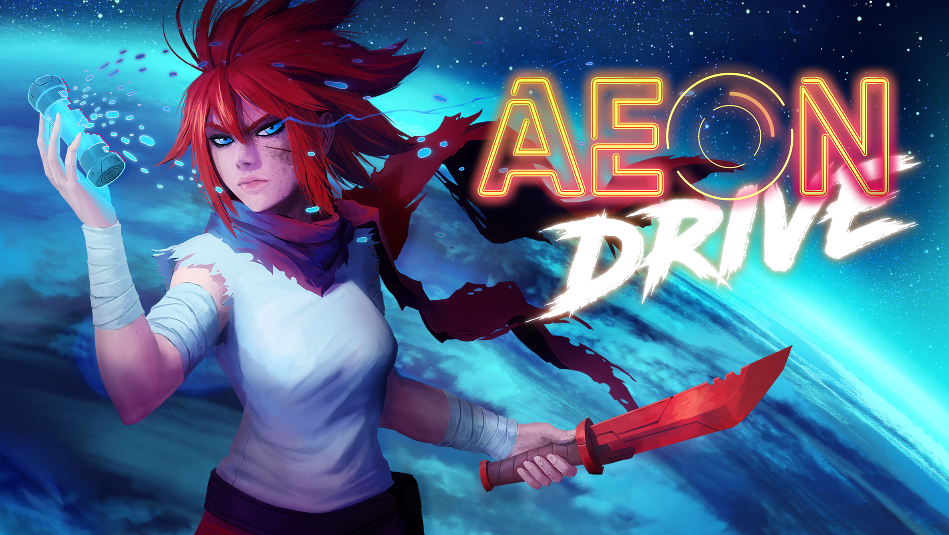 Most games become speedrunning favourites, not by design, but because the community latches onto them. If you have a favourite game, it’s likely that Games Done Quick and a group of speedrunners have dissected it for the shortest possible completion.

But there aren’t many games that are built from the ground up to be speedrun. Aeon Drive, sequel to Dimension Drive, is not only built for that community: it’s got dedicated and respected speedrunners already parkouring through it, setting times, posting videos and creating competitions.

So, how do you build a game for this purpose? We sat down with David Jimenez, Lead Game Designer and Co-Founder of 2Awesome Studio, to find out.

How would you pitch Aeon Drive?

Aeon Drive is a fast-paced platformer with a speedrunning twist! Imagine that you are watching a really impressive, exciting speedrun on YouTube or Twitch… But it’s you who does the speedrunning! Our game is all about making you feel fast and efficient — you must complete each level within 30 seconds, and the teleportation ability allows you to perform really creative tricks to make it to the end of the level as quickly as possible.

Players might not be aware, but this is the second in the ‘Drive’ series, after Dimension Drive. Would you recommend that people play Dimension Drive first?

Without getting into many spoilers, let’s say that Dimension Drive had an unexpected ending for Jackelyne. Aeon Drive starts a few years after the events of Dimension Drive — Jackelyne is no longer a teenager but a grown woman that has been through a lot. Jackelyne and VERA crashland in Neo Barcelona and that’s the start of their new adventure.

It’s unusual to find a series that leapfrogs into a completely different genre, with Dimension Drive being a shoot ’em up and Aeon Drive being an action-platformer. What made this large leap possible?

This is something we planned from the beginning of the series. We don’t want to restrict ourselves to a single genre or style of game. One of the core principles at 2Awesome Studio is that we want to make games with innovative mechanics. We did that with Dimension Drive, creating a dual screen shoot ’em up that allowed players to switch from one game screen to the other at will.

With Aeon Drive, we wanted to do something new again and create a platformer that was built with speedrunning in mind. So we made the teleportation dagger ability and the time manipulation mechanic. But, at the same time, we wanted to continue the story of Jackelyne and VERA while expanding the game universe we created with Dimension Drive.

We already had a space opera universe, with dimensional and time travel, several interesting alien races and locations, and our beloved protagonist. Why throw all that away when we can build on it? It seemed to be the obvious choice.

We got some Strider, Katana Zero, and even some Bionic Commando vibes from Aeon Drive’s trailers. Did you get in the mood by playing a lot of these games? Or did Aeon Drive come from another place entirely?

Thank you so much for comparing Aeon Drive to such cool games! However, Aeon Drive came from other inspirations, and most importantly it grew from prototyping and our community’s feedback. Our initial prototypes, for example, didn’t even feature the signature teleportation ability. There were even early prototypes that didn’t feature Jackelyne at all!

We got a grant from the Creative Industries Fund NL (the Dutch cultural fund for architecture, design and digital culture) to study new forms of approaching player death in video games. Through several prototypes and playtesting with focus groups we came up with the time manipulation mechanic you now see in Aeon Drive. Of course, we also took inspiration from other games. Platformers such as Celeste, Super Meat Boy, and The Messenger were some of the games we looked to while designing Aeon Drive. Mirror’s Edge and its fast parkour style gameplay also was a significant source of inspiration. For example, we knew we wanted a ground dash similar to the one in their series.

Could you tell us more about the 30-second time loop mechanic?

It’s a key aspect of Aeon Drive’s design. Everything in the game revolves around the idea that you are constantly under this 30-second time limit’s pressure. It makes you creative with your abilities and the level itself. If you fail — and it is somewhat inevitable for the first few tries — the level immediately restarts, allowing you to jump right back into action.

This one condition makes the game feel much more dynamic and fun — you are rarely able to stop and think about your following actions. You are forced to move ahead and make every decision on the go. And the time-loop narrative provides a good explanation for this dynamic: when Jackelyne fails, the loop restarts, and her new version appears, ready to try once more.

Jackelyne’s hook-teleport seems to be key to Aeon Drive, allowing her to cross the levels at fantastic speeds. Where did the inspiration come from? And was it challenging to get right?

Honestly, it’s something we had in mind for several years and we wanted to bring it to one of our games. Funny enough, it was not initially planned for Aeon Drive, but we saw the opportunity early on, and it worked so well with the time attack gameplay that it quickly became the main mechanic. We’ve heard players compare it to Celeste dash, and last year some Naruto fans compared it to the teleportation jutsu in the series.

And yes, it was one of the most challenging parts to develop in the game and to get right. Originally, players were able to teleport anywhere (even in mid-air). That version caused tons of problems and bugs while also making level design a nightmare — as we had to account for players being wherever they wanted. Later, when we restricted the technique to work only on contact, everything clicked! It solved many problems in the code, and level design now had strong roots from where to build on.

Yeah, and we believe that it already did. We are hosting the speedrunning tournament prior to the game’s release, with thousands of participants competing against each other and trying to get the best score. Many prominent speedrunners already joined it, including such legends as Distortion2, The Mexican Runner, and KarmikKoala.

We certainly do hope that this trend will only grow stronger when the game is released: we have a hundred levels, each with its own leaderboard. So, if somebody gets competitive and sets himself a goal to get into the top 100 or top 50, the game will undoubtedly occupy them for a long time.

Are you excited to see what times and scores players record? Have you got your own times ready, to see if they get beaten?

Yeah, seeing all these crazy records is one of the most fun parts of our current job — we are constantly sending each other some wild replays from Twitch and YouTube. The nature of the game encourages players to be creative with their tactics, so we often stumble upon things that we couldn’t predict ourselves!

Everyone on our team obviously plays Aeon Drive, we do compete with each other, and it’s definitely fun. But still, we do understand that our records won’t stand a chance against speedrunners and the most determined players after the game’s release. We are only the developers, after all!

4-player must be hugely challenging to implement. How do you build a level for that many players? How do you keep them all on screen at once?

We have two different game modes that support several players on screen. The campaign can be played in co-op from 1 up to 4 players at the same time. In that case, we simply kept the levels that already existed in the campaign. Aeon Drive level design is very different from your typical linear platformer.

One could say that it’s actually the anti-design for normal platformers. Instead of guiding the player through a clearly defined path, Aeon Drive levels have multiple paths that connect with each other and are actually built to get the player lost in some sort of maze, forcing them to explore. When more than one player is in the level, we use a dynamic camera that zooms in and out to accommodate all players on screen. Obviously, there is a limit to how much the camera can zoom out (the level boundaries), if that limit is reached and a player is left behind by their friends… Well, your friends just killed you, hahaha!

The other multiplayer mode is the PVP. In PVP, we have built levels that are circular looping tracks where up to 4 players can race against each other. Players can tweak the number of laps and other rules and it works very similarly to what you may have seen in car racing games but with a platformer gameplay.

The game is set in Neo Barcelona. What did you bring from the real-world surroundings of Barcelona to Aeon Drive?

Both studio founders are originally from Barcelona, and many of our team members are also from there. So, making our next game based in our beloved city was a dream come true. The different biomes of the game are based on specific real neighborhoods from the city. However, Aeon Drive is anything but realistic, we mixed and matched buildings and urban props from different areas in single levels, and we modified architecture and buildings to our liking. So, we took inspiration from the real city to create our own futuristic version of it, Neo Barcelona.

If you pay close attention to the environment, you will see emblematic buildings such as Sagrada Familia, Columbus Monument, Arc de Triomf, Torre Glories or even the Hotel Vela by the beach. We also added less obvious elements such as using street lamps, trash cans, and even big dumpsters that are a carbon copy in pixel art of the real deal. Finally, there are hidden collectibles in the game, and many of these use the real city heritage to build our own lore. We won’t enter into details to avoid spoilers, but you’ll find many surprises in the collectible gallery!

Where next for Jackelyne and the Drive series? Are there more planned? What genre will be covered next?

We aren’t supposed to uncover anything specific yet, but the answer is: yes, we have a lot more planned. The Aeon Drive’s universe is here to stay. As for the next genre — you will find out when the time comes!

And finally, if you had a teleport-hook, what would you do with it?

A speedrunning competition in real life, probably. At least it would be much more spectacular than the sports we already have!

Many thanks to David Jimenez and 2Awesome Studio for letting us delve into Aeon Drive. If you’re a speedrunner yourself, or you like a pure action-platformer, then Aeon Drive is out on Xbox One, Xbox Series X|S (fully optimised for next-gen and the Xbox Store page will sort you with a download), PS4, PS5, Switch and PC come September 30th 2021. We, however, will be taking our time with it, making sure our review covers every aspect. Expect it posted live soon.