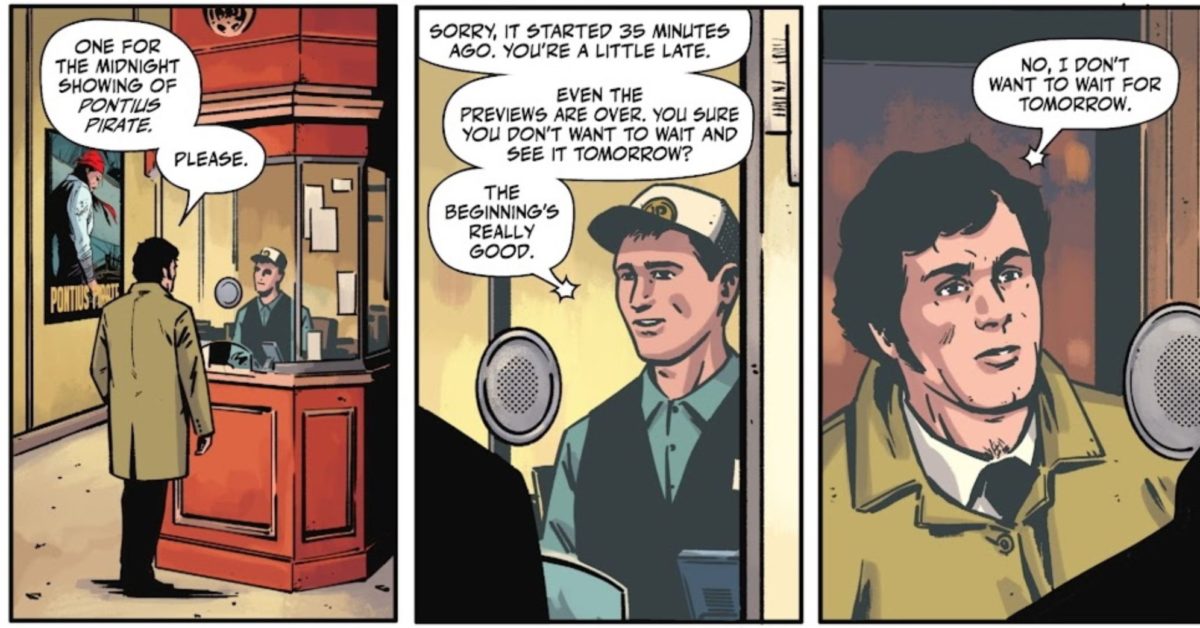 Rorschach, the unauthorised sequel to Watchmen, by Tom King and Jorge Fornes reaches its conclusion today, with the final issue #12 from DC Comics. Including a guest appearance from the creative team…

The detective has burrowed into the strange obsessive effect that Cummings has on her targets, turning them into versions of Rorschach, to wreak deadly vengeance, including Frank Miller.

And at the end of the penultimate issue it seems that, beyond the grave, she was having that effect on the detective.

As he laid out the facts of the case, playing them over and over, so she talks to him, guiding the way.

…so he started to exhibit Rorschach tendencies himself.

Today sees him take that to the next level. To answer the question, what would Rorschach do? Never compromise, not even in the face of impending armageddon. But maybe, also, go to the cinema to see the new Pontius Pirate movie…

After all, for the detective, there may well not be one. But he did it before the hands reached midnight, after all.

RORSCHACH #12 (OF 12) CVR A JORGE FORNES (MR)
(W) Tom King (A/CA) Jorge Fornes
The end to the mystery is here! It’s been a long road to get here, and there have been a lot of dead bodies along the way, but the detective is very near closing the case. All the disparate threads lead back to the crime itself, to the assassination attempt that claimed the lives of the would-be assassins. Find out how it all went wrong for the comic book artist who put on a mask and declared himself Rorschach. Retail: $4.99 In-Store Date: 09/14/2021