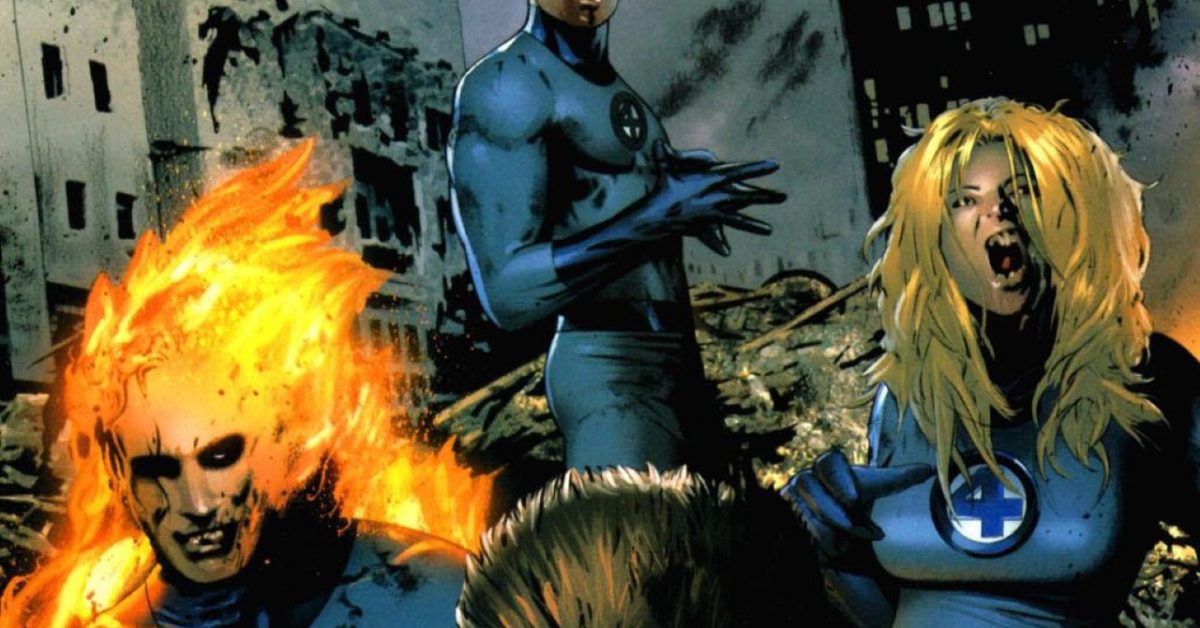 Mark Millar, known for grabbing any credits that aren’t nailed down and superglued on top, talked in his most recent newsletter about the recent episode of What If? that featured a world of Marvel Zombies, created by Janet Van Dyne, getting infected in the Quantum realm. And how he and Greg Land created them for his run on Ultimate Fantastic Four. Names after the obsessive Marvel Comics fans who would buy every singly comic Marvel published, he talked about the Marvel Comics writers/editors room he attended.

I remember telling the guys I had this idea on the plane from Scotland about a superhero arriving from another dimension with a zombie plague and biting The Avengers when they showed up to contain the problem. The Avengers then bit Spider-Man, Spider-Man bit the X-Men and so on. It all came from a sketch I did of a zombie Mister Fantastic and I loved the idea of zombies with powers, materialising through walls like Kitty Pryde or just smashing through steel doors like the zombie Hulk. Visually, it felt like something I’d never seen before and I liked the idea of a story about ordinary people trying to survive against super-zombies, Magneto being the last of the unbitten and, ironically, the last protector of the human race in the war against these creatures.

But everyone hated it. I remember it was so universally loathed and everyone thought I was kidding when I suggested it. I just smiled and took it on the chin (a writer must be thick-skinned to survive) and we moved on to the next topic, but (then senior editor) Axel Alonso thought it was funny and said we should call it Marvel Zombies if we ever do it. Joe Q at the time was trying to get me to come back onto the Ultimate Fantastic Four book. We’d had huge hits with Ultimate X-Men and The Ultimates and he needed someone to do a year on this book after Warren wrapping up, but my creator-owned stuff was starting to take off and I didn’t want to do another Marvel book. Joe suggested I do my Marvel Zombies idea as the launch storyline for the book and this absolutely hooked me, something as crazy as FF being perfect as a launchpad for any number of insane ideas.

As the art came in on the Fantastic Four title, specifically the image below by Greg Land, people around the office started to get quite excited by the idea of a zombie Marvel universe and started pitching out for ideas. I’d written the first arc and was bringing them back in my final UFF so I didn’t have much to say, but they found a fantastic team with Robert and Sean doing the spin-off book, which ran over multiple series. They also spawned zombie cover months, toys and statues, endless Marvel Zombie cosplayers and now not only this What If episode, but also (if my sources are correct) a little live-action Marvel Zombies further down the line, but you never heard that from me. As I should have remembered when this got bumped at that meeting, zombies never stay dead.

Robert and Sean, of course, Robert Kirkman and Sean Phillips. Robert had this other zombie comic book on the cards as well, which would also go on to become its own TV series…  say does this mean that Mark Millar can also take credit for creating the Walking Dead? If he can, he will. And so, where will we see live-action Marvel Zombies? Spider-Man: No Way Home and Doctor Strange In The Multiverse Of Madness.