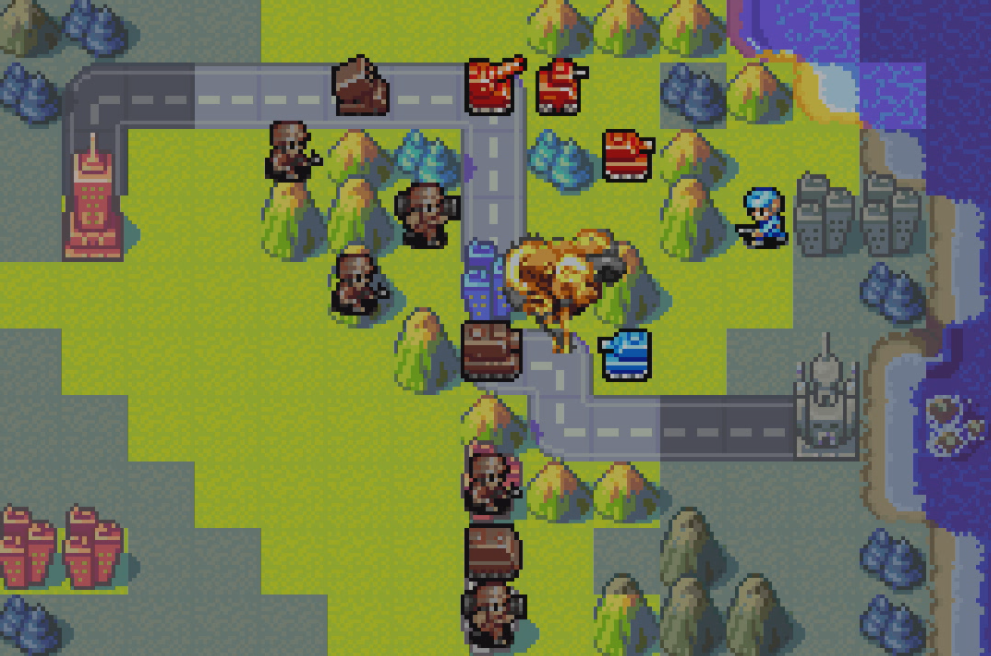 I am a huge fan of turn-based strategy games, and the genesis of my obsession with the genre can be traced back to a particular piece of Nintendo hardware. Back in 2004, my wife and I had been married for just over a year, and as our anniversary approached I was racking my brains as to what to buy her. Step forward the Derby of Gamestation (remember them?) and their second hand display that featured a pair of Nintendo Gameboy Advance SPs. The problem was solved. Well, obviously, I had to have the other one so we could play together, right?

Anyway, a nice shiny new (to us) console is all very well, but what about games? Well, the SP could play any of the Gameboy advance games that were around, so I settled on Pokemon Ruby, Advance Wars and Fire Emblem Sacred Stones. Unknowingly, I had created a monster with the third of those purchases, as the wife has now gone on to own and beat every Fire Emblem game in the history of the free world, and has kept every single title in her own personal museum of gaming greatness. I ended up taking the other games, and boy am I glad I did.

Advance Wars was the game that ended up stealing a lot of my gaming time away, back in those more innocent times where gameplay mattered more than shiny graphics. The premise of the game was simple: you took on the role of the commanding officer (C.O.) of a ragtag bunch of soldiers and had the job of turning them into a fighting force to be feared. Helpfully, Advance Wars was the first game in the series to feature a narrative, and was originally only released in the western markets. Japan didn’t see Advance Wars until a dual release with the second game, Black Hole Rising, which was released in 2003. The story this time was that the nation of Orange Star was attacked by Blue Moon, and then Green Earth and Yellow Comet join in as well. I’m not making these names up, honest! The story was a load of nonsense, to be brutally honest, and while the waters are muddied after an Orange Star C.O. is accused of attacking the other two nations without provocation, it’s all a good excuse for a massive ruck. It’s here, in the combat screens, that Advance Wars shone.

The gameplay on offer was the big draw here. With limited units, you had to take on and defeat all the enemy units on a map, and this was always a lot easier said than done. There’s nothing more nerve wracking than taking on the enemy’s last tank with a weakened squad of bazooka infantry, and the positioning of the troops was also very important. If your little guys were in a forest, or perched on a mountain, they took less damage than if they were going toe-to-toe with the enemy units. The same can be said for capturing the cities that were dotted around the maps: more cities meant not only more income, allowing you to buy new units, but if a damaged unit made it to a city that you occupied, they would be healed a little each turn until they were at full health again.

Each unit, of which there were 18 ranging from little fellas with machine guns all the way up to massive bombers, had different strengths and weaknesses. For example, the aforementioned bazooka guys were strong against enemy armour, but weak against other little men, as they had to use their secondary weapons, a machine gun to fight them. Personally I’d be tempted to fire a massive RPG at anyone shooting at me, but rules are rules, I guess!

My favourite units in the whole game were the rocket launchers that hit enemy units from a long way away, but they weren’t without their difficulties – they could only hit enemy units in a narrow band, and if the enemy closed to within a few squares, they couldn’t be hit at all. Planning an in-depth defence, with tanks in the front line to hold the enemy armour up while the rocket launchers and artillery pounded them to pieces was a good tactic, as was stationing soldiers in the surrounding mountains in case they tried to get sneaky and go around the back. And for goodness sake don’t forget the anti air defences, otherwise it really was game over man!

There was a lot of content to go at with this little Advance Wars cartridge, from tutorials that taught you all you needed to know about the game, to the campaign mode, and even the War Room mode; a score chasing mode where you attempted to win in the fastest time while losing the minimal units. Add in a multiplayer mode using the Link Cable, and this really was an all round great game, which to this day is still sitting at a 92/100 score on Metacritic.

These are my memories of Advance Wars, then. But what about you guys?  Did you play this back in the day, or maybe on the release on the Wii U virtual console? Let us know in the comments! if you haven’t played, go grab it from the Nintendo eShop.

Van Jensen, Erica Schultz, Aneke’s Byline In Blood #1 From Aftershock
Talking Point: How Many Hours Is A ‘Short’ Game For You?
House of Ashes – Bringing the sound of horror to life
Superman: Son of Kal-El #5 Sees Unprecedented Orders
Masahiro Sakurai reveals how Sora came to be in Super Smash Bros Ultimate