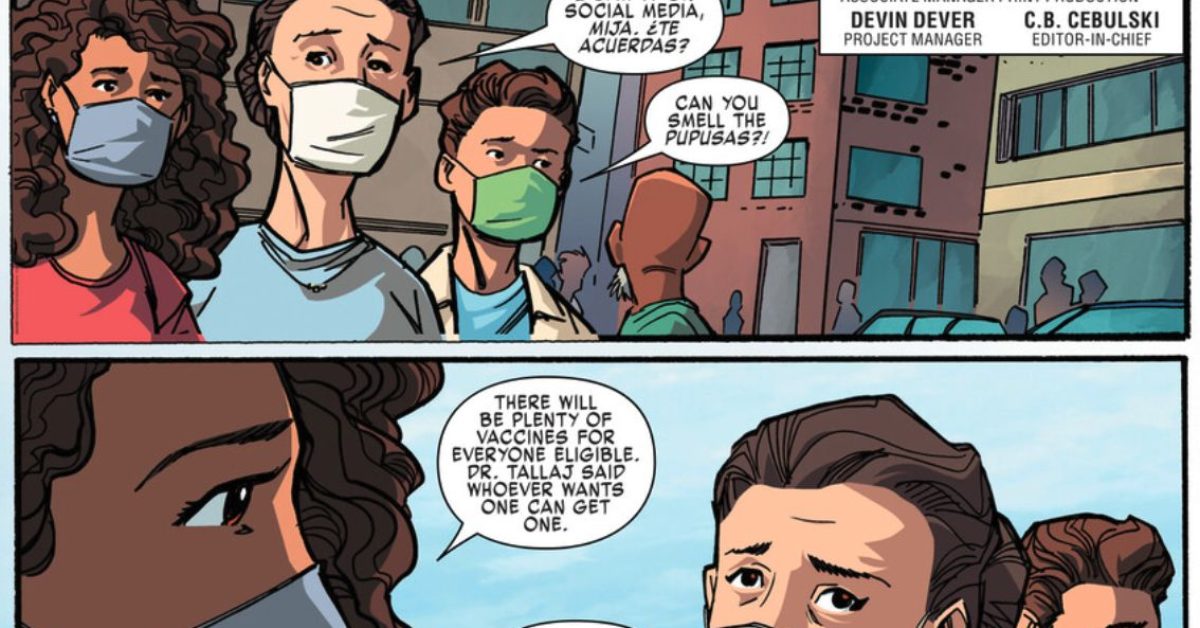 This road to recovery runs through the immigrant communities of color that have been hit hardest by this pandemic and left behind in a vaccine roll-out marked by inequity and misinformation campaigns. Being able to unite Marvel Entertainment with the trusted voices from the community doctors of SOMOS Community Care in a public education campaign designed to drive awareness is a really big deal. This campaign symbolizes where art meets purpose and shows that people nationwide can come together and build community, and look together to the future.

But in a surprising twist, in the comic, which is available at somosvaccinations.com, The Avengers appear but do not actually endorse vaccination one way or the other. Instead, a woman is seen urging her mother to get vaccinated at a mobile clinic despite social media conspiracy theories that her DNA will be stolen.

At this point, AIM, led by MODOK, stage an attack on the streets of New York close to the vaccination center, though seemingly not at the clinic itself. It’s unclear what MODOK’s stance is on vaccination, though it’s worth noting his name is not MODOV, but one would think that, as scientists, AIM would be generally in favor of the idea, and aside from MODOK, they are all at least masked up with CDC-approved face coverings.

The Avengers intervene and take down MODOK and his friends, while at the clinic, the family from the start of the comic receives their COVID vaccinations. It’s worth nothing that at no point do AIM or the Avengers mention COVID or vaccines at all. But afterward, The Avengers do end up grabbing some papusas from the same food truck as the newly-vaxxed family.

“We are all in this together,” says Cap, though the statement might carry more weight if he or any of the other Avengers (aside from Iron Man and Black Panther) were wearing a mask at any time in the comic. It’s unclear why The Avengers even appear in this comic if they aren’t going to explicitly endorse vaccination, or even mention it for that matter. It’s hard to criticize Marvel when they’re ostensibly doing something to promote vaccine awareness… but unfortunately, that something appears to be a weak attempt to have their papusa and eat it too, avoiding showing their iconic characters actually make a statement on vaccines one way or the other while still reaping the positive PR from participating in a public health campaign. It’s like if Cap didn’t actually punch out Hitler on the cover of his first comic, but rather just showed up to eat some schnitzel afterward and spout platitudes.

Here’s what Marvel President Dan Buckley had to say about the comic in the press release:

Marvel has always told stories to entertain, inspire, and reflect the world around us. As many communities continue to grapple with the effects of COVID-19, it was important to us to help promote vaccine awareness and confidence in New York City. We are thrilled to collaborate with SOMOS Community Care for this new comic book and campaign to continue to educate and encourage our communities during these trying times.

Thrilled, but not thrilled enough to have Cap outright say “get a vaccine, son.” Read the comic and learn why vaccines aren’t going to steal your DNA here.