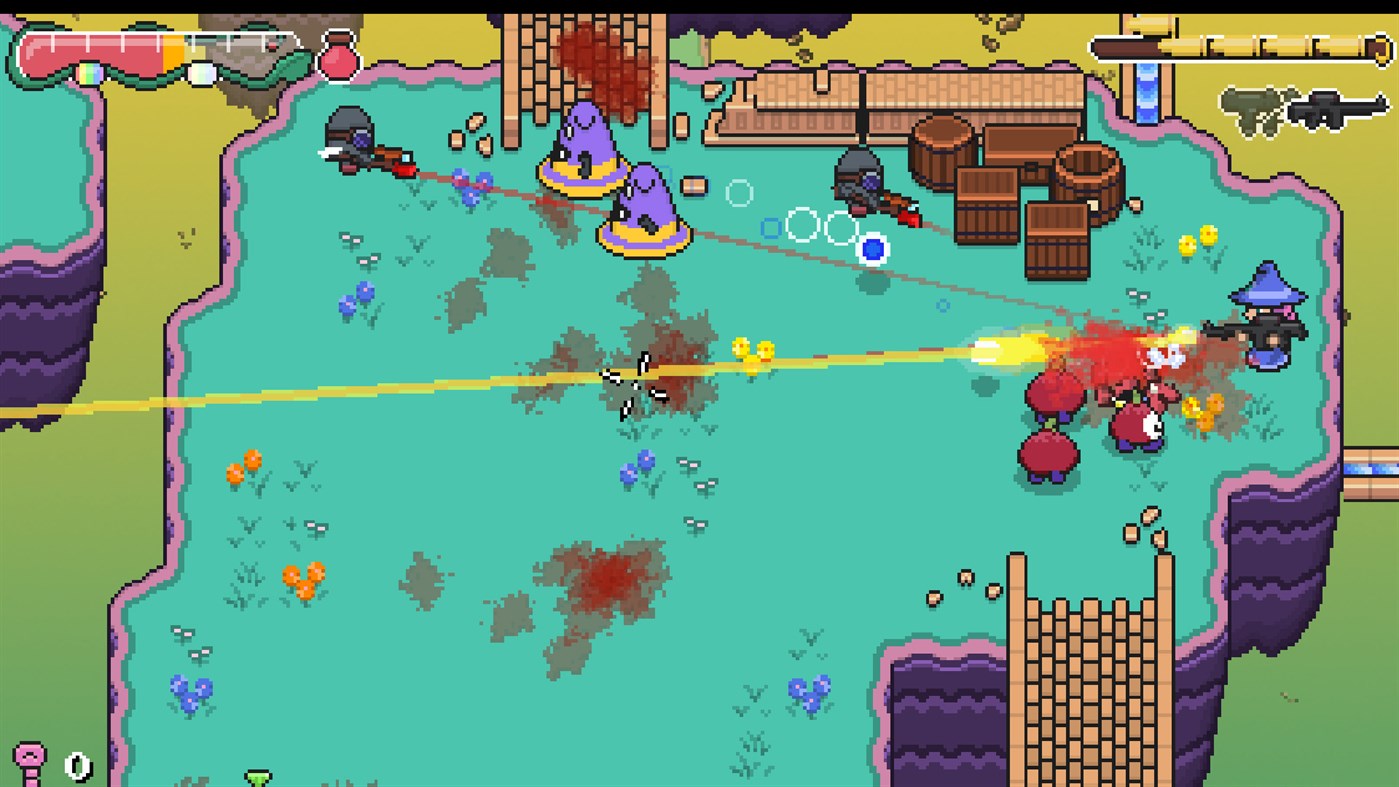 Trigger Witch is a pixel shoot-em-up with a bloody twist, out now on Xbox One, Xbox Series X|S, PS4, PS5 and the Nintendo Switch.

You can grab it on the Nintendo eShop for £13.49, PlayStation Store, or the Xbox Store for £12.49. You can also try out the game with a free playable demo on Xbox consoles.

Players control Colette, a graduate from the school of Witchcraft and Triggery. Magic has all but died in the world, forcing the denizens to turn to the natural evolution of warfare… guns. After a man invades Colette’s world, she wields her newly honed trigger fingers to save the day.

That’s a big difference from the 16-bit shooters that inspire Trigger Witch.

It’s not just fairyland critters you’ll be facing through your playthrough. Giant bosses with unique attack patterns will also stand in your way and provide a healthy challenge.

The game is set in an open-world so you can murder sentient fruits at your own pace. Exploring the world, solving puzzles and conquering foes will net you with gems that can subsequently be used to further expand your arsenal. You can buy new weapons like flamethrowers, SMGs, pistols and so on, and even gain the ability to dual-wield – I’d expect nothing less from a Triggery graduate. Gems can also be used to upgrade your existing weapons.

Speaking of the open-world, Colette’s journey will take you all around the world’s varied biomes: from mining tombs, factories, snowy landscapes and the traditional forest greenery. The best part is you can explore all of Trigger witch’s world with a friend via local co-op. As of now, there’s no word on online multiplayer being available.

On top of environmental puzzles, Trigger Witch also looks like it hides a few surprises up its sleeve with unique mechanics and set pieces. The trailer showcases an on-rails shooting gallery on magical, flying broomsticks.

If you’re in the mood for a classic shoot-em-up adventure with modern refinements and a violent twist, check out Trigger Witch. And if you want to know more, stay tuned for our full review of Trigger Witch on Xbox – it’ll be here very soon.

Magic and firearms make a deadly combo! Recalling the visual style and intuitive gameplay of 16-bit action-adventure classics, Trigger Witch puts an ultra-violent spin on cute and colorful pixel art. With a compelling and original narrative, puzzling environments to explore, a dynamic soundtrack, twin-stick shooter mechanics and a vast array of enemies to blast into smithereens, this is a tale that will grip you from start to bloody finish. From the creators of Reverie, Trigger Witch is a stylized 2D twin-stick action game set in an odd open world where magic is outdated and firearms are the new way of life. Players assume the role of Colette, a prospective graduate from the Stock, an academy for Witchcraft and Triggery. After a mysterious man invades her realm, events are set in motion that turn Colette’s life upside-down, casting her as the sole heroine with enough firepower to restore peace.

Old Man Logan Returns To His Future Past in Wastelanders
Platinum Games has interest in bringing Star Fox Zero to Switch, but it’s up to Nintendo
I Am Fish Review
Sherlock Holmes Chapter One Release Date Leaked, PS4 Versions Delayed
Mineski Globals raises $10.6m in Series A founding round