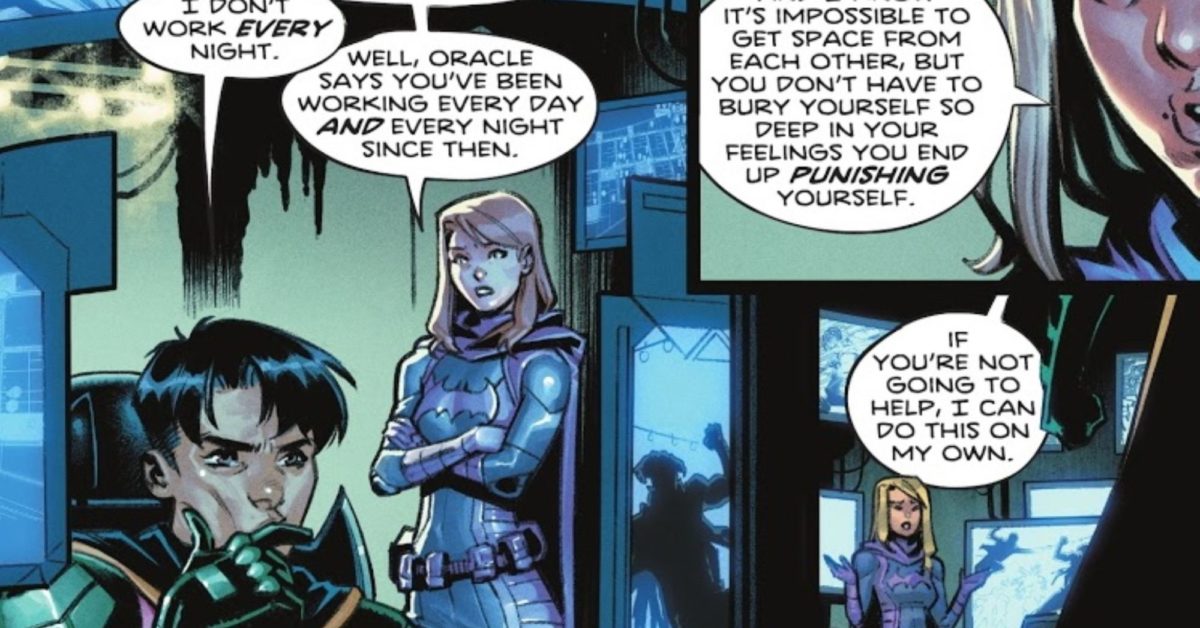 In last month’s Batman: Urban Legends #4, Tim Drake – Robin – was featured in the strip “The Sum Of Its Parts” by Meghan Fitzmartin, Belen Ortega, and Alejandro Sanchez. With Tim Drake looking at his future plans, reassessing his life, with Barbara Gordon telling him that “what you find is going to change you.” In the trade, we call that foreshadowing.

He was meeting an old friend of his, Bernard, who last appeared many, many moons ago.

Though first, he had to negotiate members of his own Batfamily.

Before ignoring the current threat to Gotham of the Chaos Monsters and going to meet his old friend at a restaurant.

There was some excitable comment on social media, but it seemed pretty much innocent, even with trousers that tight. Just two old friends meeting up again after years.

“He still looks… he still looks…” Tim and Bernard meet up, share a hug, they chat… but those ellipses hang in the air.

Yes, Bernard, what do you want with Tim?  Of course at that moment, Bernard gets kidnapped by the bad guy that Drake could have been dealing with but wasn’t. With great power, there must come, etc etc.

But in Batman: Urban Legends #5 out last week, there’s a little less subtextual and a more obvious take over what was going on. With a little guilt from the Batfamily – and his ex=girlfriend – about his sense of duty. With Spoiler emphasising their former relationship.

We also get more background. That Bernard’s parents never liked Tim Drake, and wanted a “perfect” life for their son – and Bernard didn’t match up.

With Tim calling Conner Kent, and describing Bernard as “a… friend”, heavy on the ellipsis again.

More uses of ellipses… when talking about Bernard. This time emphasising the importance of Bernard over the others who had been taken.

Throwing in some self-doubt and insecurity for Tim Drake into the bargain.

The final part of the story is published next month. Will they keep the teasing going? Or will they follow through in the direction they have so heavily hinted at? Will Tim Drake be portrayed as a bisexual young man? Might Bernard be part of that aspect going more public? And what will Stephanie Brown say about this all? Batman: Urban Legends #6 will be published on the 10th of August, just before Free Comic Book Day on the 14th.  Might the likely headlines help?

BATMAN URBAN LEGENDS #4
written by CHIP ZDARSKY, MATTHEW ROSENBERG, MEGHAN FITZMARTIN, AND CAMRUS JOHNSON art by EDDY BARROWS, RYAN BENJAMIN, MARCUS TO, AND BELÉN ORTEGA The penultimate chapter of the Grifter story is here! Grifter’s walking a deadly line between Lucius Fox and HALO’S plan…can he survive the endgame? Oh, and yeah, now Superman is after him! As old wounds threaten to sabotage Batman and Red Hood’s investigation into the Cheerdrop drug turning Gotham City upside down, they run afoul of Gotham’s coldest criminal, MR. FREEZE! And the force behind the Cheerdrops will be banking on the former Dynamic Duo’s demise… TIM DRAKE has returned to the streets of Gotham City and is seeking a new purpose, but what he finds is a string of young adult kidnappings committed by someone known only as “the Chaos Monster.” Will Tim be able to get to the root of the kidnappings, or will he fall prey to them? Critically acclaimed Future State Robin Eternal writer Meghan Fitzmartin returns to tell this Tim Drake story with rising star artist Belén Ortega. Acclaimed creator and actor Camrus Johnson writes an action-packed story featuring Luke Fox—the character he portrays on The CW’s hit television series Batwoman! Retail: $7.99 In-Store Date: 6/8/2021

BATMAN URBAN LEGENDS #5
Story by CHIP ZDARSKY, MATTHEW ROSENBERG, MEGHAN FITZMARTIN, AND MARGUERITE BENNETT art by EDDY BARROWS, MARCUS TO, RYAN BENJAMIN, BELÉN ORTEGA, AND SWEENEY BOO Red Hood: Meet Cheer, the villain behind the insidious Cheerdrops altering the citizens of Gotham. When confronted with a man responsible for taking the lives of so many, including Tyler, the kid Jason Todd swore to protect, will Red Hood be able to stop himself from taking vengeance for a whole city? Grifter: Through four chapters of blood, bullets, and Batman, the true reason for Cole Cash emerging in Gotham City reveals itself at last…but it’s not what you think! Tim Drake: Tim is determined to find his friend Bernard, who was taken by a Chaos Monster before his very eyes. But this case is different from any Tim has taken on before, and the cracks are starting to show. Batgirls: Cassandra Cain and Stephanie Brown are just two teenagers breaking into Wayne Manor so they can play some video games. But when Oracle gives them a mission, the Batgirls suit up and head to an abandoned arcade to investigate.
Retail: $7.99 In-Store Date: 7/13/2021

BATMAN URBAN LEGENDS #6 CVR A NICOLA SCOTT
(W) Various (A) Various (CA) Nicola Scott
story by CHIP ZDARSKY, JOSHUA WILLIAMSON, MEGHAN FITZMARTIN, AND MATTHEW ROSENBERG art by EDDY BARROWS, MARCUS TO TREVOR HAIRSINE, BELÉN ORTEGA, AND CHRIS SPROUSE Red Hood: The epic Cheer story line reaches its conclusion, and Red Hood’s alliance with Batman will be forever changed. Will the former Dynamic Duo get the Cheerdrop drug off the streets for good? Or will they forever be at the mercy of the villain who created it? And will Red Hood find a new home for Tyler, the boy he’s sworn to protect? Tim Drake: Tim Drake is in the den of the Chaos Monsters with the other kidnapped teenagers of Gotham City. In order to free himself and the other teens, Tim will have to embrace help from his friend Bernard and hear something about himself he never knew. A brand-new chapter of Tim Drake’s life starts here, and you won’t want to miss it! Black Canary: Oracle locates some Batman weaponry, missing since The Joker War, and calls in her old friend Dinah Lance to help retrieve it! Fists will fly, the Canary will scream, and a stunning new mission begins. The ending will leave readers in shock and awe! Zealot: The HALO Corporation sent their top field agent, code name Zealot, to hunt Maxwell Lord. But the villain has a guardian angel in the form of…Wonder Woman?! A throw down for the ages will ensue! Retail: $7.99 In-Store Date: 8/10/2021