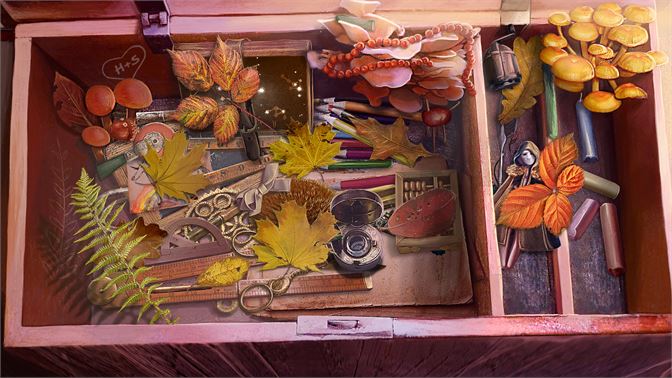 Is it time for another Artifex Mundi hidden object release already? This month’s entry is the third in the Lost Grimoires series, a brand that is most notable for focusing on alchemy, as you gather ingredients to make potions that can reverse time, freeze enemies, and other fantastical shenanigans. It also means Lost Grimoires 3: The Forgotten Well takes a dive into the fantasy genre, with golems, elves, ent-like creatures and magical staves out the wazoo.

If you’ve played a hidden object game, you know what you’re getting here. You are dumped into attractive, hand-painted 2D scenes, where you hover your cursor over things of interest. There are items to pick up and put in your inventory, similar to graphic adventure games, and those items can be used on the environment or on other items. There are minigames that play out like easier, more friendly Professor Layton puzzles, and there’s the hidden object puzzles, which show you an explosion of items before handing you a shopping list of things to find. There’s no change to the formula here, because – let’s be honest – Artifex Mundi only change things up in the tiniest of increments.

The story feels like it might go in interesting new directions, but then snaps back to a template. You play as ‘the Alchemist’, the sister to King Raphael. He’s run off, waging war in a far corner of the kingdom, against a magical elf called Sylvanheir who commands an army of tree-beasts called the Twisted Ones. While he’s away, you’re holding the fort, which of course means that a clutch of Twisted Ones invade and you’ve got to scrabble around to mount a defense. These opening moments feel exciting: the idea of a hidden object game where you’re besieged by giant stickmen is new and gets some enthusiastic thumbs up. There are Attack on Titan and Minas Tirith vibes as you activate some sleeping sentinels to try to protect you and the city.

We’re getting close to having completed every Xbox hidden object game (ranked list incoming, no doubt), so it’s heartening to experience the different flavour of narrative. But Lost Grimoires 3: The Forgotten Well can’t stay in that space for long, and soon falls into its classic pattern of chasing a magical wizard or being chased by one. When you were in the city, you were also effectively its ruler, which was new, but when you’re on the lam, that’s not important anymore.

The story turns out to be a hokey one, with a twist that’s hilariously telegraphed. Even Clark Kent and his spectacles are a better alias/disguise than the one you see in Lost Grimoires 3. As a story, it’s also melodramatic, stuffed to the brim with noble sacrifices and emotional goodbyes, and we’d argue that it sits toward the lower end of Artifex narratives.

The puzzling also sits towards the lower end, but we will fully admit that this is a taste-driven statement. The balance here is roughly 60% on item interaction puzzles and 20% each on hidden objects and minigames, which is a significant shift from the Artifex norm. The thing is, we love hidden object puzzling, and the lack of them was a miss. For us, it’s hidden object puzzles that differentiate these games from others (such as graphic adventures), so it’s a shame to see them thin on the ground.

Lost Grimoires 3 also does what it can to keep from sprawling. You’ll have a maximum of four areas to explore at any time when you’d normally have several, and – personal taste again – this throttles the enjoyment. Sure, it means you’re less likely to get stuck, as there are fewer items and fewer places to use them, but it makes everything dirt simple. This is doubled-down on by Lost Grimoire’s unique element: the alchemy. Every so often, you’ll get an item that’s used in an alchemical spell, and it’s given a helpful icon to show it’s used in that way. But that means half your inventory is ring-fenced for a future spell, which means they’re not useful right now. The library of items that can be used to solve a puzzle is summarily halved, and it makes things too simple.

The puzzles that are here are perfectly fine, though, and we got to the end on Expert without a hint, which is usually a good sign that no puzzle was obstructive. On a per-puzzle basis, we never thought they were too easy either (although the caveat from the previous paragraph still applies). If we were to gripe, there’s a habit of introducing items that are too similar to each other, particularly in the last third, which causes frustrations: you get a sickle, gardening gloves and pruning shears when you need to gather some plants, but only one of these works at any time, when – let’s be honest – any one of them would be fine. It can feel arbitrary.

We’ve complained about the alchemy for making things easier, but it also spices things up. You’re handed spells, and those spells need ingredients, which are tucked into hidden object tableaus and the crannies of the game environment. Once you’ve got all the ingredients, you hop into a match-3 puzzle, which isn’t how we expected spells to work. Gandalf must love a bit of Candy Crush. But it’s a welcome change of pace, as you’re collecting enough of each gem colour before a move counter runs down. They are never, ever difficult, and you’ll be completing each one with moves to spare, but it helped to give Lost Grimoires 3 its own identity. Plus they’re fine and fun.

On the whole, Lost Grimoires 3: The Forgotten Well is not a bad game, or even a bad hidden objecter. It’s serviceable, with some lovely artwork, intuitive puzzles and barely a difficult moment. It passes by in a smooth three hours, and – if you’re a serial purchaser of hidden object games – then this won’t disappoint.

What’s missing, though, is any sense of ambition. Lost Grimoires 3 is extremely safe, keeping you on a short leash as you explore, giving you few items and fewer places to use them. And while it starts from a new place, giving you the rule of a city and chucking you into a siege, it backtracks quickly to its traditional formula of running after magical beings and their MacGuffins. There are signposts to an interesting future for Artifex Mundi hidden object games, but Lost Grimoires 3: The Forgotten Well neglects taking any of those potential paths. What you’re left with is a slightly below-par hidden object game, and – if you’re reading this review – you will likely know whether that’s enough to chuck down £12.49.

You can buy Lost Grimoires 3: The Forgotten Well for £12.49 from the Xbox Store for Xbox One and Xbox Series X|S