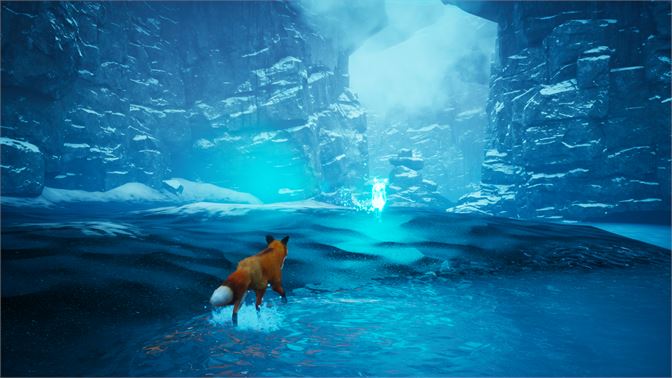 My back garden is now an unofficial fox fight club. They come from all over London town, rocking up around 3am and fighting it out until dawn. It’s such a draw for the local cubs that I wouldn’t be surprised to see a bunch of fox posters dotted around town, advertising the event. With that background I was nervous when I learned that I would be playing the part of a fox in Spirit of the North: Enhanced Edition; ready for a Street Fighter-type of game. Thankfully I was wrong and this is a spiritual journey adventure game in which we get the opportunity to step into the little foxes’ paws and play.

Spirit of the North finally has come to Xbox in an Enhanced Edition, giving us Xbox players the chance to take it in via the finest version possible. The game follows the life of an ordinary red fox, with no words or voice-over to tell the story. Instead it is entirely told through the visuals. Due to this Spirit of the North will get compared to the likes of Journey; although that’s not a bad game to be held against. When you do fall into what it is able to deliver though, you’ll discover that Spirit of the North has been inspired by the breathtaking scenery of Iceland, influenced by Nordic folklore and mythology.

In Spirit of the North: Enhanced Edition, your fox spots a mysterious red smoke trail coming from a mountain on the other side of the world, setting off to discover what it all means. Your journey is intertwined with a female spirit fox who acts as a guide… and at times your savior. As you journey onwards, you discover ruins of forgotten civilisations, skeletons of men, and ancient monuments that need to be explored as you move through. The story takes you within the real world and into that of the spirit land as well, and it’s this which is the best part of the game, ensuring that Spirit of the North is a very strong addition to the visual storytelling genre. I won’t go into details for sake of spoilers, but it’s safe to say that I loved this tale and the way it is told; at times it has real heart and is extremely beautiful in moments.

Gameplay-wise it’s all played in the third person with you controlling the fox around the amazing world. You start with the ability to jump, and are capable of sliding down ice slides or rivers. When the game progresses you gain skills that align you with the spirit fox. For example you find these white spirit flowers dotted around the world and if you go near them and bark, you get the power of the spirit fox. With this, you can open gateways, jumping and speeding across the air in bursts. There are times when you’ll need to sleep too, utilising the spirit fox as she travels out of your body to get into hard-to-reach places. This is all very clever and works brilliantly.

What I haven’t personally enjoyed quite so much are the platforming elements of the game. The fox doesn’t always feel weighty enough and the platforming feels slightly off. Some of the animations – mostly of jumping and falling through the air – feel janky and not quite on point. At times, Spirit of the North has left me frustrated, needing to put it down before coming back at a later time.

There’s a nice chunk of gametime found in Spirit of the North, with around 4 to 6 hours of it depending on if you go around and hunt down all the secrets. You can, if you like, awaken the souls of all those you find dotted around the map too, with these placed in hard-to-reach areas. There are a few moments which seem a bit too drawn out though and I could have done with less wandering and more set pieces. But overall the journey is lovely and calming.

Visually there is an enchanting aesthetic about Spirit of the North: Enhanced Edition. Its use of the Icelandic landscapes, skies, and rolling hills ensures that it is a pleasure to wander around. There is a section in the latter moments which focuses on the spirit world, letting you roam around in a heavenly place amongst the ruins of an ancient culture. It’s particularly fondly remembered.

It’s not all perfect though and even though the animations are slightly off, and a few glitchy moments occur, on the whole the charm of it still wins through. It’s also worth mentioning that the soundtrack is brilliantly composed with some excellent reflective scores and haunting melodies that work perfectly within the game.

The journey, atmosphere, and concept of Spirit of the North: Enhanced Edition are all fantastic, as is the setting and the visuals. It’s a shame that the platforming elements are at times frustrating in regards the accuracy and weight of the fox, and some of the animations don’t work as planned, but this is still a very unique and endearing experience.

It’s certainly a lot more pleasant than the fox fight club in my back garden.

Be one with Spirit of the North: Enhanced Edition on Xbox Series X|S and Xbox One today!