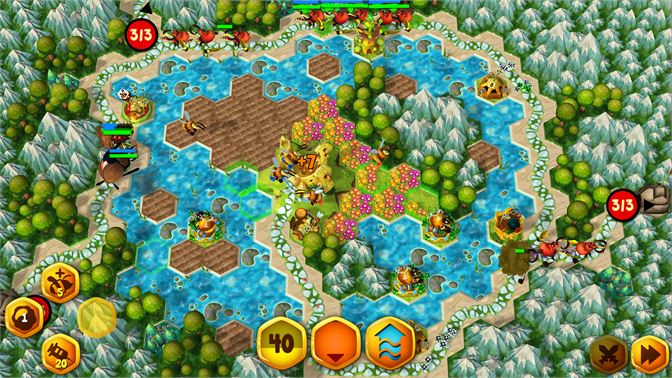 Bees and tower defense are a match made in heaven. You’ve got the hive and queen to be defended, and – if Winnie the Pooh has taught us anything – honey is going to attract a lot of attention. You have drones to protect the hive, while pollen can be gathered from the surroundings as a resource. But most of all, bees mean honeycombs, and BeeFense BeeMastered cuts the game board up into honeycomb-like hexagons, which ties the theme up in a nice little bow.

It’s clearly a concept that’s worked for ByteRockers’ Games, as their 2017 PC release has got a terribly named 2021 ‘BeeMaster’ for console. Normally, a port of a PC strategy game sets off alarm bells: you can rarely translate mouse and keyboard to a game controller. But in the case of BeeFense, it’s a snug fit. BeeFense is a simple tower defense game (although simple doesn’t necessarily mean easy), and the movement to console suits BeeFense just fine.

You play as a faction of bees, under the nervous rule of the Queen Bee. You mostly want to survive and flourish, but a deranged hornet queen called Queen Hornetta keeps sending wave after wave of fleas, hornets, moths and even zombees at you. You’re always on the back foot, moving from region to region just ahead of Hornetta. Luckily, you begin to gather an entourage of helpful allies, including a bandana’d Rambee and a black ninja wasp. Rumbling in the background is an ecological message that’s more than you’d expect from a tower defense game, but still gossamer thin.

There are 26 levels here, unlocked linearly, and you mostly start with your base, a single bee, and a map of hexagons. Some of these hexes will be resources, with the primary ones being pollen, which generates the currency for buying and upgrading towers, and nectar, effectively a slush fund that the towers use to stay powerful. There are a couple of other tiles, including water (used to temporarily power-up your turrets) and trees which offer berries (finite, a kind of ‘research’ currency), but your first job will be to spot the gates that represent the entry-points for your enemy. They have connecting paths that wend to your hive, sometimes splitting or converging, and you’ll need to choose the placement of your towers well if you want to make the most of your limited pollen.

The towers are relatively conventional, and you can probably spot the equivalents from other games. You have Cherry Guns, which are machine gun turrets that can be switched into a DPS mode or a slowing-down ‘hot wax’ mode. You also gain access to Bumblebee Bombers, which are long-range artillery, and can be upgraded into mortars or railguns. The absolute MVP is a Chestnut Shelter, a pillbox full of mines, and we raced to get one of those bad boys directly in front of our hive as soon as we could.

Enemies are varied, but not in a way that’ll surprise you. You get the big, slow bullet sponges, like the Hornet Fighters; the swarms of one-hittable Fleas; and speedy Honey Thieves that will bypass your defences unless you slow them down a tad. Moths abandon the paths completely and worms dive beneath the soil, and both – if we’re being honest – are a pain in the arse. BeeFense BeeMastered never feels like it gives you adequate tools to deal with either of them, so you’re commonly throwing the sink at them and hoping.

BeeFense BeeMastered has a chunky progression system between the battling, with towers to buy and upgrade. There are also perks to unlock, like faster bees and a better starting level for each placed turret, and some consumable weapons like dung balls that can be triggered from the d-pad, acting like Raiders of the Lost Ark-style boulders. BeeFense is a substantial package for the money, even if the 26 levels seem initially low, as there’s plenty to grind for, including secondary objectives. Levels average out at about twelve minutes of play each, so you’re not just getting a quick buzz for your £6.69. This is a reasonably long game.

BeeFense BeeMastered has so much going for it that it becomes hard to pinpoint why it feels unsatisfying. It’s simple, but not reductively so: you’ve got plenty of strategies available to you, and levels get difficult pretty quickly. The art style won’t be for everyone, as it’s on the garish side, but it’s got character and colour. So why were we fine leaving BeeFense BeeMastered behind?

A lot of it comes down to how much manual labour there is. BeeFense BeeMastered makes the bold decision to make your worker bees and your soldier bees one and the same. Building a turret means nothing if they’re not manned (bee’d?), so you have to forcibly allocate a bee to them. That bee could be gathering you resources, so you have to make a call on which is more important at any given moment.

The problem is that this scales terribly. When you’ve got twenty turrets out, you don’t want to be manually shuffling bees between twenty of them before every wave. You could leave the bees in the turrets, but then they’re neglecting their resource duties, and you’ll need plenty of nectar and water for your twenty turrets to work optimally. So, you’re spending your time toing and froing between your turrets. The tools you’re given aren’t enough to handle it. You can press RB to skip to the next closest bee, but the next closest bee is often in a neighbouring turret. Often bees run out of their resource and sit there without making a fuss, wasting your precious time. It’s all a bit of a hassle.

Then there’s the grind. Some levels are pretty much impossible without significant upgrades (auto-levelling turrets takes a lot to unlock), so you’re rinsing earlier levels to get the required resources. We sat on level 20 for roughly three hours, repeating berry-rich levels to get enough for a significant perk.

Unlock a new level, and BeeFense BeeMastered has the cruel habit of throwing you a curveball which might need a completely different strategy. This is most common with the zombees. Just under half of the levels contain zombees, but only one turret can damage them. That turret, however, isn’t particularly useful for other mobs, so you’re in this weird limbo: do you build a shoddy but expensive turret that might have zero effect, or do you risk an invasion of unkillable zombees with no protection? This pattern continues with moths and earthworms, as you need specific protections in place, and you won’t know you need them till they’re overwhelming your hive. You can press a button to see an upcoming wave, but you can’t see beyond to a future wave. After the tenth level or so, we never finished on our first try, and had to restart once we understood what was coming.

The problem is that these weird design infuriations don’t pay off by delivering something that is new or interesting. There’s a ‘bee-n here, bought the t-shirt’ feel to BeeFense BeeMastered, and while the traditional tower defense-ing is done well and competently, outside of the quibbles we mentioned, there’s very little that makes you take notice, and you will be borrowing strategies from other tower defense games to succeed. When the pinnacle of strategy is to poison things early, slow them down, and dump mines down as a safety net, you will feel like you’ve been here before in a more plant and zombie-themed classic.

BeeFense BeeMastered is a sturdy, simple tower defense that manages to offer tense moments. But that sturdiness is unremarkable, and you can get by with tower defense strategies from any number of other games. If it was more remarkable, more fun to play, then its biggest flaw – a boring back-and-forthing between the turrets – wouldn’t have stung so much. Instead, too much of BeeFense BeeMastered feels like work. We were well up for feeling like the Queen Bee, rather than the worker drone.

You can buy BeeFense BeeMastered for £6.69 from the Xbox Store for Xbox One and Xbox Series X|S