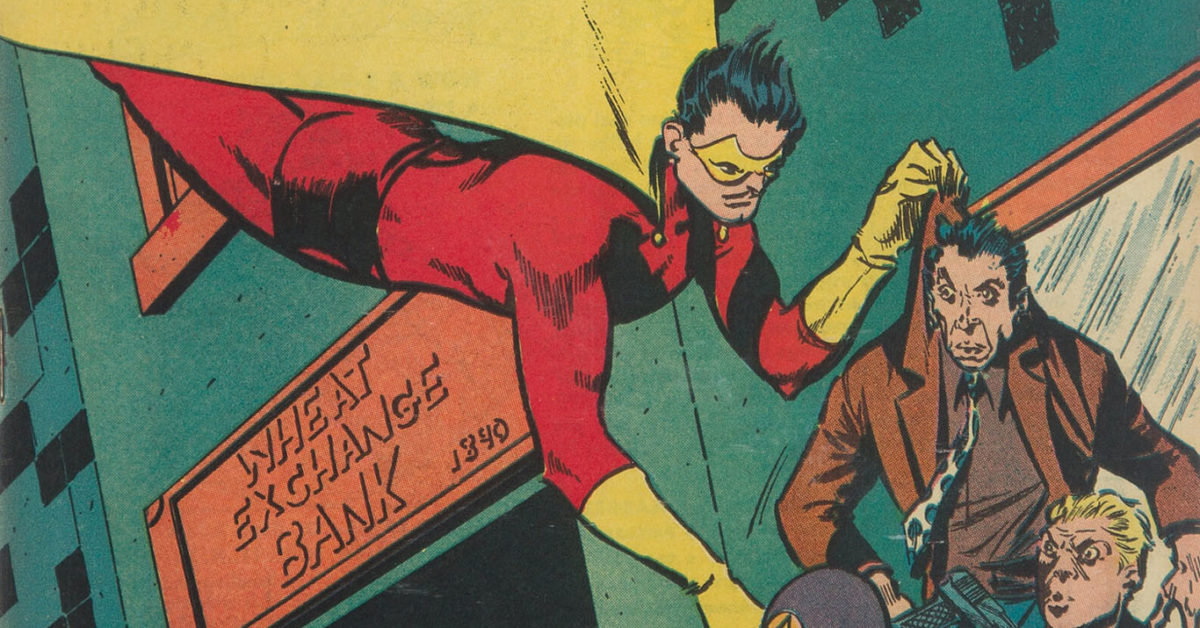 Captain Wizard Comics #1, published by Croydon Publishing Co in 1946, might just be the strangest Golden Age comic book that I’ve ever read —  and I’ve read a lot of them.  I can barely imagine what comic readers of 1946 must have thought of the bizarre cover-featured story drawn by artist Jack Alderman in this issue, but the opening scene which shows that the weather is raining literal cats and dogs only reveals the smallest hint about how weird this is going to get. There’s a copy of this uniquely strange Golden Age Comic book, Captain Wizard Comics #1 (1946) CGC FN+ 6.5 Cream to off-white pages in this week’s 2021 July 11-12 Sunday & Monday Comic Books Select Auction #122128 from Heritage Auctions.

Dialog from early on in the story reveals what this strange Captain Wizard tale is about:

Oh, yes! Indeed! This phenomena has been observed before! Charles Fort collected data on rains of red dust tadpoles… that was back in 1890!

Well, we’re going to try and verify a theory of Charles Fort’s — he thought there was a land up above the clouds!

Charles Fort was a writer and researcher who specialized in collecting reports of unusual phenomena and events which seem to challenge the boundaries of accepted scientific knowledge.  He developed a dedicated following which continues to this day. In recent times, he’s been described as “essentially a satirist hugely skeptical of human beings’—especially scientists’—claims to ultimate knowledge” and at the other end of that spectrum “a patron saint of cranks.”  Regardless, he’s been a hugely influential figure for both fantastic fiction writers and those interested in the fantastic over the past century.

A later reference to “Newland” in the story points towards one of the influences on this Captain Wizard tale — Fort’s 1923 book New Lands.  Hoping to find why it’s raining cats, dogs and frogs (they suspect that “Fascists were behind the frog rain”), Captain Wizard and associates commandeer a plane and fly it fifty miles into the air.  They find that our world is layered with another land, “Cloud Land” which is high above the earth.  Interestingly, this “Cloud Land” is noted as the explanation for an actual scientific phenomenon called The Heaviside Layer — an ionized reflective layer in the atmosphere that reflects radio signals back to Earth.  The term was also used in the 2019 film version of Cats — which, come to think of it, is an interesting connection to Captain Wizard’s “raining cats and dogs” phenomenon.

Cloud Land contains alternate versions of people who live on Earth, including a Cloud Land Hitler who is merely a painter.  There is another power-mad dictator on Cloud Land, however, which proves that there was indeed a connection between Fascism and raining cats, dogs and frogs — just not the connection they thought.  An astoundingly weird product of its time in history, there’s a copy of this uniquely strange Golden Age Comic book, Captain Wizard Comics #1 (1946) CGC FN+ 6.5 Cream to off-white pages in this week’s 2021 July 11-12 Sunday & Monday Comic Books Select Auction #122128 from Heritage Auctions.  Even if you don’t bid on this one… you should read Captain Wizard Comics #1.

View the certification for CGC Certification ID 149694003 and purchase grader’s notes if available.