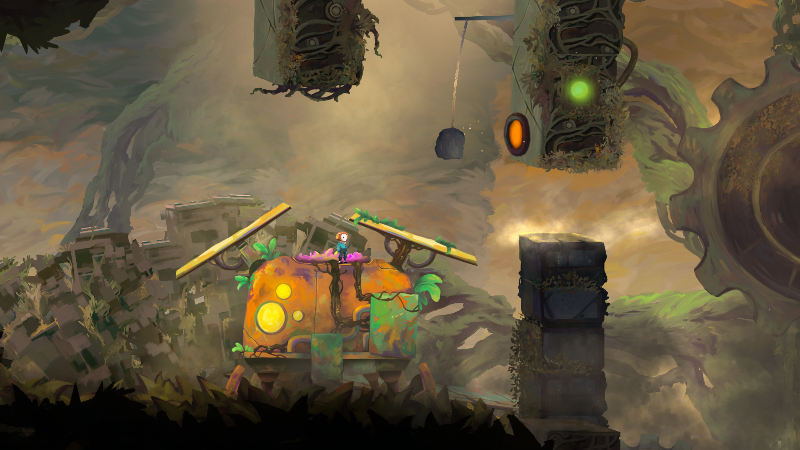 Developed by Nerd Monkeys and published by Hatinh Interactive, Out of Line is an adventure platformer with a heavy emphasis on puzzle-solving. With no dialogue or text boxes, the narrative of the game is told through details in the background and the actions of the characters. Which makes sense, given that the most eye-catching aspect of Out of Line is the art style – the entire game is in a hand-drawn 2D style; this includes the characters, animations, and backgrounds.

Out of Line starts with the character San, an interesting looking fellow who spends the first level escaping from a factory full of sinister claw hands. Throughout his escape he is aided by mysterious floating cubes that look to be the true target of the claws that are invading the factory.

The gameplay focuses on puzzle-solving with some lighter platforming elements mixed in. San isn’t the most acrobatic guy, but he gets around well enough. Mainly in part to a spear that he is able to throw and recall at will. The spear is the defining aspect of all of the gameplay as when San throws the spear it sticks to whatever surface it strikes. This allows him to scale walls that would otherwise be too large to climb.

It can also be used to interact with other parts of the environment. As a few examples, there are buttons scattered throughout the levels that will open doors or move platforms. By throwing his spear at them, the buttons will activate and allow San to pass through. There are also more creative uses for the spear as many of the contraptions throughout the world are controlled with gears. By throwing his spear into the gears, San will cause them to stop working. On the other hand, there are consoles present that the spear can be shoved into so San can work his spear like a lever.

San’s spear is an integral component to solving puzzles throughout the world and is the cornerstone of what sets the gameplay of Out of Line apart from other puzzle platformers.

San isn’t the only character in the Out of Line world though. Throughout the first level, there are a ton of characters identical to San that are also fleeing from the claw monsters that are trying to take the aforementioned mystical cubes.

These characters have spears of their own that they use to try and escape, but San’s is distinct with its glowing yellow design. San never directly interacts with these other identical characters, however they do assist each other by helping clear the way for each other during their escape. This ranges from stepping on buttons that move platforms for each other to throwing spears to hit buttons or provide platforms for climbing.

These kinds of actions recur throughout the game, with other characters being introduced as the game progresses. These new characters do interact with San more and in turn San will help them as he is able.

The difficulty curve is fairly standard for that of a puzzle platformer. The game starts off very basic and slowly introduces the different concepts that build out the foundations for all of the puzzles.

In terms of atmosphere and it is that which is typically what people remember the most when they play these kinds of games. As stated earlier, the most eye-catching aspect of Out of Line is its art design. It’s not a brand new prospect, but hand-drawn games have the advantage of using a more stylized design that becomes more timeless. Along with that, sound design and narrative will be shaping forces in how memorable of an experience Out of Line is, especially since it is a game with no explicit narration.

My first impressions of Out of Line via Steam have all been positive so far. The puzzles do take a little while to become difficult, but by the end of my first hour playing the game, things seemed to be ramping up to a proper puzzle-platformer difficulty. It will help keep the game more accessible for players, which is nice.

Another note on the difficulty is that there are optional puzzles to complete which unlock further strange cubes. I’m not sure if these cubes are going to be purely tied to achievements or if they will affect the outcome of the plot, but they do reward curious players and I always like it when a game is able to provide something for those intent on randomly exploring corners of the game. Because I’ll be damned if I ever stop searching down random pathways for secrets and mid-tier loot.

Even if the cubes aren’t directly tied to the plot – which I would be surprised by if they weren’t – there is always the possibility that clues to the plot are hidden in these other areas. But the only way to find out is to play through the rest of the game on Xbox later this year.

Huge thanks go out to those at Nerd Monkeys and Hatinh Interactive for providing us access to Out Of Line on PC. You’ll find the game currently available on PC through Steam and on Nintendo Switch, whilst an Xbox One and PS4 drop is scheduled for later this year. We’ll be back with a full review once that Xbox launch hits home.