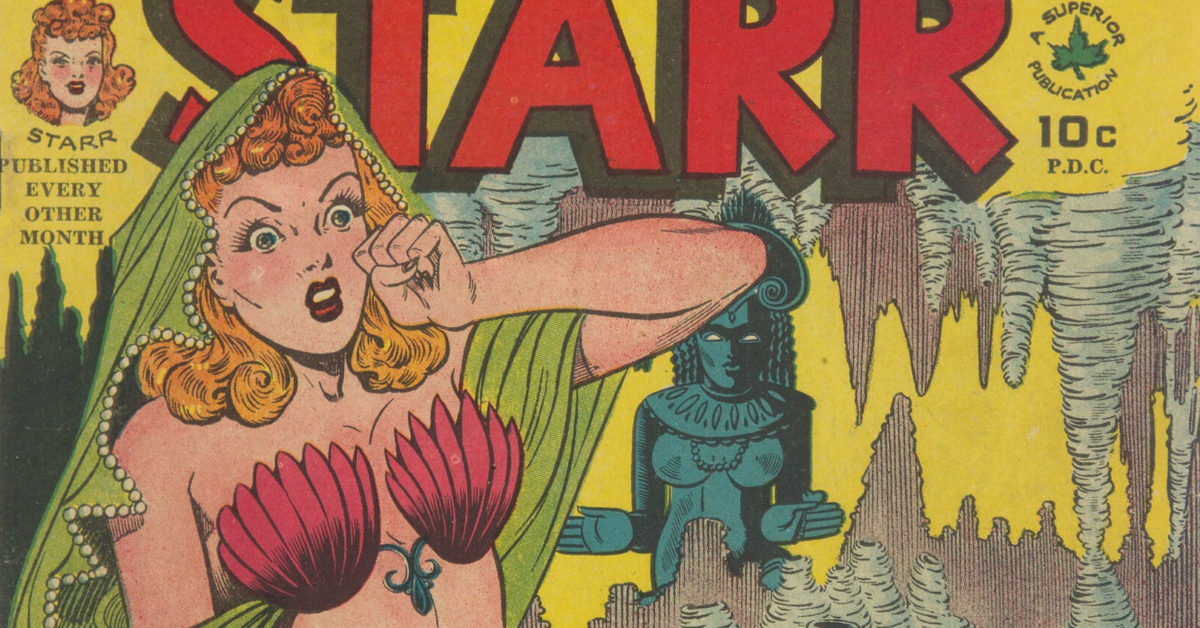 “I used to get fan letters from guys who requested a ‘daring picture’ of Brenda,” said Brenda Starr creator Dale Messick in 1995. “Well, you know what they wanted–I had made Brenda very sexy. I’d send them a little sketch of Brenda Starr going over Niagara falls in a barrel and say, ‘I hope this is daring enough.'” Audacious and daring reporter character Brenda Starr got her name from 1930s socialite Brenda Frazier and her persona, fashion sense, and looks from Hollywood actress Rita Hayworth.  A character whose rise mirrored the shifting roles of women in the workforce and the culture at large during WWII and beyond, Brenda Starr attained popularity across comic strips, comic books, film, and merchandise. There are several issues of the Brenda Starr comic book from Superior Comics including Brenda Starr V2#3, V2#6 and V2#6 in this week’s 2021 July 11-12 Sunday & Monday Comic Books Select Auction #122128 from Heritage Auctions.

Messick had changed her name from Dalia to Dale to avoid submission editors’ prejudices against female cartoonists, and used Brenda to push such boundaries for women in journalism:

While many praised Messick’s work as pioneering, others criticized “Brenda Starr, Reporter” for its unrealistic portrayal of the journalism profession, since most female reporters were delegated to covering social events or city council meetings. But many of her female readers, especially little girls, looked forward to reading the comic strip to see a woman do things that during the early part of the 20th century were typically assigned to men. The Los Angeles Times’ Claudia Luther wrote that CNN anchor Charlayne Hunter-Gault said in an interview that she “wanted nothing more than for her life to have the ‘mystery and romance’ she associated with Brenda’s big-time, big-city journalism.”

Although the character debuted as the star of her own comic strip in 1940, it’s noteworthy that Brenda was originally designed with the comics format in mind: “About this time Marshall Field started a new newspaper in competition with the Chicago Tribune,” Messick told Cartoonist Profiles in 1972.  “This was a period when comic books were big and so the Tribune decided to put a little supplement over the top of their regular funnies to look like a comic book to help beat the Field competition. They needed 8 comics for this extra section and Batch called me to alert me to the situation. Mollie Slott, then the syndicate editor, thought that only a woman could do Brenda Star, so this was how I started.”

A historically important character for the WWII era and beyond, there are several issues of the Brenda Starr comic book from Superior Comics including Brenda Starr V2#3, V2#6 and V2#6 in this week’s 2021 July 11-12 Sunday & Monday Comic Books Select Auction #122128 from Heritage Auctions.

View the certification for CGC Certification ID 1017051005 and purchase grader’s notes if available.

View the certification for CGC Certification ID 1017051003 and purchase grader’s notes if available.

View the certification for CGC Certification ID 1017051002 and purchase grader’s notes if available.