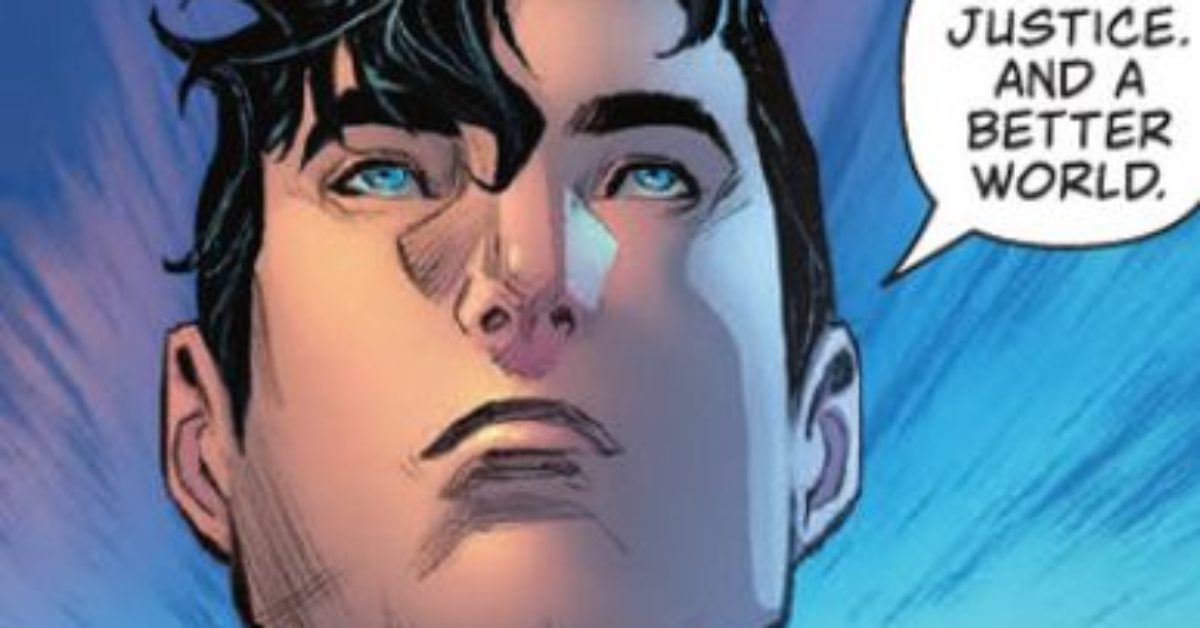 August sees the launch of Superman: Son of Kal-El, the new ongoing Superman series by Tom Taylor and John Timms. With, as Bleeding Cool told you almost two years ago now, former Superboy Jonathan Kent taking the lead Superman role while Clark Kent is… elsewhere. Possibly elsewhen. But there are changes to how this new younger Superman will do business. Not just the circumstances of his birth. This opening issue sees Jonathan Kent go up against the US government over the best way to tackle a superhuman threat.

Which also sees him turn to his best friend and son of Batman, Damian Wayne, the new Robin. Who seems to tell him everything he didn’t want to hear. And reminds him that he is not just the son of Superman, but also the son of Lois Lane. And dropping off some links to online news sites that promise to tell the truth that the mainstream media doesn’t want to. Bless that Damian.

But it also gives the new young Superman a chance to try out a new phrase that we may be hearing a lot of going forward with one very specific change. After all, he is a Superman for the whole world, the whole galaxy…

Now, this isn’t Clark Kent Superman, this is his son Jonathan Kent, the new Superman. Who clearly has different ideas than his dad. And as we may recall, it was The Spectre who suggested to Wonder Woman in Infinite Frontier #0 that Jonathan Kent was destined to become a tyrant. This comic published in August will see him trying out the idea of being a more interventionist Superman rather than the preserver of the status quo that his father was. But I get the feeling that Dean Cain wouldn’t like that either. And wouldn’t need to read the comic book to have those opinions either.

SUPERMAN SON OF KAL-EL #1 CVR A JOHN TIMMS
(W) Tom Taylor (A/CA) John Timms
Jonathan Kent has experienced a lot in his young life. He’s traveled the galaxies with his Kryptonian grandfather and lived in the future with the Legion of Super-Heroes, who were intent on training him for the day his father, Clark Kent, could no longer be Superman. There is a hole in the Legion’s history that prevents Jon from knowing exactly when that will happen, but all signs point to it being very soon. It’s time for the son to wear the cape of his father and bear the symbol of hope that has told the world who Superman really is. Join writer Tom Taylor (Nightwing, DCeased) and artist John Timms (Infinite Frontier) as they usher in a whole new era for the House of El! Retail:$3.99 In-Store Date: 7/27/2021

SUPERMAN SON OF KAL-EL #2 CVR A JOHN TIMMS
(W) Tom Taylor (A/CA) John Timms
Jonathan Kent now dons his father’s cape, but can he be Superman and still have a normal life? It’s tough in this modern world. Danger is everywhere. The new Superman learns this the hard way on his first day of college, and a deadly attack forces Jon to step from the shadows and into the spotlight—where his identity is exposed to the Truth, an activist news machine ready to upset everything. But first, the son still has some things to learn from his father—and a few cool toys to inherit. Ask yourself, what would you do with your very own Fortress of Solitude? This all-new chapter in the legacy of Man of Steel has only just begun to reveal its surprises! Retail: $3.99 In-Store Date: 8/24/2021

SUPERMAN SON OF KAL-EL #3 CVR A JOHN TIMMS
(W) Tom Taylor (A/CA) John Timms
Jonathan Kent hasn’t been Superman for long, but he’s upset some powerful people with his heroism. And the underground news source known as the Truth is helping Jon open his eyes to evils in the world that could be more powerful than the new Man of Steel. Continuing the brand-new saga of Superman from Tom Taylor, the writer of Nightwing, and John Timms, artist on Future State: Superman of Metropolis. Retail: $3.99 In-Store Date: 9/14/2021