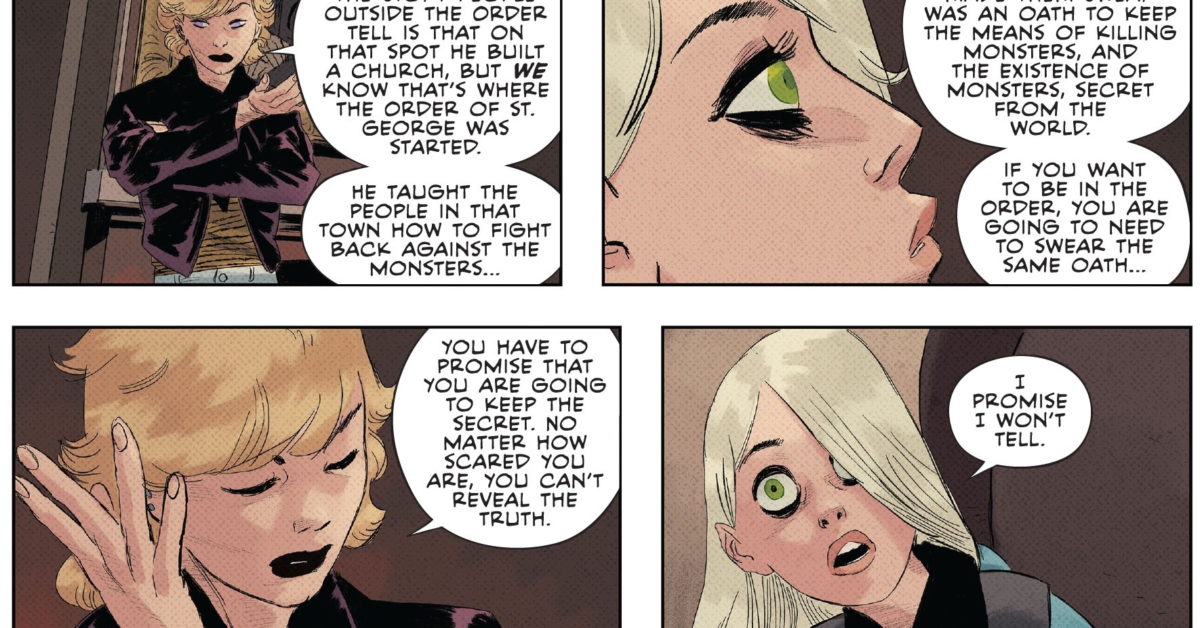 Last week’s release of Something Is Killing The Children #17 by James Tynion IV, and Werther Dell’Edera already pulled back the curtain on the mysterious House of Slaughter, seemingly introducing Hogwarts-like rooms (i.e., “houses”) and placed both Erica and Aaron in the “Black Room.” We’ve seen other members of the House of Slaughter wearing bandanas, including white, red, and blue, but as of yet don’t know what they signify and if there are additional “rooms” within the order. Will Enter The House Of Slaughter tie directly into the origin of Erica Slaughter, creating not only a perfect jumping-on point for new readers but becoming a must-have for current fans?

And if so, retailers and fans would be smart to check their orders for Something Is Killing The Children #18, which will release just ahead of the FCBD issue… and I’m told features not only a first appearance but a critical moment in Erica Slaughter’s origin. That issue is up on Final Order Cutoff this coming Monday, July 5th. Or is Enter The House Of Slaughter setting up something else entirely? Only time will tell, but in the meantime, maybe pick up a copy of Basilisk #1 second printing if you still can?

SOMETHING IS KILLING THE CHILDREN #18 CVR A DELL EDERA
BOOM! STUDIOS
MAY211005
(W) James TynionIV (A/CA) Werther Dell’Edera
What secrets lie at the heart of the House of Slaughter? Erica, and her rival Aaron, will soon learn as they are pulled deeper and deeper into the Order of St. George… but the truth may destroy them.In Shops: Jul 28, 2021 SRP: $3.99

Oh, look, it has a 1:25 variant by Wesley Craig as well… of course, now that everyone knows this before FOC, it will suddenly be easier to get. Of course, that’s what they said about X-Factor #10 as well.