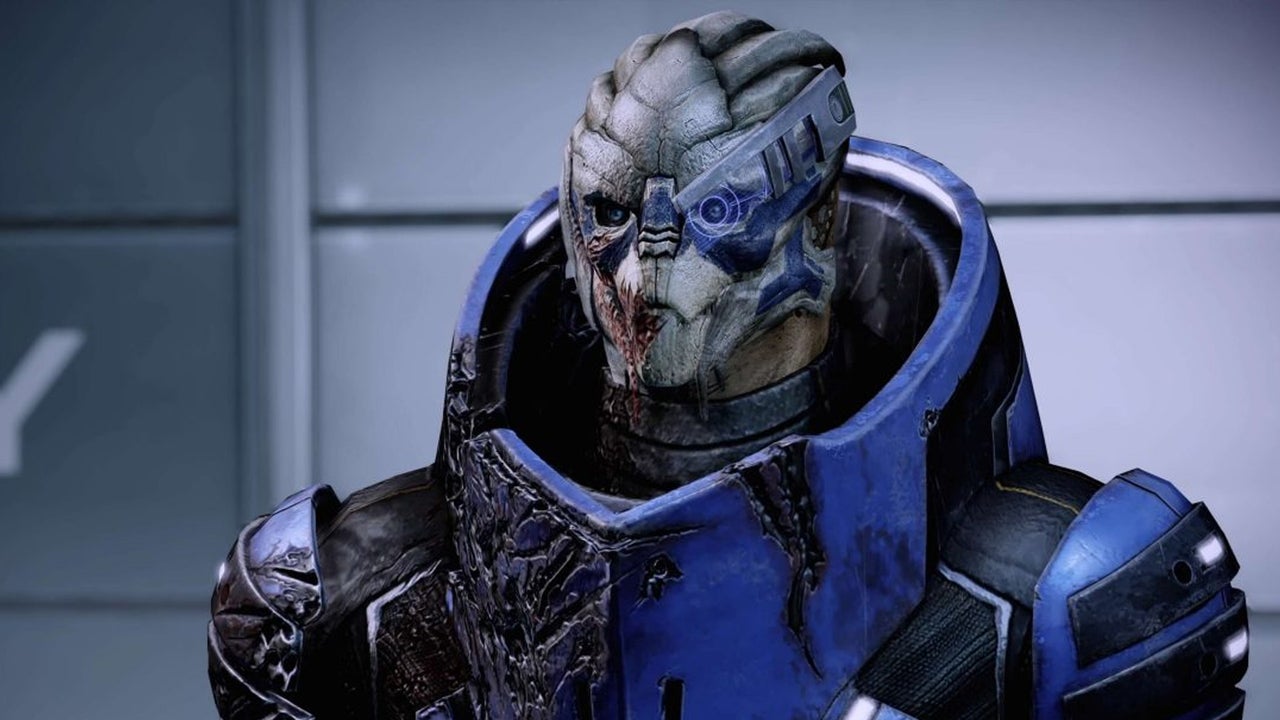 Going directly from the Legendary Edition of Mass Effect to Mass Effect 2 is a dramatic change. Where the first game can still look and feel a bit janky, the second now plays like a fully modern third-person, cover-based shooter that, thanks to its 4K upgrade, looks almost good enough to have been released for the first time in 2020 rather than 2010. Its gunplay may not be the best of its kind, but it’s certainly fun enough to keep battles interesting throughout the length of the campaign. Of course, far more importantly, Mass Effect 2’s story and characters are top-notch and memorable, building on BioWare’s already amazingly well constructed science fiction universe and culminating in what is – without hyperbole – one of the all-time best finales in gaming history.

The improvements in the Legendary Edition are largely graphical – the 4K textures are almost as sharp as a modern game, though I spotted things like guns or random props that looked a little blurry here and there. Granted, the facial animations don’t compare to the motion-captured performances we see in games like The Last of Us Part 2 or Spider-Man: Miles Morales, but they’re a step up from the first game and good enough to not distract from what’s happening on screen. Playing on Xbox Series X, it ran flawlessly at 60fps (my TV’s not quite capable of 4K/120Hz, but EA says Mass Effect is), with the biggest visual problems I saw amounting to some small animation glitches. The same powerful photo mode is available throughout all three games in the trilogy too, and Mass Effect 2 is a great way to take advantage of it, being a significantly better-looking game than the original. (It’s quite annoying, though, that the Series X’s Quick Resume is not supported, so my kid’s obsession with New Super Lucky’s Tale meant I had to go through the start screen every time.)

Outside of that, all of the DLC is now integrated into the campaign in a way that’s much smoother. Having a bunch of stuff unceremoniously dropped into my inventory because I bought something never felt good, and having to use credits to buy them at in-game stores instead is literally a small price to pay for better immersion. There are some visible seams around where the DLC was welded in, however – it’s still very noticeable that the two permanent companions that were added, Kasumi and Zaeed, are less conversational than the rest of the team once they’re on your ship.

I also greatly appreciated the tweaks made to the planet scanning and mining minigame – it’s still fairly tedious to manually scan over globe after globe looking for minerals to use on upgrades for your ship and gear, but slightly less so thanks to conveniences like the markers that show where you’ve already launched a collection probe. And it’s still preferable to driving around empty worlds in the Mako in the first game.

Choosing which order to do missions in is just enough openness to make me feel like I was in control of the story.

Part of why Mass Effect 2 holds up so well is its unusual structure. Its main quest is to stop a group of aliens who’ve been abducting entire human colonies, but the real meat of it is building your team – first (usually) by recruiting them and then with a second mission in which you earn their loyalty and unlock their extra skills. Each one of the 12 characters (including returning favorites Garrus and Tali) has an interesting backstory to delve into, and they’re all different and distinct. Even though there are several stories that deal with family, resolving Jacob’s quest to find his father is completely different in tone from those involving Samara’s daughter, Miranda’s sister, or Thane’s son. Meanwhile, Kasumi’s mission is a short heist, while Jack’s is a jailbreak and Grunt’s is a straight test of combat befitting of a krogan warrior. The arrogant and hilariously blunt salarian, Dr. Mordin Solus, stands apart as a breakout new character. All of that variety in the stories it tells is one of Mass Effect 2’s great strengths, and being able to choose which order to do them in and which characters to bring with you on each mission is just enough openness to make me feel like I was in control of the story.

Through these encounters and conversations with your squad afterwards you get to know these characters well by the end of the roughly 40-hour story, and that means when their lives are legitimately endangered in the finale there’s real tension to it – especially knowing that the consequence of making the wrong choice is that those characters will be absent from the sequel if you carry over your save file. It’s masterfully done, and that final mission remains unsurpassed in my mind, even 11 years later.

It’s masterfully done, and that final mission remains unsurpassed in my mind, even 11 years later.

Even though I remember being somewhat disappointed with the choice back in 2010, history has validated BioWare’s decision to almost completely abandon inventory management in favor of a simplified system where you simply pick your squad’s guns from a list of weapons available to each class. Especially with a larger roster of companions, the thought of collecting enough gear to individually equip all of them with weapons and armor seems like it’d be a major chore.

Likewise, the switch to using ammo instead of the original Mass Effect’s weapon cooldowns is a change I’m fairly neutral on. It can force you to vary your weapon use in prolonged fights, but the large amount of ammo that drops from enemies and unlimited use of biotic and tech abilities from you and your two squad members meant that was rarely a problem (and this was playing on the Veteran difficulty setting).

Combat works well in large part thanks to weapons that all look and sound powerful when fired – especially my Vanguard class’s favored heavy pistols. There’s also a substantially wider variety of enemies to shoot at this time; you don’t even encounter the main enemy – the Collectors – until you’ve already spent a good number of hours fighting mercenaries, robots, Geth, and more, and their AI can put up a respectable fight. Controlling your squad in combat is simple, but positioning them doesn’t seem all that important unless you’re playing at the highest difficulty level; I rarely bothered because they were usually smart enough to stay out of harm’s way while also contributing to the battles. Their main usefulness is their powers, which you can use as though they were your own. I had a lot of fun using a biotic character like Miranda or Jack to bowl over a group of enemies with a shockwave, then simply shooting them while they were down and out of cover.

Working for the Illusive Man has its advantages.

During this playthrough I went out of my way to make every Renegade decision I could, often taking a “shoot first, wound the hostage” approach to conflict resolution and ruffling feathers wherever possible. I’d never played this way before, and it certainly gave things a different flavor than what I remembered from playing as a male Paragon when it first came out. Sure, it was a significant pivot from my Shepard’s behavior in Mass Effect 1, which was mostly Paragon but with an occasional tough-love edge to her, but the surprising intro sequence that leads to Shepard being recruited into the pro-human, borderline-terrorist organization Cerberus more than justifies a personality shift for the character if you choose to go that route.

The Legendary Edition’s version of the original Mass Effect updates the first game of BioWare’s amazing sci-fi RPG trilogy enough that a modern audience can play through it and enjoy its spectacular story and characters without being asked to suffer much for the privilege. Combat and driving sections are still lackluster, but a universe this dense with rich lore and consequential decisions is a pleasure to come back to and to welcome newcomers into. After replaying, I’m surprised at how much I’m looking forward to diving into the next two games. – Dan Stapleton, May 21, 2021

Working for the Illusive Man has its advantages, such as an entertaining performance from Martin Sheen, who creates enough ambiguity about his true motives that he fills the role of a nuanced villain without actually being Shepard’s antagonist. He also provides a fancy new version of the Normandy that comes equipped with an AI (voiced by Battlestar Galactica’s Tricia Helfer) who banters with Seth Green’s Joker in the pilot’s seat. In fact, it’s a constant delight to spot all the recognizable actors who populate the Mass Effect universe, including Yvonne Strahovski as Miranda, Carrie-Anne Moss as Aria, Lance Henriksen as Admiral Hackett, Shohreh Aghdashloo as Admiral Shala’Raan, and Michael Dorn as Gatatog Uvenk, among many others.

One thing Mass Effect could never seem to get right is its vehicles. Despite jettisoning the Mako, Mass Effect 2’s Firewalker DLC added in the Hammerhead hovercraft, and it’s only a slight improvement that is fortunately used sparsely in optional missions. Zipping around in the Hammerhead is an okay change of pace from on-foot combat, but rarely more than that – all you can do is jump, shoot, and hover over glowing spots to collect things. The missions where you fight enemies are annoying because of how fragile your shields are, but it becomes a non-issue when you realize you can easily blast targets from such a distance that they can’t fight back.

Overall, I can’t give you the precise number of hours played on my save file because a bug resets the clock every time you load it up. But when you factor in all of the DLC missions – which are mostly excellent and included a couple of lengthy and involved episodes I’d never gone back to play before – it’s easily over 40 hours if you go out of your way to do as much as possible before going into the final battle, as I did. The vast majority of those hours are outstanding.

Steam’s new storage manager will show you where your game’s gigabytes are
Semper Fortis Esports rebrands Top Blokes to SMPR
Son of Kal-El: The Story of Jon Kent
The Sims 4 players are flooding their homes with the new pond tool
Exploring the Narrative of Lost at Sea