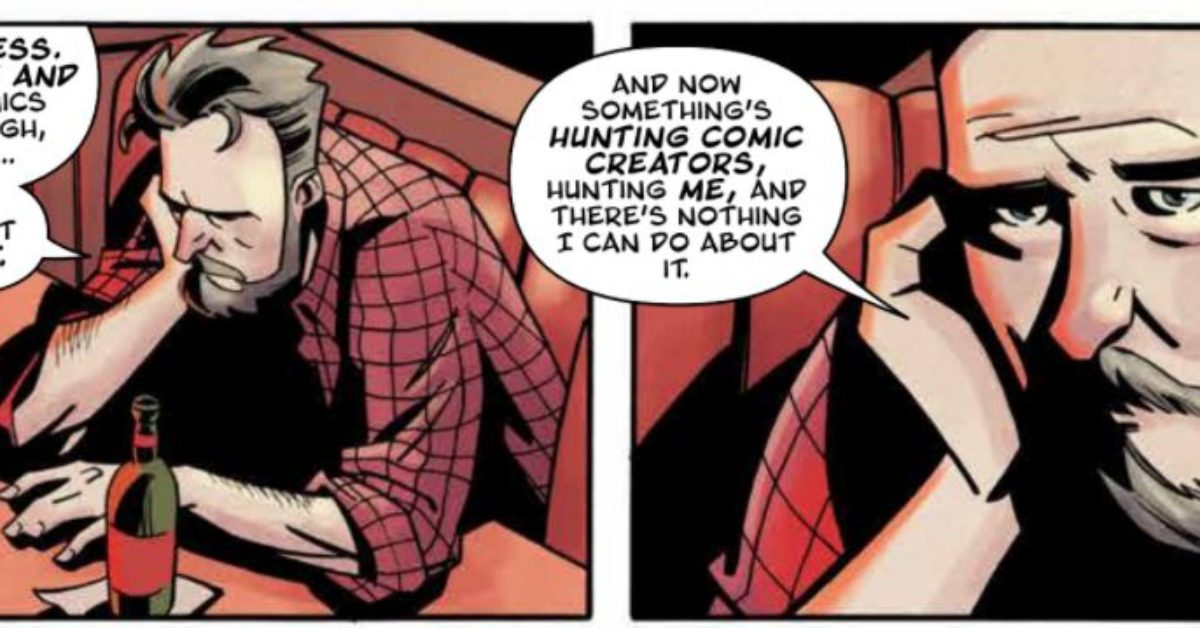 Oh, and you thought only X-Factor #10 had the big last-page reveal this week? Not a bit of it. Crossover #7 is a “very special” episode of the Crossover series written by Donny Cates and drawn by Geoff Shaw, which features Chip Zdarsky and is written by Chip Zdarsky and drawn by Phil Hester. A comic book in which comic book characters from all over have taken their war into the real world.

In issue #1 of Crossover, as well as the referenced death of Brian K Vaughan, there was a mention that Chip Zdarsky – real name Steve Murray – was missing. In Crossover #7, we discover that he has been on the run, fearing being hunted by his own creations.

But there’s someone he really fears amongst all the comic book creations, from Sex Criminals #14. Himself.

He’s on the run from himself, or rather a version of himself that Steve calls Chip, that he puts down on paper and plays on the internet. This one.

It still doesn’t go well though, he is still being hunted, or rather they both are. Could it be Matt Fraction? No clues. But Steve Murray does know who to go to for help.

And we haven’t seen them at Image Comics for some time.

Christian Walker and Deena Pilgrim are the stars of Powers, the creator-owned cops-in-a-world-of-superheroes comic book series written by Brian Michael Bendis and drawn by Michael Avon Oeming, first published by Image Comics from 2000 to 2004, then at Marvel Comics from 2004 until 2017, then at DC Comics from 2018 to 2020. It was also turned into a TV series on the PlayStation Network. When Bendis no longer had a creator-owned deal at DC at the beginning of the year, the book lost its publisher and was pulled off ComiXology again. It currently has no home, and neither do his other titles. Could Powers, as well as Bendis’ many other creator-owned titles, be returning to Image Comics? Or is this just a flying visit? We note that subsequent issues of Crossover are a little police-heavy…

CROSSOVER #8
IMAGE COMICS
MAY210080
(W) Chip Zdarsky (A) Phil Hester, Ande Parks, Dee Cunniffe (CA) Chip Zdarsky (A/CA) John J. Hill
“MEANWHILE,” Part One After the massive events of the last arc (and not counting that weird issue that CHIP wrote… what the hell was that all about?), the adventure continues as new foes and new allies join the fold to uncover a deadly mystery beyond the walls of the dome. With special guest appearances by [REDACTED BY LEGAL]!In Shops: Jul 28, 2021 SRP: $3.99

The Flash vs. Psycho Pirate Rematch in Infinite Frontier #3 [Preview]
Switch vs. Steam Deck: Gabe Newell reckons ‘you’re going to know which one is right for you’
Gen.G expands PUMA partnership
INTERVIEW: It’s a crazy busy year for BATMAN: THE LONG HALLOWEEN screenwriter Tim Sheridan
Suggestive Gaming Breaks Down “What You Need to Know” About Psychonauts 2