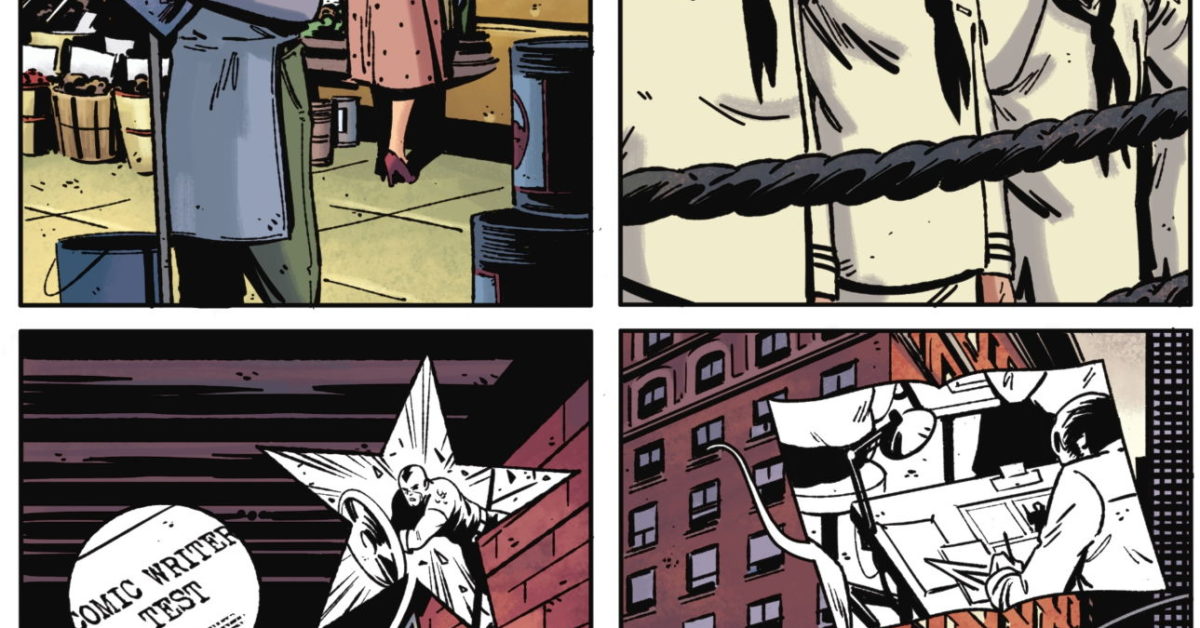 Writer/director/producer Lawrence O’Neil, best known for the movies Breast Men and Throwing Down was the son of Dennis O’Neil who died one year ago. And in today’s Green Lantern 80th Anniversary Edition, with Batman artist Jorge Fornes, creates a truly remarkable tribute to his father, telling his life with hardly a single word, yet using the comic book medium to its fullest.

So we see the speech ballon reinvented, taking on different shapes with contents that sometimes match the shape directly and sometimes with a twist, through Dennis O’Neil’s life, the good and the bad, as the world and his work, changes around him. Including this two-panel scene, with Dennis O’Neil and his wife Marifran watching TV as media starts to reflect his work and his passions…

…and then as it starts to become ubiquitous, but without his wife to share it with. And without her, his own life becomes darker, more untidy, and haphazard. It is a beautiful and tragically written scene that used every millimetre of a comic book panel to tell the story it needs to tell.

I used to talk to Dennis O’Neil a lot when he used to write for Bleeding Cool, sharing his notes from the classes he taught at New York’s School Of Visual Arts, but I learned so much more about the man from these few pages, written by his son, than I did before. This story will get nominated a lot for many an award and will deserve all of them.

GREEN ARROW 80TH ANNIVERSARY 100-PAGE SUPER SPECTACULAR #1 CVR A DAN MORA
(W) Various (A) Various (CA) Dan Mora
CELEBRATING THE EMERALD ARCHER’S 80TH ANNIVERSARY! For the last eight decades Green Arrow has been one of the premier (and loudest) characters in the DCU, always at the forefront of where the superhero genre is headed. This over-sized anniversary issue follows in those footsteps, as an all-star lineup of Green Arrow creators, alongside some of the gifted creators of the modern era who have been inpsired by Oliver Queen, unite to pay tribute to the Battling Bowman. See what the past, present and future have in store for Oliver Queen, Black Canary, Connor Hawke, Arsenal, Red Arrow, Speedy, and more in this epic special! Retail: $9.99 In-Store Date: 6/29/2021

Damian Wayne Won’t Be Going Anywhere In New Superman Comic
ComicCon@Home ’21: Dynamite drops big reveals on their upcoming new titles
Eternals: Celestia Ties In Avengers 1000000 BC and Thanos in October
GRID Legends Brings Track and Road Racing to PS5 and PS4 Next Year
Neo: The World Ends With You is the perfect belated follow-up to a cult classic