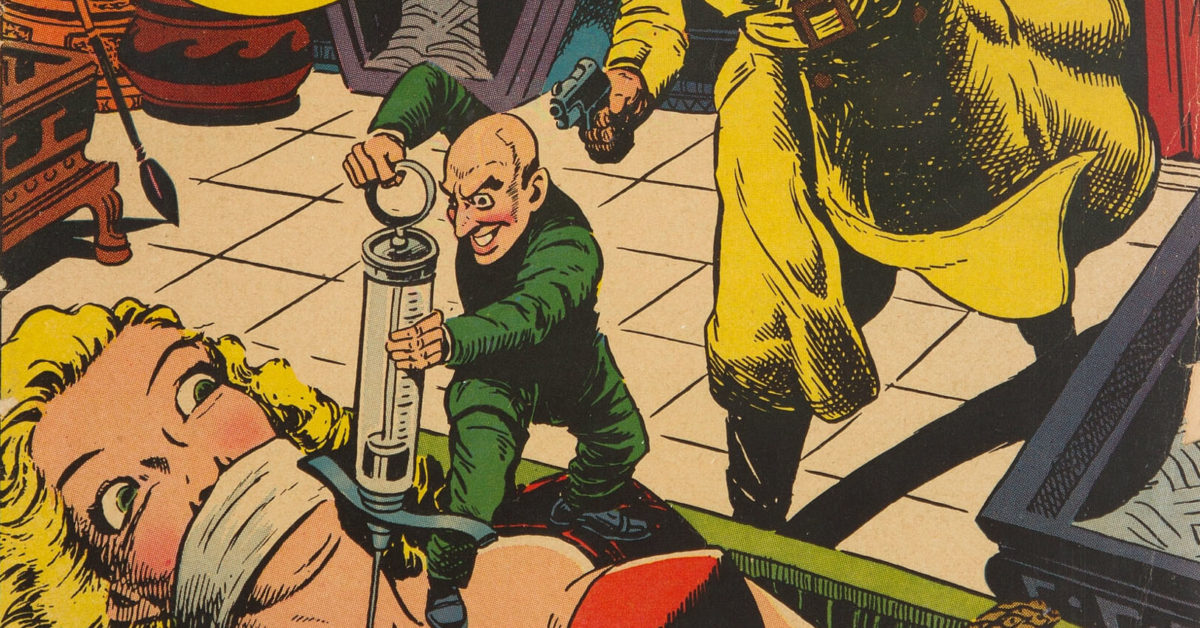 Put on the spot by a New York Herald Tribune reporter in the aftermath of one of his comic book titles having been banned by the Detroit Police Department, Magazine Enterprises editor Raymond C. Krank responded with surprising candor. “In spite of protests against crime comics,” Krank said, “the so-called harmless books just don’t sell.”  It’s likely that Krank well understood he was playing with fire.  Magazine Enterprises hadn’t bothered with the pretense that most other publishers used that the title in question was in reality pro-law enforcement (CRIME… Does Not Pay, for example) as the title of the comic banned in Detroit in 1948 got directly to the point: The Killers. Likewise, the Dick Ayers cover of Magazine Enterprises’ Manhunt #14, published in 1953 just as anti-comics sentiment was approaching fever pitch, contained elements certain to push the critics’ buttons: bondage and hypodermic needle use. There’s a copy of this fascinating example of 1950s comic book history in Manhunt #14 (Magazine Enterprises, 1953) CGC VG 4.0 Off-white to white pages available in this week’s 2021 June 27-28 Sunday & Monday Comic Books Select Auction #122126 session at Heritage Auctions.

We need to explain a little comic collecting inside baseball to understand why Manhunt #14 is a highly collected issue today. If you look closely at the CGC label and auction blurb of this issue as seen here below, you will note that it calls out the usage of the “hypodermic needle” and “bondage” elements of the cover. That’s because industry critics of that era, led by Fredric Wertham, had focused on the subjects that these elements represent. The hypodermic needle was of course symbolic of drug use, and as for bondage… I’ll let Wertham himself explain what he thought:

Wertham’s opinion aside, the cover represents a scene from the story “The Little Man Who wasn’t There” from Manhunt regular feature “Kirk of Scotland Yard.”  In this story well drawn by Paul Parker, the villain of the tale intends to inject the woman with a shrinking formula that he has perfected, and as he explains to the poor woman, “You, my dear, when less than a foot high — will be put in a cage with — starving rats!”

Fortunately, Kirk of Scotland Yard saves the day before that can occur.  Nevertheless, it’s certain that this cover or the scene it represents wouldn’t have been published after the institution of the Comics Code was instituted the next year.  The code had specific language which prohibited “scenes of brutal torture, excessive and unnecessary knife, and gunplay, physical agony, gory and gruesome crime.”

Given Raymond C. Krank’s matter-of-fact handling of his 1948 controversy, one suspects that Magazine Enterprises knew that they were pushing the limits of the day with the cover of Manhunt #14.  The Killers made a quick exit from the newsstand that year, and likewise, Manhunt effectively ended with this issue. The series re-emerged briefly the next year retitled as Red Fox.

It’s worth noting that Dick Ayers is well known for his Pre-Code covers of this era, but this cover has slipped below the radar of many collectors before recent years.  Although that is changing, this comic is a tough get — there are only 27 universal entries for this issue on the CGC Census, none of them in high grade. But there’s a nicely-presenting example of 1950s comic book history  in Manhunt #14 (Magazine Enterprises, 1953) CGC VG 4.0 Off-white to white pages available in this week’s 2021 June 27-28 Sunday & Monday Comic Books Select Auction #122126 session at Heritage Auctions.

View the certification for CGC Certification ID 1448358002 and purchase grader’s notes if available.