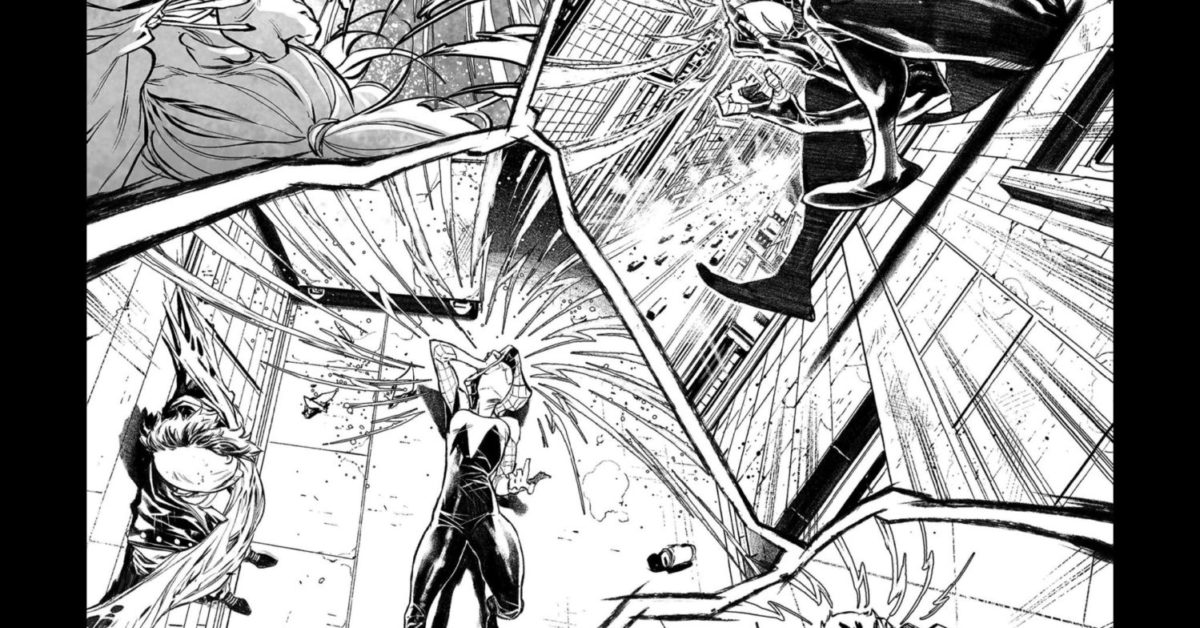 Dark Ages is the long-delayed comic book series from Marvel Comics by Tom Taylor and Ivan Coello, originally teased and promised as part of Free Comic Book Day in May 2020 and now coming out in September 2021 –  after Free Comic Book Day in August 2021. The preview showed the Marvel Universe having to deal with a complete loss of electrical power, the world over, without rhyme nor reason. And that appears to be the state of play going forward as Tony Stark, Iron Man, crashed to the ground. Here’s a first look at pages from the series proper showing us how the rest of the Marvel Universe copes. Rather than a power fantasy, it is a lack-of-power fantasy…

It seems that anyone with supernatural senses such as the Spider-Men or Spider-Gwen are hit by a wave of extreme pain,

Doctor Strange is pulling together an alliance of Fantastic Four and Avengers for.. something or other.

Whatever is happening on Earth seems to have cosmic impact, with Celestials and Triumerates alive. Is this everyone in the entire universe?

This appears to be a non Krakoan reality with the earlier form of Professor Xavier at the X-Mansion in Westchester with Jean Grey astrally prohecting, and Apocalypse doing something apocalypty somewhere else.

And while something bad is happening to Wanda (no more Wandas?) The Vision, as a synthetic being, obviously has other issues as well… Dark Ages #1 by Tom Taylor and Iban Coello is published by Marvel in September.

DARK AGES #1 (OF 6)
MARVEL COMICS
JUL210513
(W) Tom Taylor (A/CA) Iban Coello
This is what the Watcher has been watching for!
•  A danger older than the Earth threatens everything. For once, the heroes who have saved the planet so many times are almost powerless in the face of it.
•  X-Men and Avengers assemble. Spider-People and Fantastic Four come together. Heroes for Hire fight alongside Champions.
•  None of it will be enough.
•  The lights are about to go out.
•  The world outside our window…is about to end.
•  An all-new saga of the Marvel Universe as you’ve never seen it before from Tom Taylor and Iban Coello! Rated T+In Shops: Sep 01, 2021 SRP: $4.99

A Minecraft player is building the entire Zelda: Breath of the Wild map
Damian Wayne Has Granddaddy Issues in Robin #4 [Preview]
Neo: The World Ends With You is the perfect belated follow-up to a cult classic
Horizon Zero Dawn’s Aloy Is Making Her Way to Genshin Impact as a Free 5-Star Character for a Limited Time
GRAPHIC NOVEL CLUB: NO ONE RETURNS FROM THE ENCHANTED FOREST author Robin Robinson talks style and practice