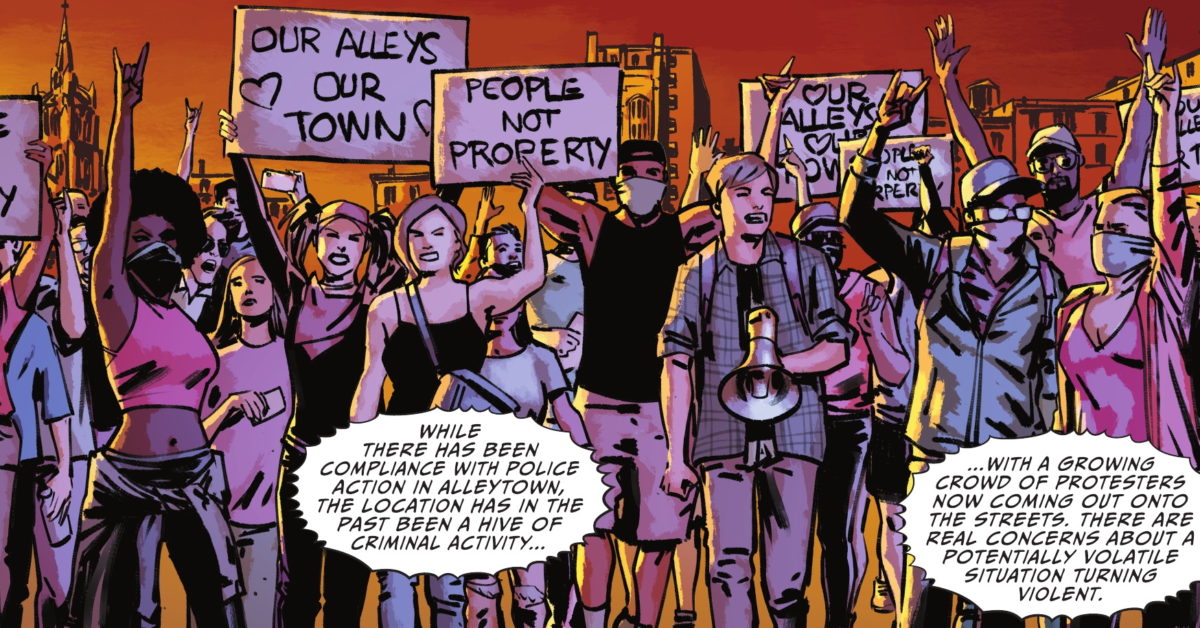 Written by Ram V, with art from Kyle Hotz, Fernando Blanco, Juan Ferreyra, and David Baron, Catwoman Annual 2021 out today tells a dark tale of crime and intrigue, pain and loyalty, with all the religious symbology it can fit inside the pages…

But it also sits alongside current Batman continuity as the private army The Magistrate, being used to police the streets of Gotham in Future State.

In Future State, this seems to be the norm accepted, even supported, by the population of Gotham as the Batfamily are hunted down alongside the Batman villains, imprisoned or executed on the streets by The Magistrate, Peacekeepers, Cybers, Drones and the like. But in Catwoman Annual? The people fight back.

So the big question to ask maybe, if Future State is still a thing that’s going to happen, because this Gotham seems to be fighting back more.

Will the population be completely subdued? Or is this where Gotham fights back against its so-called destiny and the work of Simon Saint and Mayor Nakano?

CATWOMAN 2021 ANNUAL #1 CVR A KYLE HOTZ
(W) Ram V (A/CA) Kyle Hotz
Father Valley is a mystery. His unusual style as a hit man, his habit of keeping a bible designated for each of his targets, his macabre and particular method of elegant savagery, his insistence on waiting until his target has reached their highest point before he strikes them down—these are all strange and enigmatic traits that have remained unexplained…until now. Bear witness to Father Valley’s past with the Order of St. Dumas, and his unexpected connection with Azrael, to learn the method to of his madness. And see, once and for all, why Catwoman should be deathly afraid of being on his hit list.
Retail: $5.99 In-Store Date: 6/29/2021