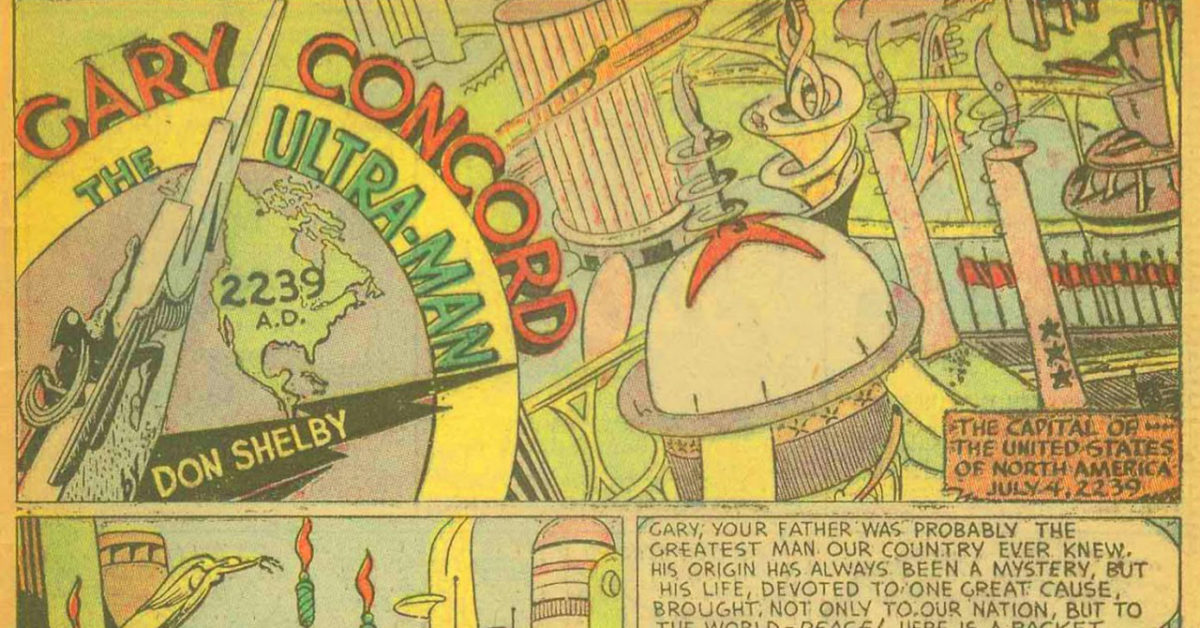 In an era of comic books heavily influenced by the onset of World War II, Ultra-Man stands out as a fascinating product of the politics of the character’s moment in history.  While his origin is clearly derivative of Buck Rogers’s origin as first seen in Amazing Stories volume 3 number 5 in 1928, Ultra-Man’s world of 2239 flips the Buck Rogers world of 2419 on its head in important ways.  In Ultra-Man’s world, America has held back its enemies but is forced to live in isolated dome cities completely cut off from the outside world in an effort to keep it safe against the ravages of the world’s tyrants.  There’s a copy of the first appearance of Ultra-Man in All-American Comics #8 (DC, 1939) CGC VG- 3.5 and an All-American Comics #11 (DC, 1940) CGC GD- 1.8 available in this week’s 2021 June 27-28 Sunday & Monday Comic Books Select Auction #122126 session at Heritage Auctions.

On our cover this month are pictured scenes from three of our principal features:

“The American Way”, the story of an immigrant, who turned out to be a True American; “Red, White and Blue”, the story of four real Americans, who fight all “isms” but Americanism; and Gary Concord, Ultra-man of the future, who fights for peace!

The writer of this message served as an officer in the American Expeditionary Forces in France, during the first World War and has seen war at its worst!

Now that war is here again in Europe, we hope that all of our readers will support in thought and action, our President’s Neutrality Proclamations, to the end that American boys (and girls) will not again have to undergo the horrors of war!

Remember regardless of our parentage and nationality, we are all Americans now and we must act, and think as Americans, first, last and all the time!

It’s a tangent to the subject at hand, but taking the contents of it at face value, the real author of the above editorial is something of a mystery to me. Assistant editor Sheldon Mayer had just been born with World War I underway. If All-American Comics founder and editor M.C. Gaines had served as an officer in that war, I can find no record or discussion of it. It would be an almost unthinkable omission from the public record on Gaines, a central figure in the birth of the Golden Age of comics.  Of course, another central figure in that history was famously an officer during that period: Major Malcolm Wheeler-Nicholson.  At a glance, it would even appear that Wheeler-Nicholson was an officer of the AEF in France towards the end of the war.  But that alone would be an unusually incomplete description of his service during WWI, and besides that, he had been pushed out of All-American Comics’ “sister companies” National Allied Publications and Detective Comics, Inc. significantly before this time. Even aside from all this, it would be difficult to place him as the author of an All-American Comics editorial in late 1939.

Getting back on point: during this period of history, Franklin Delano Roosevelt faced a public and U.S. Congress that was strongly in favor of an isolationist policy as the rest of the world marched into war, but “Roosevelt argued that the isolationist fantasy of the nation as a safe oasis in a world dominated by fascist terror evoked for the overwhelming majority of Americans was not a dream but a ‘nightmare of a people without freedom.'”

In the context of the editorial above, the “President’s Neutrality Proclamations” would seem to take into account the sentiments of both the September 5, 1939 Neutrality Act and his quick subsequent attempt to scale it back, to find a somewhat more assertive path towards peace, “On the 21st September Roosevelt made his first war speech to Congress. He stated no less than four times that he would keep the United States out of war, whilst also stating that Congress must repeal the Embargo on Arms and Munitions and reinstate the Cash-and-Carry system. This would undoubtedly help the Allied forces, and the United States aligned themselves with the Western Democracies, showed their sympathy and friendship, but also made it clear they would not get involved in any other way.”

The saga of Ultra-Man and his even more brilliant father unsubtly mirrors Roosevelt’s 1939-era approach in the face of the isolationist wishes of the American public and of Congress.  In the story, Ultra-Man’s scientist father describes the country’s extreme opposition to his efforts to attain peace through what he believed were necessary wars against the world’s tyrants.  He ultimately develops an acceptable alternative in a “Formula for Peace” (as it turns out, the Formula for Peace comes in a convenient sprayable foam) which is a fairly clear analog of Roosevelt’s need at that time to seek means to turn back the tides of war without direct military action on the part of the United States.

As the story in All-American #8 describes, Ultra-Man’s father is eventually trapped in suspended animation in his underground lab.  When he emerges 224 years later, he finds that the U.S. has isolated itself in a series of enclosed dome cities completely cut off from the outside world.  But in another bit of extremely obvious symbolism from the perspective of readers in 1939, this isolation strategy has not prevented tyrants bent on world domination from threatening America. Ultra-Man himself ultimately comes to continue his father’s legacy as the leader of America, as well as the maintainer of world peace:

Dear son, it is a great satisfaction to me that you, by your scholastic attainments and physical prowess, have been chosen to succeed me as high moderator. To you has fallen the task of maintaining the peace of this world which even as I write is again being threatened…

To give you a greater understanding of my principles of peace — I now for the first time reveal the miracle and mystery of my life.

But his father’s Formula for Peace remains hidden, and while Ultra-Man looks for the elusive formula, he must wage personal battles against the enemies of peace virtually by himself.  It’s all an interesting analogy for FDR’s struggles and policies of that era prior to America’s entry into the war after Pearl Harbor.

The Ultra-Man stories from early All-American Comics are an utterly fascinating reflection of the real world events of 1939 — and constitute a complicated but fairly obvious example of war-era political propaganda. There’s a copy of the first appearance of Ultra-Man in All-American Comics #8 (DC, 1939) CGC VG- 3.5 and an All-American Comics #11 (DC, 1940) CGC GD- 1.8 available in this week’s 2021 June 27-28 Sunday & Monday Comic Books Select Auction #122126 session at Heritage Auctions.

View the certification for CGC Certification ID 1036353001 and purchase grader’s notes if available.

View the certification for CGC Certification ID 2031038001 and purchase grader’s notes if available.

Season 15 of Destiny 2 will see a change made to the transmog system
Who the #@&! Is Peacemaker?
Ghost of Tsushima: journey into the dark secrets of Iki Island
The 3DS firmware has been updated to version 11.15.0-47
Audible’s The Sandman: Act II Assembles a Dream Cast