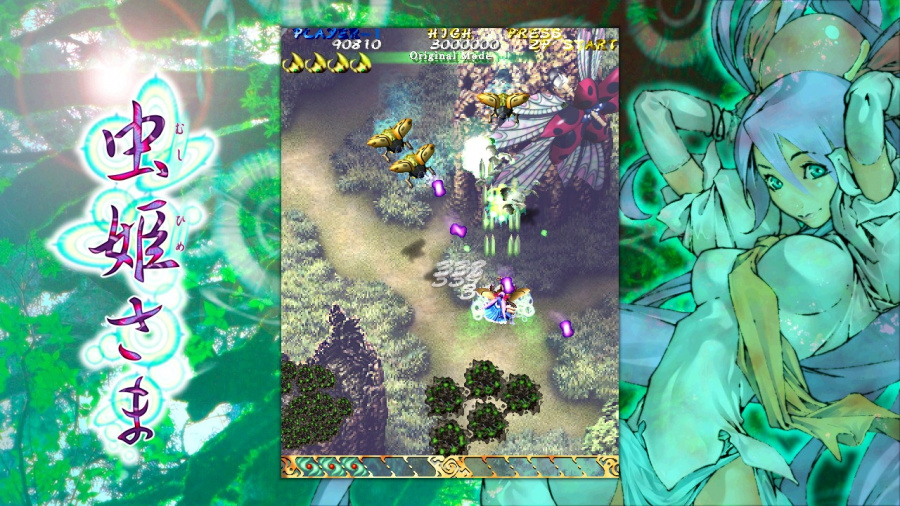 Note: At the time of writing, sales of Mushihimesama on the EU Switch eShop have been temporarily suspended. Publisher Live Wire has stated that it will return to the store “in the near future”.

Arcade shoot-em-ups in the 1980s may have started out as largely science fiction, but there have long been efforts in the genre to differentiate games with unique themes. One of the most interesting of these is Cave’s Mushihimesama (“Bug Princess”), which takes place in a world filled with enormous insects. It was initially released in 2004 in the arcades, with a middling 2005 PlayStation 2 conversion, an iOS port in 2011, and then finally an HD release for Xbox 360, Windows, and now the Switch.

The heroine is Princess Reco, who rides on top of an enormous beetle, which functions as the game’s player craft. At its core, the game is a bullet hell shooter in the same vein as nearly every other release from Cave, as you weave through dense patterns of pink bullets while collecting point items and racking up high scores. There are three different shot types you can pick at the outset, along with two option formations that provide extra firepower when you grab their associated power-ups. 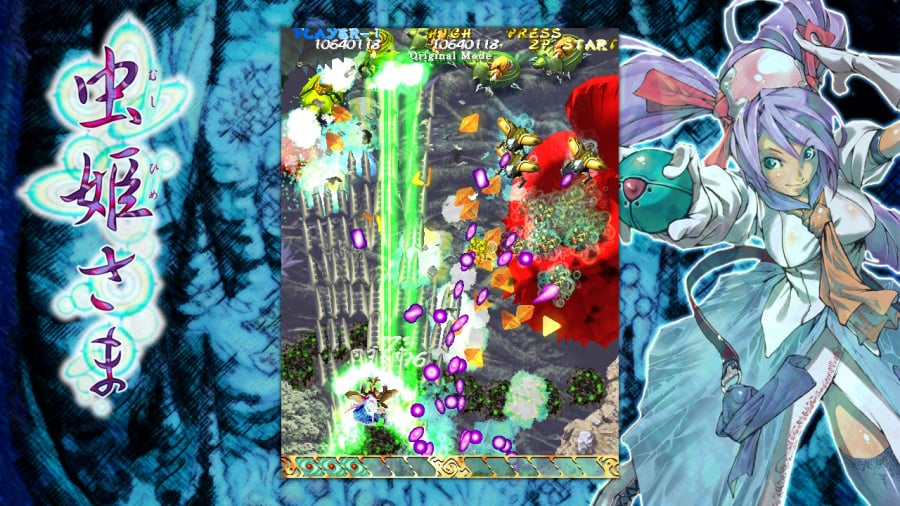 While the action is initially overwhelming, you are aided by a small hitbox – you’ll survive any attack as long as the bullet doesn’t pass through the centre of your vessel, which helpfully glows when you concentrate your fire. You also have a limited supply of bombs that not only cause extra destruction, but also negate all attacks on the screen and let you escape from danger. There is some slowdown when the screen gets really packed, though this was intentionally left in from the arcade game since it helps you to squeeze through the more troublesome bullets. The game offers unlimited continues, though the ultimate goal is either to beat all five stages without using any additional credits or beat your own high score.

The highlight of Mushihimesama, though, is its familiar yet distinctive worldview: instead of tanks there are creepy-crawling bugs with turrets on their backs; instead of artillery there are poisonous plants; and instead of aeroplanes there are massive flying insects. Battleships are common enemies in shoot-em-ups, but here the entire third stage is devoted to taking out an enormous multi-segmented lobster-esque monstrosity – it’s all like something out of Hayao Miyazaki’s anime film ‘Nausicaa of the Valley of the Wind’. The action is accompanied by an intensely upbeat soundtrack courtesy of Manabu Namiki and Masaharu Iwata, composers of other legendary shoot-em-ups like Ketsui and Battle Garegga. 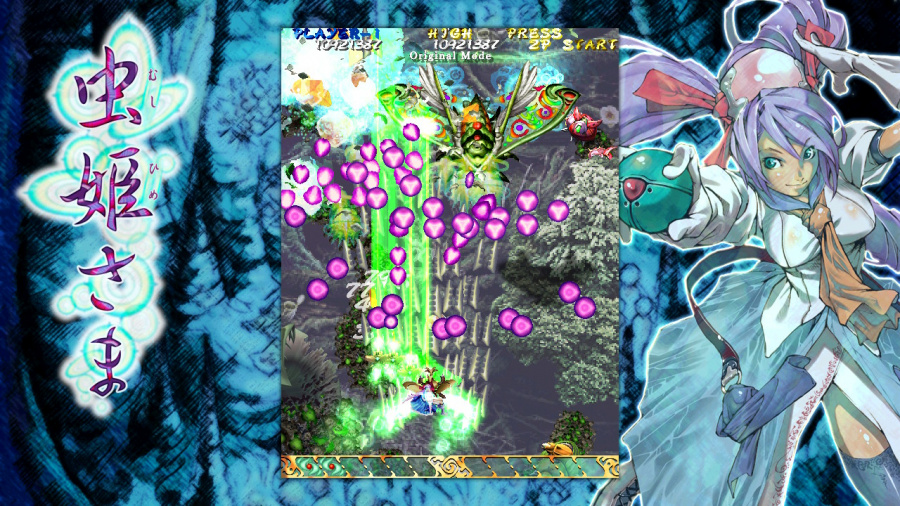 While long the favourite of hardcore shoot-em-up fans, Mushihimesama marked one of Cave’s attempts to market its intimidating games to a broader audience. Part of this strategy involved the impossibly perky teenage heroine, but it also offers three difficulty levels selectable when you begin the game. Original is the default mode, with slightly less thicker-than-normal bullet patterns, and a fairly uncomplicated scoring system that mostly revolves around grabbing gems and not dying. Maniac is a more typical Cave bullet hell experience, with more intense (but slightly slower) projectiles, and a combo system similar to other games like Dodonpachi. Ultra mode is so intense that the game gives a warning when you try to select it, with bullets that are so hostile you’ll likely be demolished within seconds of starting the first level.

Since Mushihimesama has been around the block for a while, there have been a handful of extra modes added over the years that change up bullet and enemy patterns and have different scoring methods. Most of these are included here in the Switch port, including the Ver 1.5 mode, which was only included in other releases as DLC. The Arrange mode gives you tremendous firepower right at the beginning and a generous combo system that lets you obtain stratospheric points, along with the ability to switch between weapon types at will.

The Ver 1.5 mode makes further tweaks, like the ability to vacuum up gems on the ground, and an option to give yourself max power at the beginning in exchange for more intense enemy attacks. These modes have different soundtrack arrangements, with three in total, and the Ver 1.5 music by Ryu Umemoto (Yu-No, Akai Katana). Also, while the game was originally meant to attract a wider audience, the game’s still pretty difficult for those unaccustomed to bullet hell shooters, so the Novice mode makes things quite a bit easier and will allow even newbies to see the end without having to constantly feed credits. 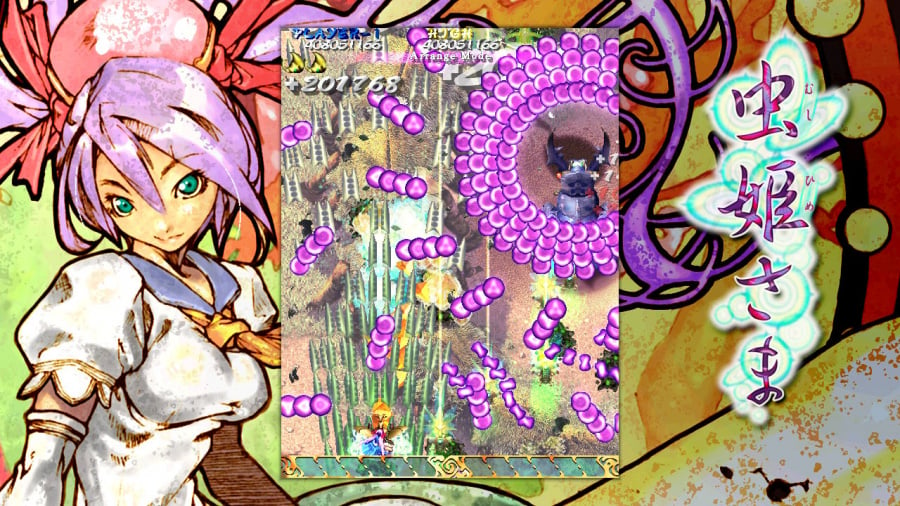 Beyond the four modes, there’s also a score attack along with an online leaderboard – the other versions of this port also let you view uploaded replays from high scorers, but at the time of writing these functions haven’t yet been activated. A practice mode lets you tweak your weapons and play specific levels, too. You can also choose a vertical screen orientation to more closely match the original arcade monitor, which is especially handy when using the Switch in portable mode, especially with an accessory like the FlipGrip.

Whatever issues that exist are minor nitpicks. The game only features the high-res sprites that have been used in all of the HD ports, rather than the 240p visuals of the original arcade version, but they have a computer-rendered look that makes them look better in higher resolutions anyway. (Probably due to this, there’s no option for scanlines, since they only make sense for low-resolution output.) The port isn’t quite as fully featured as other Cave games in the M2 ShotTriggers line like Ketsui or ESP Ra.De., but it’s still robust while also being significantly cheaper, and is also excellent from a technical perspective. Not everyone is going to dig the aesthetics, particularly those put off by either the otaku bait protagonist or the plethora of creepy insects, but you can’t say it isn’t original. And while the sequel — Mushihimesama Futari — is slightly better, this is still a fantastic title.

There’s a reason why Mushihimesama is regarded as one of Cave’s best shoot-em-ups – it’s weird and colourful, it’s incredibly refined, and the many gameplay modes ensure that both newbies and veterans will be kept busy for quite some time.

A Minecraft player is building the entire Zelda: Breath of the Wild map
Switch vs. Steam Deck: Gabe Newell reckons ‘you’re going to know which one is right for you’
INTERVIEW: Cullen Bunn discusses THE LAST BOOK YOU’LL EVER READ
The Pokemon Unite devs are asking for feedback on the game via a survey
WePlay Collectibles: How NFTs can add value to fans