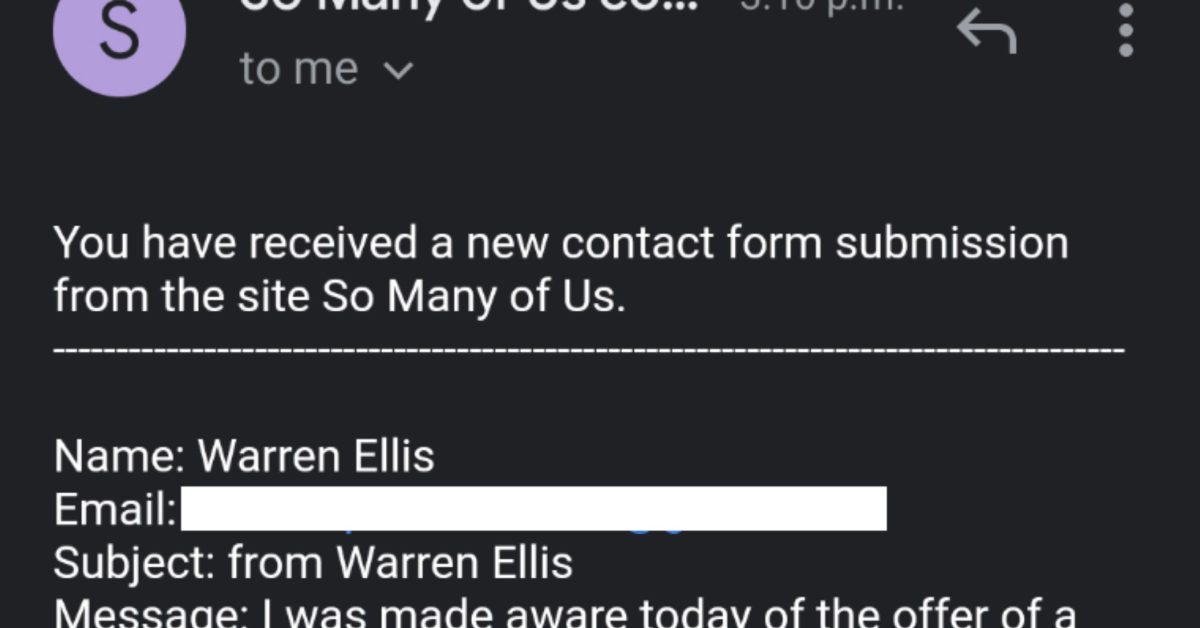 After news that Warren Ellis was returning to comics with Ben Templesmith from Image Comics, there were considerable negative responses from comic book creators and commentators, They concerned a series of multiple allegations of sexual harassment and grooming made against Warren Ellis and exposed en masse less than a year ago. The So Many Of Us website which had collated sixty-two experiences from over a hundred women added a new statement to their front page stating that “We called for openness, accountability, and growth, extending an offer of working with Ellis on some form of transformative justice. Since his public statement a year ago, to the knowledge of these authors, Ellis has still not taken direct responsibility for his destructive behavior nor attempted to tackle the circumstances that allow such behavior to go on unchecked both on and offline.”

More prominent Image Comics creators had started to comment as well, such as James Tynion IV of The Department Of Truth who tweeted “I can’t in good faith support new work by Warren Ellis, and so I won’t. I’m disappointed in Image for publishing it. When the news started coming out about WE last summer, I was so sure that he was going to be the sort of person who was going to pull a Dan Harmon, own up to his shitty behavior in a public way and carve his own path forward. But he didn’t. I was doubly sure because the brave folks who came forward at http://SoManyOfUs.com  laid out such a clear path for him, one literally tailor made for the kind of humanist he always purported to be. But he didn’t. Last summer was so shitty in so many ways, and I just wanted to believe that somebody I respected as much as I did was going to be who I wanted them to be. But he wasn’t. It’s another case of heroes faltering. Of the institutions that made me want to work in this industry not living up to the version of them in my head. Like so many other times working in this business, I was deeply disappointed, and still am.” Scott Snyder of Nocterra also posted, saying “A year ago when the revelations about Warren Ellis came out, we removed him from the Death Metal books in the hopes that accountability would be taken, amends made, and comics would move forward and be better through difficult but crucial good work. Clearly that wasn’t the case, and for that reason I can’t support Ellis’ projects old or new. Instead, I’d point you toward the people striving to make the industry better.” In the last hour, using his announced-but-not-used-until-now Orbital Operations newsletter, Warren Ellis finally addressed this issue. He writes;

I was made aware today of the So Many Of Us collective’s offer of a mediated dialogue, and have today asked their permission to enter that dialogue. Where that will take us, I’m not sure, but I know I want to make certain that I’m doing all I can to no longer be part of the problem or in any way still perpetuating the past. I hope these conversations will be ongoing and productive for all. A year ago, I put out this statement.  In it, I did my best to respond to the many accounts of my past behavior, the harm I’d caused, and the negative effects of my poor judgments. As I have come to realize, that damage has persisted and left lasting scars for many.

In the past, I have been careless and unthinking in my personal relationships, and I again apologise without reservation. In the last year, I’ve entered therapy and taken other measures to change my behavior, and am continuing to process the help and advice I’ve received. I’ve had a lot of long, hard conversations with people who are or have been close to me, and I need to have a lot more. I’m working on change. I’ve been silent because I had a lot of work to do and still do, and have repairs still to make, and wish to proceed mindfully without causing further harm. I have, of course, been silent and isolated for too long, and should have addressed things sooner and proceeded with more speed. I apologise.

All of this should especially have been addressed before word of a new project came out via my collaborator. That was my mistake and the book was prematurely announced without Image’s input or knowledge. I should have brought up to him beforehand that I still had work to do to address my past. I should have worked with Image to make sure they were ready and comfortable to commit publicly to the project when I still had work to do to address my past. This is another example of my lousy judgment. I now add both him, and Image, to the list of apologies I owe. Naturally, trying to mend my errors now makes it look like the only reason I’m speaking at the moment is to serve that project. It’s not, but that’s irrelevant: this is about me trying to make things right—regardless of how it looks for me or how good or bad the timing is . So here are my thoughts:

I have had nearly a year to reflect on everything I’ve learned about how my behavior has hurt others and I am sorry. Repeating that over and over doesn’t make anything better for anybody, but, now I’ve had my time to listen and process and advance my understanding, there are a few further things I need to say. I acknowledge that I have done wrong. Neither my intent at the time, nor my perception of it then, erases that fact. Nor does it at all obscure that the result of that behavior has clearly affected individuals for years, and may even have inspired others to perform negative behaviour. If you are a reader who supported me, then thank you, but please don’t defend me anymore. Change doesn’t happen overnight — I’m at the start of a long road, and it’s not a road with a defined end – and it doesn’t happen in a vacuum. If you want to support me, then support efforts towards transformation of communities, industries and workplaces.

Going forward: I’ve been in therapy now for almost a year and will remain committed to that part of the process. I will continue to work on new projects with only the collaborators who have expressed their comfort in doing so with me. I ceased all public appearances, and I think I have a long way to go before such activities would be appropriate again. I am grateful to all my collaborators for continuing to associate with me, and for the difficult but instructive conversations we had to get to that point.

I’ve always kept my charitable donations private, but, in looking for ways to contribute to change without privileging my own voice, I’ve expanded my donations into the space of women’s support groups. Most recently, my last royalty cheque was split between funding therapy for young women and supporting women in the workplace. I hope to do more and will welcome suggestions of charities that I can build lasting support for. I do not yet know the fate of this newsletter. I miss talking with you, but I committed to speaking less, listening more and becoming better. There are still 23,000 of you, and it would be nice to use this platform as a tool for doing some good. I’m going to keep thinking about it, take advice from friends and take regular inventory. As I said before — I’m sorry I let you down, and I’m sorry I have failed the trust placed in me. I hope that, over time, I can earn back a little of that. Sincerely, Warren

Author Warren Ellis reached out to this collective for the first time today. We will update this site when appropriate as we attempt to begin a transformative justice journey. For full transparency, (with permission) we’ve included his message below.