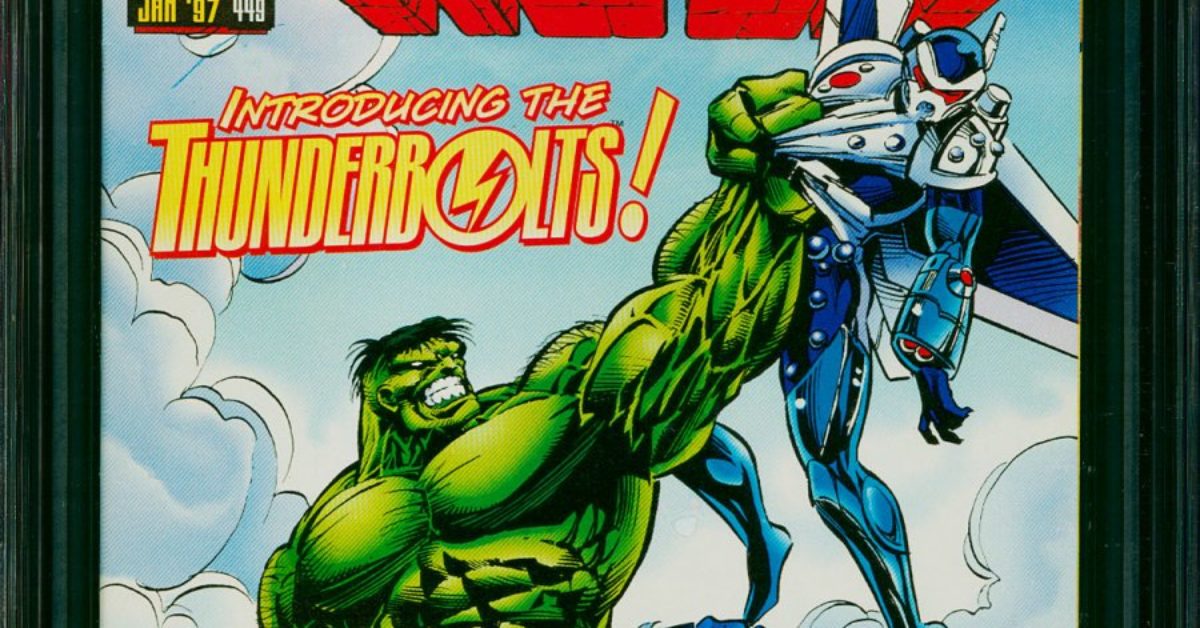 If speculation is to be believed (and it usually isn’t), the Thunderbolts will be making their debut in the MCU soon. Led by Baron Zemo, the group first appeared in Incredible Hulk #449, debuting Citizen X, Meteorite, Techno, MACH-1, Songbird, and Atlas. I remember buying this book off the rack and instantly falling head over heels for the team to the point where I will buy any issue they appear in to this day. On auction right now at ComicConnect in Session #3, Event Auction #46 is a CGC 9.8 copy of this modern key, which is skyrocketing in price right now. Already at $405 as of this writing, this one has major heat behind it. Check out the Thunderbolts against the Hulk below.

Thunderbolts Keys Have Room To Grow

“Somewhere in the western United States, the Hulk and Janis Jones leap across the desert when they are struck by a missile as they are sent flying toward a small town. Janis is saved from a fatal fall by an armored man calling himself Mach-1, who thinks that she is a prisoner of the Hulk. However, he is surprised when she turns around and blasts him with her staff. Meanwhile, the Hulk lands in the middle of a rodeo where he is confronted by Meteorite, Techno, Atlas, and Songbird, members of a new superhero team calling themselves the Thunderbolts!”

This is already fast becoming one of the key modern books to grab, and it will only get more expensive in this back issue climate. So go here to bid on this copy of this book, Thunderbolts fans. While you are there, click around a bit and take a look at what other books are taking bids today and this week. There are a ton of gems in there and something for any type of collector.