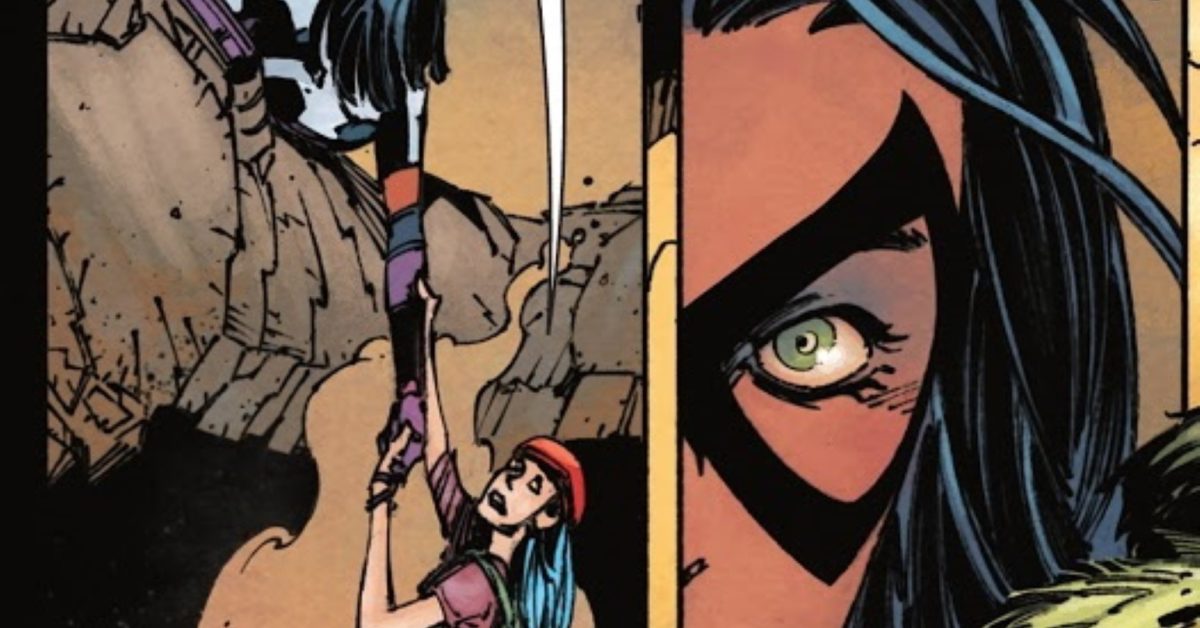 It’s the eternal question rarely asked in the Batman comic books, who would live in Gotham? This week’s Detective Comics #1038 published by DC Comics underlines the unlikeliness of people not just moving out. Whether that’s the Riddler lockdown, No Man’s Land, the recent A-Day terrorist attacks, and the encroaching fascist police state, today seems to demonstrate the dangers from two specific different directions that would, to any reasonable Gothamite, indicate fleeing for the hills. First, we have Mr Worth blowing up downtown Gotham with hand-held bazookas.

With Huntress rescuing one cyclist who, it seems, has been through this kind of thing before.

“Welcome To Gotham”. So that’s alright then. Put exploding streets on the postcard and tourist ads, right? While Mr Worth gets caught by the Batman and arrested for the crime of blowing up the police station and everything else. A police station that all the police had left in advance.

And then instantly released. All the police are paid off by Mr Worth.

Before making public death threats without issue. So if you are a rich Gothamite, I can see the appeal, but if not, then you are blown up in the streets, and the people doing the blowing up, can buy off the police to even do the blowing up in the first place. So… why is anyone normal staying in Gotham? Is it just a city of the bloody-minded all wanting to make a point?

DETECTIVE COMICS #1038 CVR A DAN MORA
(W) Mariko Tamaki, Meghan Fitzmartin (A) Viktor Bogdanovic, Jonathan Glapion, Karl Mostert (CA) Dan Mora
An epic battle is taking place in Gotham City…below the city streets?! Batman and MR. WORTH are locked in a deadly duel involving a rocket launcher, a micro-cave subterranean system, and a whole lot of bloody knuckles. Can Huntress save Lady Clayface before the entire city collapses from underneath itself? Plus: the insidious VILE makes his move, and boy is it UGLY… FEATURING “MARCH OF THE PENGUIN”: Gotham’s seediest gangster is looking to take advantage of the unrest in the city, and the Penguin is finally ready to make his move! Retail: $4.99 In-Store Date: 06/22/2021

INTERVIEW: Jeremy Haun talks pandemic horror and isolation anxiety in his new book HAUNTHOLOGY
The Ongoing Evolution Of The Call Of Duty Franchise
The Biggest Green Lantern Plot Twist of the Golden Age, Up for Auction
AfterShock goes dark in a new horror anthology AFTERDARK
Joshua Dysart In Conflict With Valiant Over Harbinger