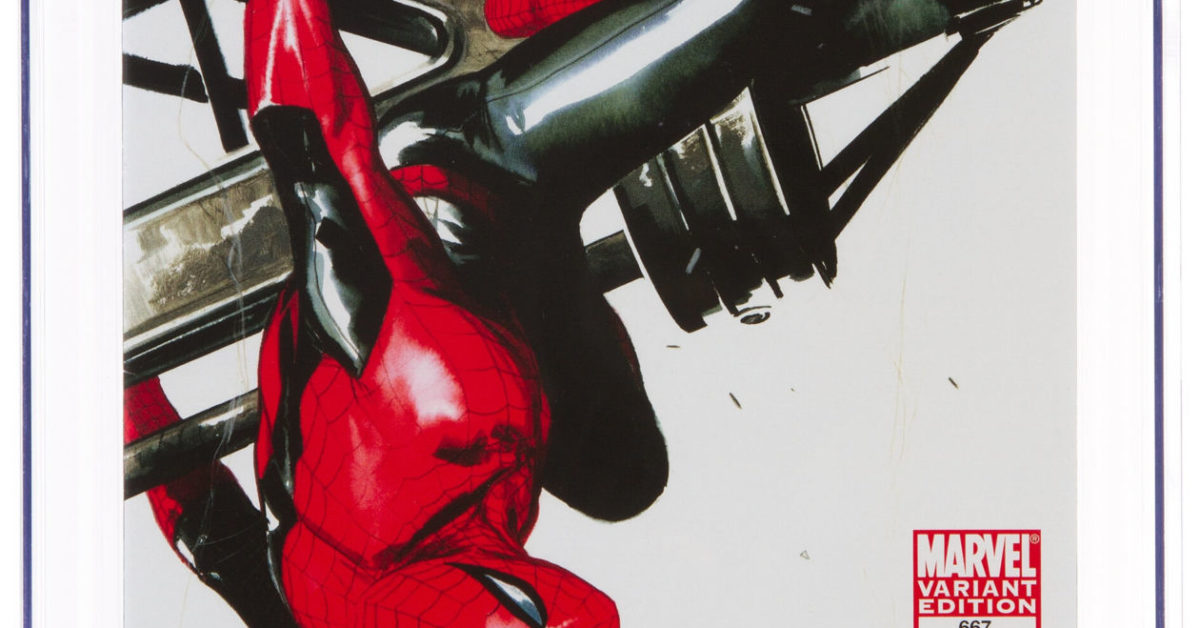 Amazing Spider-Man #667 was the first issue of the Spider-Island event in Spider-Man, where everyone in Manhattan got spider-powers. It also saw Humberto Ramos join the series, who became one of Dan Slott‘s more iconic and associated artists. And Amazing Spider-Man #667 was where it began. Marvel Comics was also beginning their use of high-tier variant covers to encourage comic book retailers to order more copies. The aftermarket for tiered covers started to ramp up as retailers were beginning to realise they could order a hundred extra copies of a comic to get a 1:100 cover and then sell that for more than the other hundred copies cost. Not too many had quite cottoned on at this point, with the 1:100 cover for Amazing Spider-Man #667 by Gabrielle Del’Otto – and Gabrielle Del’Otto wasn’t Gabrielle Del’Otto at that point either. There are an estimated 200 copies in circulation; these days, there would have been more.

A copy was listed on Heritage Auctions the other week, the first copy they’d had, CGC slabbed at 9.8. Other previous sales included a CGC 9.6 copy sold for $10,800 in October 2020, and a 9.8 went for $15,000 in June 2020. Well, that other 9.8 copy just sold at Heritage for $33,600, over double what it sold for two years ago. So if you want evidence of a burgeoning comic book aftermarket, you have the evidence right here. Reports from all over the comics marketplace have noted a rise in sales and prices of collectible comics, a combination of people in lockdown with more money to spend, a return to nostalgic childhood memories, and investors wanting something a little more physical than a non-fungible token. Whether this is a tulip market or something a little more sustainable isn’t discernible right now, but it is enough to send some folk scurrying through more recent longboxes looking for little gems like this that could pay off someone’s mortgage.

Laptop Integrated Graphics Are Still Marginal for Modern Gaming
You Can Now Pre-Order Sonic Colors: Ultimate On The Switch eShop
A new Blacksad adventure is coming and here’s a spectacular preview
Alienware Claims It Can’t Sell High-End Desktop PCs in 6 US States
FCBD Spoilers: Hulk #1 by Donny Cates and Ryan Ottley In November