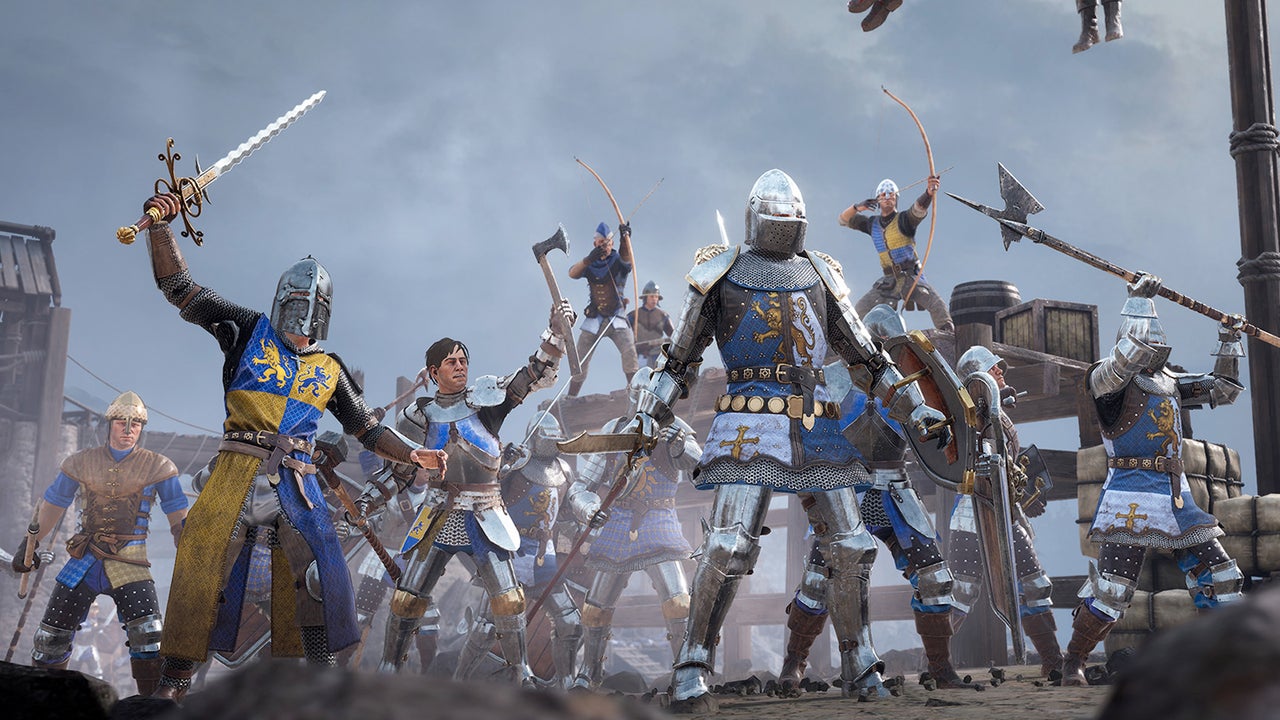 While other first-person sword fighting games like Mordhau and Kingdom Come: Deliverance have tried to sell themselves on the realism of their hitboxes or the high skill ceilings of their combat systems, Chivalry: Medieval Warfare has always been unashamed to fall a bit more on the arcadey side. Its sequel, Chivalry 2 continues that tradition, and I think it’s actually a better multiplayer experience because of that philosophy. There’s still a lot of skill involved, but it’s easier to dive in and start getting some gloriously gory kills without feeling like you’re a sheep surrounded by wolves. And that’s how you build and keep a strong community.

Chivalry 2 catapults you onto stylish, saturated battlefields with up to 64 players in objective-based team modes or a giant free-for-all. There aren’t a ton of maps right now, but I was pretty impressed with the ones we have. Each has a good variety of objectives to attack and defend, exciting terrain and architecture, an effective mix of open areas and bottlenecks, and great overall pacing. One moment you might be pushing titanic siege towers up to a wall with ballista bolts flying at you from above, and the next you might be trying to loot as much gold as possible from a village and get it back to your cart before time runs out.

Sure, there are definitely a few objectives that feel unbalanced at the moment. The bridge on Falmire, for instance, I’ve only seen successfully taken by the attackers once in the dozens of times I’ve played it. The ramp on Lionspire is pretty sticky, too. But it’s nothing that a few minor tweaks shouldn’t be able to fix. And it might even out a bit once everyone gets a bit more experience and understands how these objectives work.

I soon found that there are kits to support just about every playstyle I could imagine.

Rather than having you build out a complex custom kit with all the exact weapons and armor you want, Chivalry has 12 set classes divided into four archetypes, with four available at the start and the rest unlocked as you go. You can also unlock new primary and secondary weapons within each class, so there’s a lot of meaningful progression to work toward. I was a little disappointed I couldn’t just go crazy mixing and matching, but I soon found that there are kits to support just about every playstyle I could imagine, from a deadly crossbow sniper to a frenzied, axe-hurling berserker.

Some have stronger niches than others. There’s a rogue class which gets a bonus to backstab damage, but I never really found that I could make the most of this in team fights or one-on-one. The skirmisher, who throws javelins, is supposed to be kind of a hybrid between a melee and a ranged class, but ends up just feeling worse at both than her specialist counterparts. And shields, I found more often a burden than a boon. But the offensive monsters like the devastator and the crusader are a ton of fun. And while you’ll see plenty of people in chat moaning about archers being too powerful, it does require a lot of practice and good instincts to make the most of them.

In another clever bit of design, you recharge powers faster by doing things your class is good at and should be doing anyway.

I also admired that, within each class, special abilities tend to focus on supporting your team rather than simply making you better as a single combatant. Even if you’re not the best one-on-one fighter in the world, you can still make a world of difference in big encounters by blowing your war horn and giving a hefty area-of-effect heal to your side of the melee. And in another clever bit of design, you recharge these powers faster by doing things your class is good at and should be doing anyway, like getting kills with your charge attack as the furious raider or blocking attacks as the stalwart guardian.

The combat system is, of course, the core of everything. And with more than 30 hours under my belt, I’m loving it. It’s not the most realistic medieval brawler I’ve ever played, but this is power fantasy, not a documentary. The overall flow of it and the ways in which it limits how much an extremely skilled player can absolutely dominate the battlefield hit a sweet spot for me. Though don’t think you can easily climb to the top of the leaderboards by wildly swinging a mace around.

What We Said About Chivalry: Medieval Warfare

Lopping off appendages in gory displays of warrior aggression makes Chivalry: Medieval Warfare’s up-close and personal melee combat a gritty and fulfilling on a primal level. Though the lack of complexity sometimes works both for and against it, getting caught up in the flow of battle yields many hours of man-stabbing amusement. Like its competition, Chivalry hasn’t quite perfected the formula for medieval warfare, but it’s a violent, fun time nonetheless. – Nathan Meunier, October 9, 2012

There are just enough ways to attack, parry, riposte, dodge, and counter that it pays to be able to think on your feet and react to what your opponent is doing. But executing those moves once you’ve committed to a decision doesn’t require godlike reflexes or extremely precise mouse movements. There’s a high skill ceiling, but the difference between a pretty good player and a really good player is smaller than in a game like Mordhau, which I think is a smart decision. Bad and okay players are always going to outnumber the truly exceptional ones, and they need to still be able to have fun or they’ll abandon you. Even if you’re the best blademaster in the realm, you need teammates to stand on the objective. It also doesn’t feel too arcadey, which is an issue I had with the first Chivalry.

The difference between a pretty good player and a really good player is smaller than in a game like Mordhau, which I think is smart.

Aside from the very first couple of days, the servers seem to be holding up pretty well, too. Getting into a match is lightning quick, thanks in no small part to the willingness to include a few bots to get those huge, 64-player matches off the ground. I’ve rarely experienced any major connection issues while playing for at least a few hours a day. The skill-based aspect of matchmaking could still use some work. It will auto-balance teams if one side seems to be completely dominating, but there doesn’t seem to be anything to keep the swapped players from going back to their original team if a spot opens up. And I see that happen a lot. So if people are just being jerks and insisting on wearing their favorite color, you can end up in some extremely lopsided battles.

The one other thing I’ve found a bit lacking is the visual customization of your character. It’s nice that you can play as a woman for the first time, but if you do, each class only has one voice to choose from and far fewer face options than the guys get. Also some of the ladies look pretty weird, almost like they took an existing male face model and stretched it out like the title screen for Super Mario 64. There are some bizarre male faces, too, but the difference in quality is pretty easy to see.

At least there’s a good variety of armor styles, heraldry, and weapon skins you can unlock with premium currency or in-game cash you get from levelling up. Some of the skins require you to reach a certain level with the weapon before you can even buy them, so you can show off your skill with a shiny, gilded sword. And rest assured, as far as I could find there’s nothing that’s exclusively locked behind spending real money.

Rickjecting the Riccine in the Daily LITG, 3rd of August 2021
Two Riders Better Than One in Spirits of Vengeance Spirit Rider #1
Ubisoft CEO responds to open letter from employees, but group says “few points seem to have been addressed”
I Wrote the First Full Review of the Voodoo 5 6000. 3dfx Isn’t Coming Back [Updated]
Dungeon Defenders: Awakened ‘Lycan’s Keep’ DLC leaps onto Xbox One, Series X|S and PC