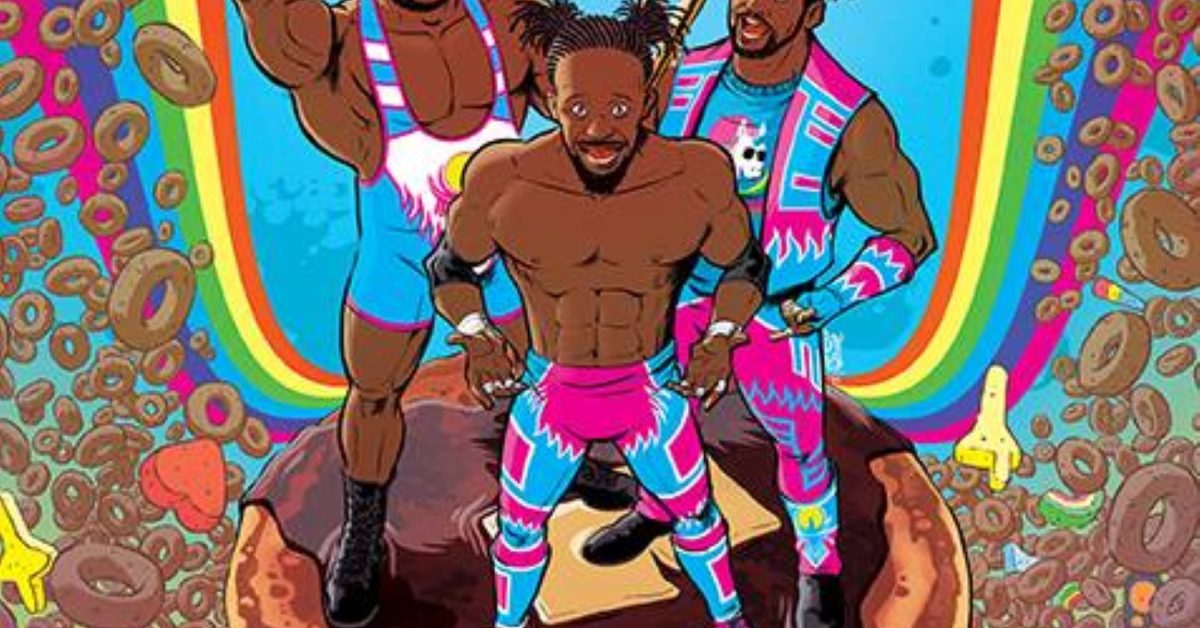 A few months ago, Boom Studios announced that they’d be publishing a two-issue limited series starring WWE superstars The New Day. Meanwhile, last week Main Event Gear, a supplier of in-ring and entrance gear for pro wrestlers, debuted photos of Xavier Woods and Kofi Kingston of New Day sporting White and Green Power Ranger-inspired outfits. And just a week ahead of Final Order Cutoff for WWE The New Day: Power of Positivity #1 from Boom… who’s even better known for publishing the most successful Power Rangers comic series of all time. So is it just a coincidence? Or a clever bit of Mark Millar/Bad Idea-level media manipulation?

We may never know, but it seems like a good time to point out the importance of The New Day in WWE (squared) circles. Not only are the eight-time tag team champs, but they also hold the record for the longest championship reign in WWE history at 483 days. In addition, Faction member and former WWE Heavyweight Champ, Kofi Kingston, has the #1 spot as the only WWE Superstar to hold tag team gold for over 1,000 combined days. The other two members of the trio are similarly impressive with Big E, who until recently held the Intercontinental championship, while Xavier Woods was recruited to host on the recently revived G4 network. With those kinds of accolades and the fact that the wrestlers are all bonafide comic book fans, it’s not surprising that Boom picked The New Day to headline their next WWE series.

Originally announced by Kingston himself at Comic-Con in 2019, The New Day series was first planned as a graphic novel. The tag team champs themselves announced it would be written by Rise of the Black Panther writer, Evan Narcisse (who’s also one of the story architects behind the Spider-Man: Miles Morales video game) and Editor-in-Chief of Vice Games, Austin Walker and also sung Narcisse and Walker’s praises in an exclusive video during Boom’s panel at New York Comic Con in 2019. And while the pandemic put Boom’s graphic novel plans for The New Day on hold, the real New Day continued to entertain fans around the world even after the 2020 WWE Draft split Big E away from his partners into the Raw locker room, while Kofi and Xavier were snatched up by Smackdown. Meaning that the upcoming comic series is the only place New Day fans can see their favorite faction reunited and relive their biggest career moments. In the end, the delay may end up being quite fortuitous for both New Day and Boom.

Will retailers take into account the new fans who have decided on “New Day Rocks” over the last year and a half? Or those discovering their historic tag team victories for the first time on Peacock thanks to WWE’s streaming deal with Universal? Or will they default to previous orders and possibly come up short?

Luckily thanks to us, they will have time to adjust orders for WWE The New Day: Power of Positivity #1 on Final Order Cutoff this coming Monday, the 14th of June. And as the New Day would say, if they miss out, “don’t they dare be sour!”

WWE NEW DAY POWER OF POSITIVITY #1 (OF 2) CVR A BAYLISS
BOOM! STUDIOS
MAY210948
(W) Narcisse, Evan, Austin Walker (A/CA) Daniel Bayliss
Who are The New Day? Kofi. Xavier. Big E. Six-time. W.W.E. Tag. Team. Champions! The. Longest. Reign. In. W.W.E. History! You know the matches. You know the catchphrases. You think you know The New Day… but now discover the origins and struggles of these three WWE Superstars before that fateful day when they realized that they’re stronger together than apart and seize their place in WWE history. Writers Evan Narcisse (Rise of The Black Panther) and Austin Walker (Friends At The Table) (tag) team up with artist Daniel Bayliss (Mighty Morphin Power Rangers) to reveal the untold story behind one of the greatest tag teams of all time! In Shops: Jul 07, 2021 SRP: $7.99