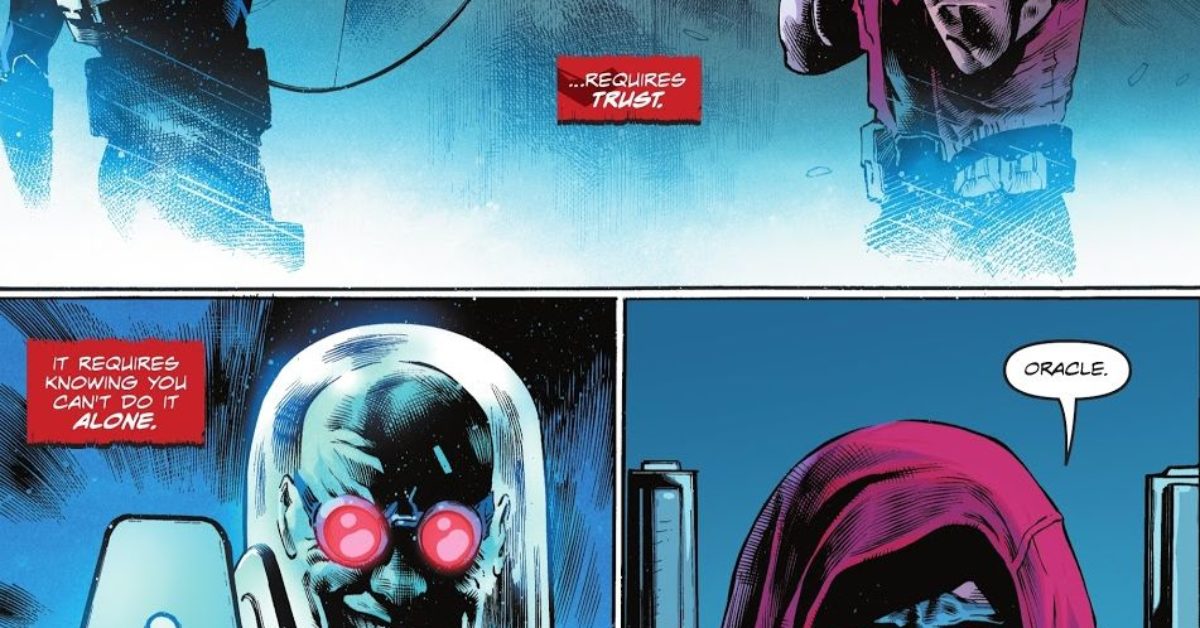 The lead Batman: Urban Legends Red Hood story from Chip Zdarsky and Eddie Barrows has seen Red Hood taking on one of the older Batman villains, Mr. Freeze – as well as himself.

But these days, Batman is all about the new villains and anti-heroes as well. Punchline, Clown-Hunter, Ghost-Maker, and more, with a new drug on the streets getting everyone all het up. So while the regular Batman comic sees Bruce Wayne dealing with the idea of a Scarecrow attack being as terrifying as an actual one, Detective Comics sees Batman and the Batfamily dealing with parasites turning folk into rage monsters…

Urban Legends has another drug, similar to the Scarecrow toxins but going the other way, Cheerdrops. Which necessitates a brand new Batman villain to stand alongside Mr. Freexe…

Welcome to Cheer. He’s a villain where everyone knows his name.

BATMAN URBAN LEGENDS #4 CVR A JORGE MOLINA
(W) Various (A) Various (CA) Jorge Molina
written by CHIP ZDARSKY, MATTHEW ROSENBERG, MEGHAN FITZMARTIN, AND CAMRUS JOHNSON art by EDDY BARROWS, RYAN BENJAMIN, MARCUS TO, AND BELÉN ORTEGA The penultimate chapter of the Grifter story is here! Grifter’s walking a deadly line between Lucius Fox and HALO’S plan…can he survive the endgame? Oh, and yeah, now Superman is after him! As old wounds threaten to sabotage Batman and Red Hood’s investigation into the Cheerdrop drug turning Gotham City upside down, they run afoul of Gotham’s coldest criminal, MR. FREEZE! And the force behind the Cheerdrops will be banking on the former Dynamic Duo’s demise… TIM DRAKE has returned to the streets of Gotham City and is seeking a new purpose, but what he finds is a string of young adult kidnappings committed by someone known only as “the Chaos Monster.” Will Tim be able to get to the root of the kidnappings, or will he fall prey to them? Critically acclaimed Future State Robin Eternal writer Meghan Fitzmartin returns to tell this Tim Drake story with rising star artist Belén Ortega. Acclaimed creator and actor Camrus Johnson writes an action-packed story featuring Luke Fox—the character he portrays on The CW’s hit television series Batwoman! Retail: $7.99 In-Store Date: 6/8/2021

DETECTIVE COMICS #1037 CVR A DAN MORA
(W) Mariko Tamaki, John Ridley (A) Various (CA) Dan Mora
Public enemy number 1: BATMAN! Public enemy number 2: Bruce Wayne?! When both Bruce and his alter ego are implicated in the same crime, the cops have some questions — and the Dark Knight is going to have to think quick or risk his identity being exposed to the world! But law enforcement isn’t the only entity hunting the Bat—the titanic MR. WORTH is ready to use all his money and power to see Batman six feet under!Featuring not one, but TWO additional epics! First up, “3 minutes” explores the early days of Lucius Fox’s introduction to the world of Batman. Then, in “exclusive”, the Gotham Gazette’s own Deb Donovan runs down the power players in Gotham City! Retail: $4.99  In-Store Date: 06/08/2021