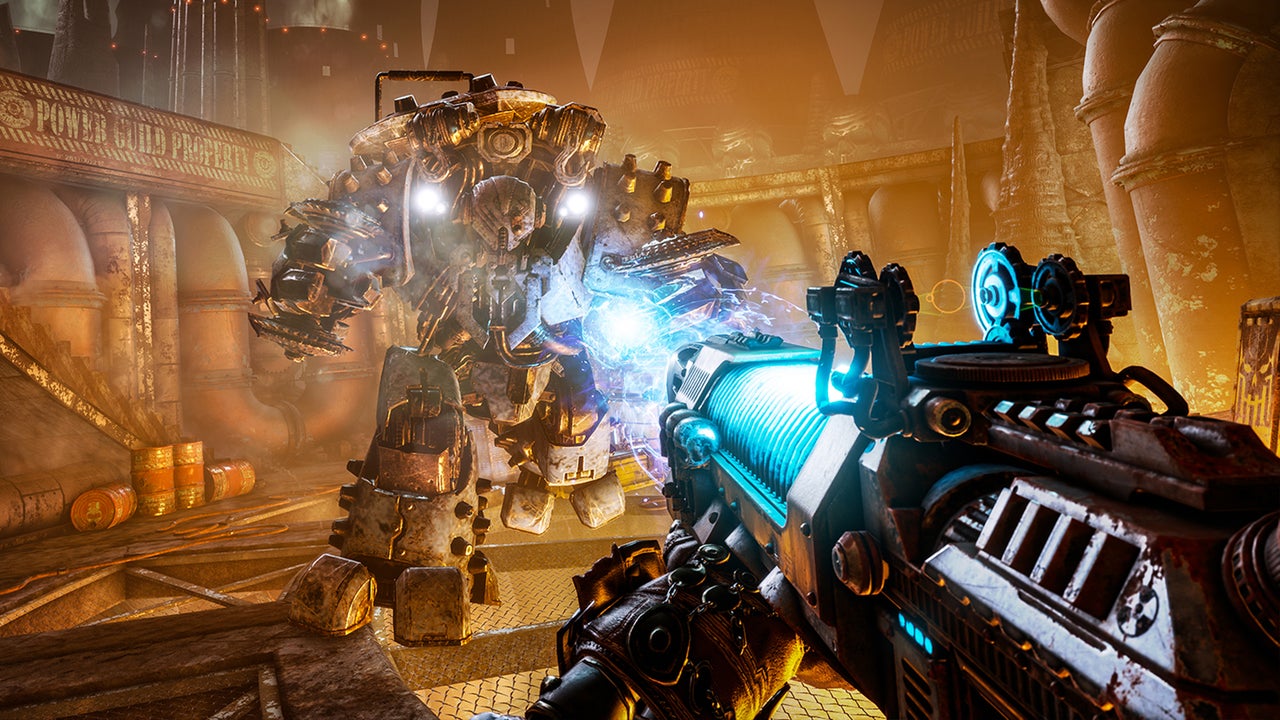 Necromunda is the kind of game that makes me appreciate when developers are given the time they need to really polish a game to a shine, because this is what happens when they aren’t. It’s a fast-paced, gore-filled shooter in the same vein as Doom Eternal with a Warhammer flavor and some RPG elements thrown in, and combat is brutal, violent and often satisfying… but also sloppy and buggy. You’ll see yourself and others phase through the environment, slide around the level during melee animations before popping back into place, and even experience a hard crash or two when your skills are just too much for Necromunda to handle. All of that really sucks the fun out of what should be a great time.

You can see the potential of the gunplay in the moments where things come together – especially when you find a weapon that fits your playstyle well or you use Necromunda’s insane mobility to take out the bad guys in some really awesome way. Between midair dashing, double-jumping, and your grappling hook you can glide across massive areas in seconds and take out enemies with extreme precision. Most of the weapons feel great, from powerful shotguns that turn people into red giblets at close range to heavy weapons that can tear through enemies and scarcely need to be aimed.

As you find or purchase better loot and discover a build that fits your playstyle you can go nuts with some insane builds, like carrying around multiple shotguns and maximizing your mobility so you can zip around the map and blast baddies in the face, or a sniper-focused build where you focus your equipment on improving your odds of getting powerful loot drops.

You also get a dog companion who can be summoned with a squeak toy to attack enemies, which is pretty entertaining. She isn’t the most useful in a fight, since you’ll likely be moving a mile a minute and flying through the air and your dog mostly wanders around, but at least she sometimes succeeds in drawing the enemies’ attention. She can also be upgraded too, which lets her receive and deal more damage, making her marginally more useful, and there are some interesting cosmetic changes as each cybernetic implant gradually transforms your normal household pup into a robotic terror cyber doggo. And yes, you can pet the dog.

All that sounds great, but in practice there are far too many major problems with Necromunda, and the longer I played the more they got in the way of me feeling like a badass. For one, the enemies’ AI is about as sharp as a grape and they’ll mostly just run at you screaming or get caught on something and stand there until you kill them. Or worse, they often hilariously spawn right in front of you for your murdering convenience. Some boss fights just have enemies awkwardly popping into existence without end until the boss is killed.

Bad guys literally form a line in front of you, waiting for their turn to be gruesomely butchered.

And some of Necromunda’s design choices are just puzzling. For example, the lion’s share of enemies can be instantly killed with a melee attack, a la Doom’s glory kills. Doing so locks you into an animation for several seconds, during which time you’re completely invulnerable. Because the AI are a bunch of helpless window lickers, more often than not they’ll run up to you while you’re assassinating one enemy, giving you the perfect opportunity to simply melee kill them with the press of a button as well. Hysterically, this sometimes leads to the bad guys literally forming a line in front of you waiting for their turn to be gruesomely butchered.

It certainly doesn’t help that Necromunda has a hard time keeping up with you when things get intense. Screen tearing and framerate dips are quite common, even on my high end PC (which has a GeForce RTX 2080ti GPU and Ryzen 9 CPU), and it’s at its worst when you’re moving fast or in an area with especially high enemy density. I even experienced a few full-on crashes where I’d find myself staring at my desktop wallpaper and sighing at the progress I’d lost.

There’s no interesting story to carry it through the rough parts, either, as Necromunda’s plot seems doomed almost from the start. The problem is foreshadowed the title itself: “Hired Gun” isn’t a term that lends itself well to a very personal story and Necromunda lives up to that expectation. As a mercenary, your character is as shallow as can be and has almost no personal stake in any of the events throughout the campaign. Most quests start out with someone telling you about someone who needs killing. Your character replies with a short comment that usually amounts to wanting to be rich, then you’re off to commit some war crimes.

Necromunda frankly needed all the help it could get.

NPCs are equally shallow with precisely zero memorable characters or reasons to pay much attention to what’s happening with the story. The plot borders on being actually nonsensical in parts and cutscenes are filled with truly unremarkable dialogue and awkward explanations with little payoff. Most involve characters monologuing at you or having two characters exchange words while you…kinda just watch. Your character matters so little in all that’s happening, in fact, that enemies will shout “kill him” even if you’re playing as a woman.

It’s disappointing because this all takes place in Warhammer’s bonkers sci-fi world where humanity has grown unchecked into something monstrous and unrecognizable. Instead of using the appealing setting to its advantage, Necromunda largely uses it as decoration for mindless action and gore. There’s nothing wrong with turning your brain off for awhile and enjoying some meaningless slaughter (in a video game, anyway), but it certainly feels like wasted potential given all the lore and worldbuilding Warhammer 40K has going for it, and Necromunda frankly needed all the help it could get.

That said, the sights you’ll see along the way are actually quite impressive. Each level is massive and provides plenty of opportunity to wall-run and grapple across rooms as you conduct your orchestra of destruction. You’ll see massive metal trains, creepy, derelict structures, and even an obligatory sewer level, each with plenty of nooks and crannies hiding loot to be claimed and enemies to be slaughtered.

The campaign is short and ends with such little fanfare it actually made me laugh, but there are lots of side quests and repeatable content to keep you looting and shooting for much longer than the six to eight hours the main missions offer. You can replay campaign levels to improve your ranking or grind for loot, or tackle side quests to earn extra money. Side quests reuse areas from the campaign and amount to little more than short bounties to “kill 10 of this enemy type,” but many are at least more challenging than the story missions and offer enough credits to make it worth your while.

The good news is that the RPG mechanics behind the weapons, equipment, and cybernetic upgrades are pretty great for the most part, which makes grinding a worthwhile endeavor. Some cybernetic upgrades offer game-changing abilities, like a shockwave that stuns nearby enemies or the ability to teleport short distances to deliver melee attacks, but most are smaller perks like increased damage resistance or better stability when shooting while wallrunning.

Axiom Verge 2 lands on Earth this summer, coming to PlayStation
Exclusive: Betway and G2 Esports team up in ‘next level’ partnership
First Harley Keener Sets W.E.B. Of Spider-Man On Fire On eBay
Leaked CD Projekt data “may include” employee and contractor details, according to the developer
Helix eSports strikes GUNNAR Optiks partnership