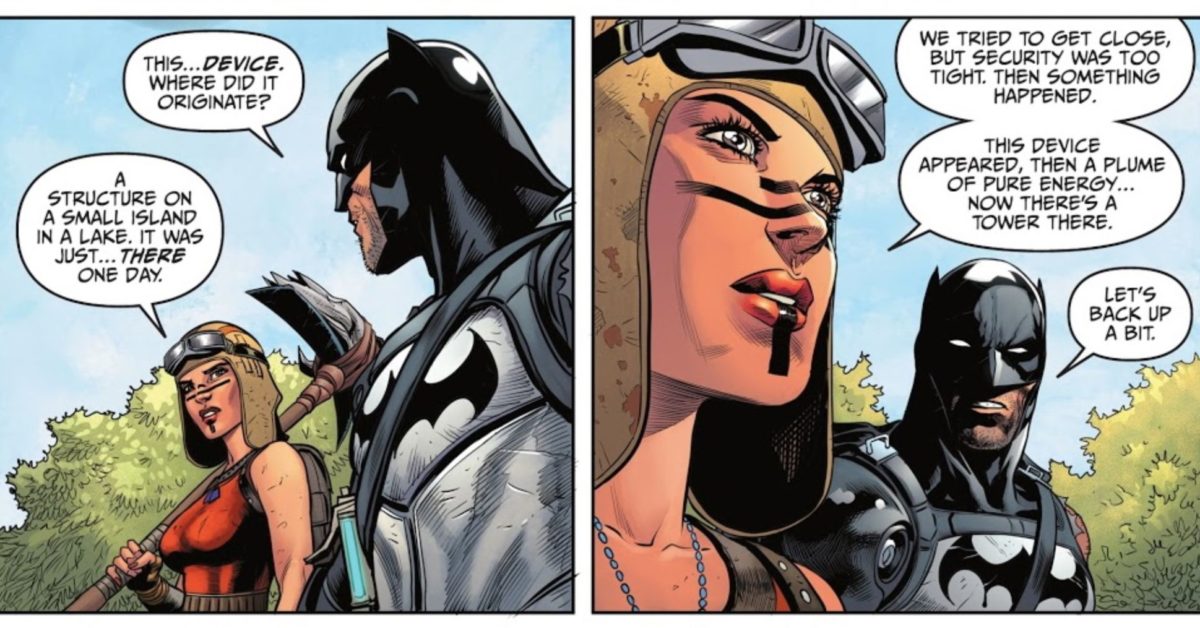 Today sees the release of Batman/Fortnite: Zero Point #4 with all the digital codes you need to get another item for your gameplaying collection. But if you crack the cover, there are also secrets regarding Fortnite lore. And considering that Donald Mustard is credited as a co-writer and variant cover artist, this is about as canon as you can get.

A cast of characters who recoignise they are trapped for eternity in a combat zone of limited size that keeps resetting. These ones have managed to escape the memory wipes, but they are still on Fortnite Island.

With events from the game that have played out on the island, now part of its history, as recognised by these characters.

I just checked into the game and the tower is still there, surrounding the energy portal. Are changes on the way?

As it is established that whatever Fortnite Island is, it has been happening since prehistory. Is such a phrase means anything on an island that keeps resetting itself.

Nothing Batman likjes more than the equivalent of a manhole cover, when he owns the key. Or can find the key. Or can control the key. Which means a look below the surface of Fortnite Island…

Which begs the question – at what point will Fortnite let you go underground again? I took a quick check this morning and there is no update…. yet. When will the game reflect the reality being played out in the comic book? Donald Mustard must, after all, have a plan… but of course, Bleeding Cool told you all about this six weeks ago. Were you paying attention? Batman/Fortnite: Zero Point #4 is published today.

BATMAN FORTNITE ZERO POINT #4 (OF 6) CVR A MIKEL JANÍN
(W) Christos Gage, Donald Mustard (A) Christian Duce (CA) Mikel Janín
Batman has broken free from the Loop and the endless cycle of combat. Now free to explore the island without limitation, the World’s Greatest Detective will discover secrets about the world of Fortnite never before revealed in the game or anywhere else. Just one thing…he’s not alone. Not only is he met by a rogue faction of Fortnite bandits who have ALSO escaped the loop – Eternal Voyager! Bandolette! Magnus! Fishstick! And a few others — there’s someone else trapped, someone who is trying to get free from the world of Fortnite …someone deadly. Will Batman recognize this familiar hunter-for-hire, and even more importantly, will he trust him? Just because Batman’s out of the Loop doesn’t mean the fighting is over… Each print issue of Batman/Fortnite: Zero Point will include a redeemable code for bonus DC-themed Fortnite digital items, inspired by the events in the comic. Fans who redeem all six codes will also unlock a new Armored Batman Zero Outfit for their Fortnite character.
Retail: $4.99 06/01/2021