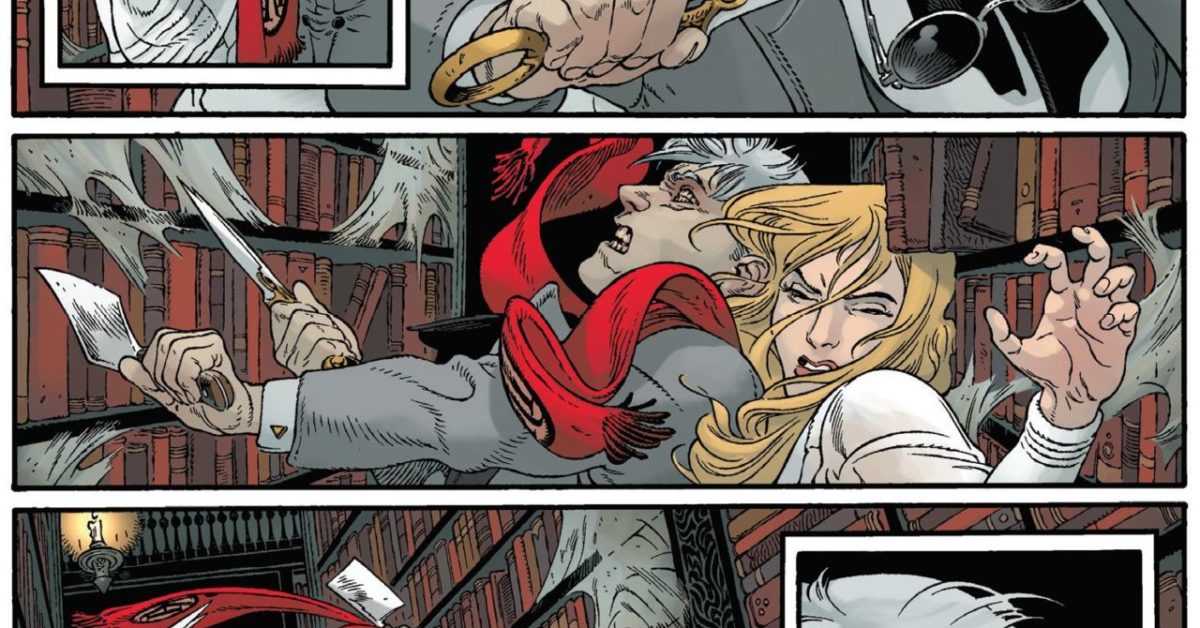 August sees the finale of Sandman/Locke & Key: Hell & Gone with a final #2. Bleeding Cool has had a little look inside those pages. The Corinthian was only seen on the final pages of the previous issue, here is getting a little more involved with Mary Locke…

The  Corinthian first appeared in The Sandman #10 ass a nightmare created by Dream, who destroys him for going rogue and failing to fulfill his original design. Dream later recreates him with “some changes”, though the exact nature of these changes is not explicit. His most notable physical feature is his lack of eyes: in their place, two rows of small, jagged teeth line each eye socket, which he often covers with sunglasses. He can speak, eat, see, and even breath through these mouths. Boyd Holbrook is set to portray the Corinthian in the upcoming television series The Sandman on Netflix.

Locke & Key/Sandman Universe: Hell & Gone #2
story by JOE HILL
art by GABRIEL RODRIGUEZ
cover by GABRIEL RODRIGUEZ
ON SALE 8/31/21 $6.99 US | 48 PAGES | FC | DC BLACK LABEL One-shot 17+
To win back her brother’s soul from Hell, Mary Locke has done the unthinkable: she’s seized control of the imprisoned Dream Lord’s artifacts of power and crossed over into his place of power, the Dreaming! Unfortunately, she’s managed to find herself in the middle of a war for the future of the kingdom, led by none other than the monstrous Corinthian…and even if she can survive that encounter, the road to Hell ends in locked gates guarded by Etrigan the Demon and the all-powerful Lucifer himself! Of course, the Locke family has always had a knack for making keys… The second and final chapter of DC and IDW’s critically acclaimed crossover saga will change the way readers see the worlds of The Sandman and Locke & Key for years to come—for fans of either title, it’s absolutely unmissable!