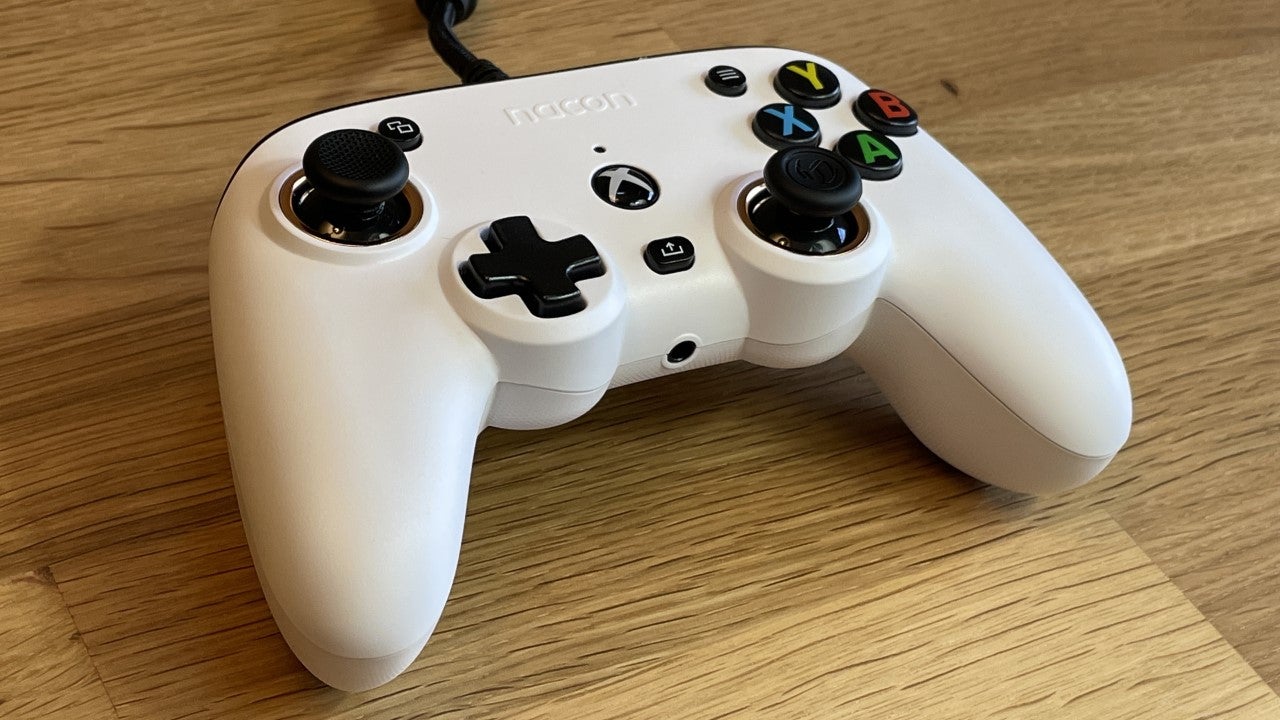 Xbox controller business. The Rig Nacon Pro Compact controller for Xbox, the company’s first for the platform, is a wired alternative for players who want something smaller than what Microsoft has to offer. While the idea is nice in theory, the controller’s redesigned grip feels restrictive and unlikely to fit a wide range of hands. Even with a configuration app and a surprising bonus feature, the Pro Compact has an Achilles Heel weak enough to keep it out of consideration.

The Pro Compact is noticeably slimmer than the standard Xbox gamepad. As the name implies, it has a more compact shape, with shorter handles and a thinner body than the standard Series X/S gamepad. Its grips have deep grooves in the backs of the handles, guiding your middle fingers into a specific grip. According to Nacon, the design is 15 percent smaller than the official Xbox controller. Supposedly, that should lead to less fatigue over time. At 203 grams, versus the 287 grams of the official Xbox controller, it is substantially lighter. That said, I can’t say I find fatigue to be a serious issue with most gamepads, so while the difference is noticeable, its impact is not.Unfortunately, whatever benefits the Pro Compact gets from its reduced size are undone by the controller’s restrictive shape. I don’t have especially large hands, so I found the grip imposed by the handle design to be a bit problematic. By default, the handles don’t fill your hand and the bumpers feel slightly out of reach. I frequently choked up on the controller to what I felt was a more natural resting position, but doing so moved my fingers out of the handles’ grooves. In that position, my middle fingers sat just behind the triggers and my pointer fingers were over extended. When I tried to force myself to keep my hands in place with my middle fingers in the proper place, I still found myself shifting my hands up to hit the bumpers.

The Pro Compact’s button layout is very similar to the standard Xbox configuration. It has all the standard buttons, most of which are in the standard places. It has offset analog sticks, and the cable has the usual breakaway mechanism near the USB connector. There are a few small tweaks, though: You may notice that the menu and view buttons are higher and further apart than usual – they’re closer to the left analog stick and Y than the Xbox button. The Xbox button sits just below the center of the gamepad, and the share button falls just below that, directly between the D-pad and right analog stick. The only major addition or change on the Pro Compact is a small switch on the back of the gamepad, which allows you to toggle custom button mapping off, presumably for tournament play.

D-pad feel, an area in which many players are particularly persnickety, seems fine, though that may not be good enough for everyone. The D-Pad has deep travel, which is good, with very little squish when you hold it. Though it offers very little tactile feedback, the cardinal directions all feel fairly comfortable. It can be hard to feel direction shift under thumb when doing quarter circles and diagonal presses, though.

Surprisingly, one of the best upgrades from the Pro Compact is audio-related. Every Pro Compact comes with a license for Dolby Atmos, the premium virtual surround sound setting. Normally a topic reserved for headset reviews, Atmos is the best of the three virtual surround sound services available on Xbox consoles (One, Series X, and Series S), but it costs a little extra. Plugging in the Pro Compact essentially waives the $15 licensing fee to use it. Your access to Atmos is tied to your console or PC, not the controller, so it isn’t a technical achievement, though. It’s a nice add-on that improves the experience of pairing the controller with a gaming headset via its 3.5mm headphone jack.

Nacon created a one-off configuration app for the Pro Compact, which is available on both console and PC via the Xbox and Windows stores. The Pro Compact app allows you to switch inputs for face buttons, triggers, and d-pad directions, and swap the left and right analog sticks. You cannot remap the system-level buttons, or remap buttons with other functions. While that seems to be the norm for third-party controllers, this limited amount of customization restricts the function’s utility.

The app also features independent response curve customization for both analog sticks and virtual trigger actuation adjustment. Both are well-implemented, and come with clearly defined genre-specific presets. You can only create a single custom profile, but always have the option to toggle back and forth between your custom setting and the controller’s default using the rear switch.

All in all, the Pro Compact app works well, but feels extremely niche because of its limited remapping capabilities. Only the gamepad power user, who wants to meticulously customize trigger and analog stick feel, will really need it.

Though I adjusted over time, the Nacon Pro Compact isn’t as comfortable as other Xbox controllers. Due to the aforementioned issues with the controller’s shape, I found myself frequently shifting my grip as I played a handful of games across Xbox and PC, including Call of Duty: Black Ops Cold War, Dead by Daylight, and Assassin’s Creed: Valhalla. The ways in which my hands shifted varied from game to game. In Call of Duty, where my fingers needed to hang on the triggers, I simply choked up on the controller so I could quickly hit the triggers and bumpers instinctively. In Assassin’s Creed, I kept my left-hand down, but moved my right-hand up to reach the light attack assigned to right bumper. Across most games, though, my fingers often felt cramped as they scrunched into the molded bumps behind the triggers.

It’s worth pointing out that I never experienced any performance-related problems due to the shape of the controller. The face buttons have the same snap as the standard Xbox controller, the triggers have a slight squish, but I only noticed when I was looking for it. I was able to play these games well, even in a competitive multiplayer setting. The controller didn’t “fit” in my hands as well as other gamepads, though. A heavy, but well-balanced controller like the Xbox Elite: Series 2 feels more comfortable over long stretches of time.

The Rig Nacon Pro Compact controller for Xbox is available now for $49.99.

Rune Factory 5 has been delayed to early 2022 here in the west
WWE’s New Day Morphin to Power Rangers Ahead of Boom Comic
BLAST Premier expands Fall Qualifiers to include China and Brazil
PlayStation Podcast Episode 401: Riveting
Hideo Kojima Has Changed How He Thinks and Creates in Light of the Pandemic