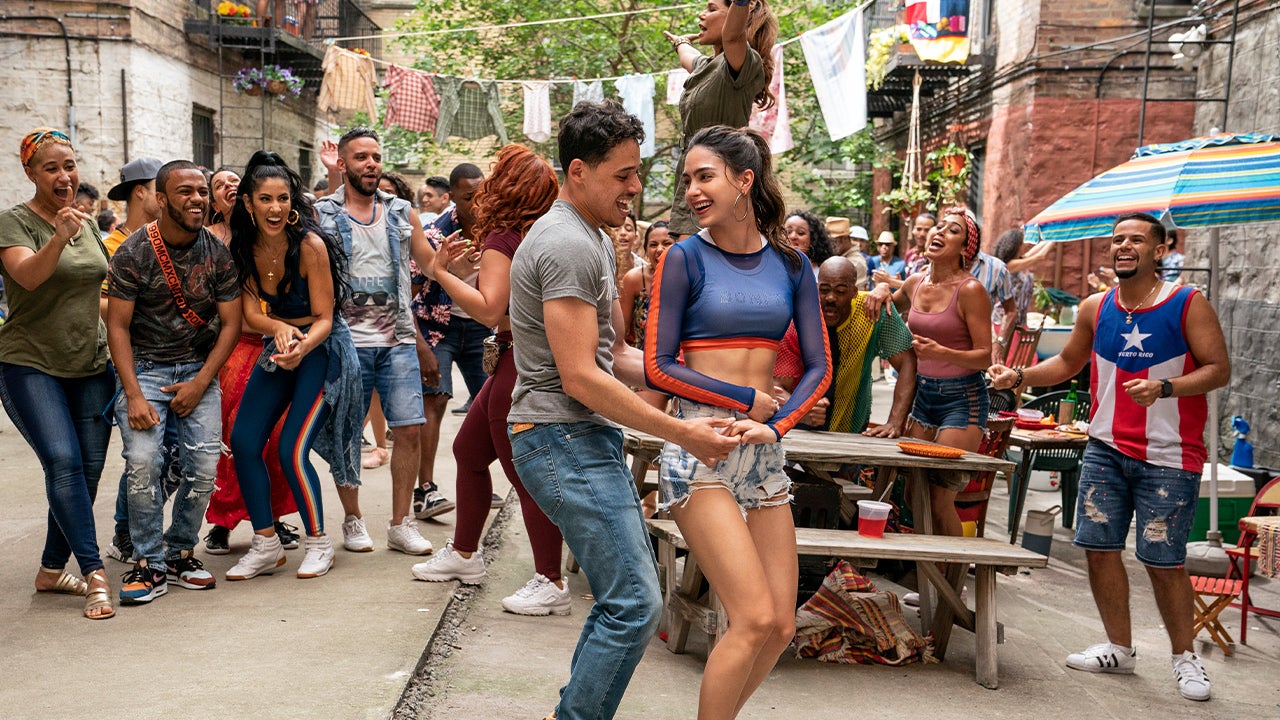 Usnavi runs his corner store with his cousin Sonny (Gregory Diaz IV), a teenage activist, and the rest of the cast is largely introduced as they stop in for a cup of coffee. There’s Usnavi’s friend Benny (Corey Hawkins), an upbeat taxi dispatcher, Benny’s diligent boss Kevin Rosario (Jimmy Smits), and Rosario’s daughter Nina (Leslie Grace), who’s home for the summer after her first year away at Berkeley. Then there’s Usnavi’s crush Vanessa (Melissa Barrera), who’s on the verge of moving downtown to follow her fashion designer dreams, and there are a whole host of neighborhood gossips who work at the local nail salon (Stephanie Beatriz, Dasha Polanco, Daphne Rubin-Vega). There’s also a fun minor role played by Miranda himself, and to bind them all together, there’s the local matriarch Claudia (Olga Merediz), who practically raised the entire neighborhood, and whom they all lovingly call Abuela.

Abuela Claudia, an elderly Cuban immigrant, often speaks of dignity in the face of adversity and the ways people can leave their mark and be remembered. Her words now feel more vital to these characters than ever before. Their neighborhood — made up of Dominican, Cuban, Puerto Rican, and a number of other Latin American cultures — faces the prospect of permanent change, as residents and businesses are being priced out.While the casting has been criticized for colorism — which Miranda and screenwriter Quiara Alegría Hudes have acknowledged — the film attempts to frame its tapestry as multicultural, and its perspective as multigenerational. The characters are all either immigrants, first-generation Americans, or that in-between generation that immigrated when they were young (Usnavi’s family came over from the Dominican Republic when he was eight, while Sonny was still in diapers). Washington Heights is their home, but the film takes aim at the complicated question of what home even means when change is the only constant. Usnavi remains torn between New York and his father’s home in the Dominican Republic, the first home he ever knew. Vanessa wants to move to a new neighborhood where she might be more successful, but her heart belongs to the Heights. Nina has moved even further away, to California, though she might want to drop out and return home despite shouldering the expectations of her community. The film also adds a brand-new element that didn’t exist in the show, a subplot that hits like a freight train, where one of the characters is revealed to be an undocumented immigrant. They may not have the choice of deciding what home they belong to.

These questions of belonging permeate every scene, from the subtle to the operatic, and the film wraps its story in a framing device also invented for the screen. Usnavi, years later and sporting his most Miranda-esque goatee (Miranda played the role on Broadway), narrates the film’s events to a group of children on a tropical beach. It feels like an element influenced by Hamilton, which frames its story of America’s founders as history told (and wrestled with) in the present. Here, it makes the film’s narrative wistful and bittersweet.

Right from its opening Spanglish number — the half-sung, half-rapped title track “In the Heights” — Chu, cinematographer Alice Brooks, and choreographer Christopher Scott make it clear how they plan to tell this story. It starts out restrained, waiting to burst into all-out mayhem as the music builds. The depiction of these characters and the spaces they occupy is distinctly intimate, as the camera peeks at them in the crowded corners of the bodega, often through glass fridge doors or from between messy shelves. It turns the stage’s two-dimensional backdrops into an inviting three-dimensional world, and it establishes the city’s texture before letting its streets be engulfed by dance. The first time a crowd gathers to move in unison, they’re reflected in a window, out of focus and in the distance. At 2 hours and 23 minutes in length, the film doesn’t want to tip its hand too soon. It doesn’t need to. Instead, the opening song introduces the neighborhood in fragments, through an energetic montage of people from all walks of life heading out to start their day. The film even treats the sounds of the city as music, with honking vehicles and the spritzing of sidewalk water hoses layered into the soundtrack.

Chu’s approach is multifaceted. Depending on the scene or song, the film grounds its bombast in naturalism — the actors, though they sing their hearts out, measure their performances for the camera rather than the back row of an auditorium — but as it gets deeper into its runtime, it introduces playful elements of magical realism, of frames seemingly graffitied by hand, and of dreamlike numbers that combine stage lighting with memories of the city’s past. It runs the gamut, but it rarely loses focus of its story and characters.

There is, however, an unfortunate downside to this initial fragmented approach, which seems designed to delay gratification. The first time the film feels big, the way you expect a musical to feel is during “96,000,” in which the neighborhood gathers at a local pool. The song comes to life in a synchronized display in and around the water, but the film hasn’t yet managed to shed its penchant for quick-cuts and zippy movements; the result is haphazard, and it feels less like a story told through dance, and more like the random shot selections of a modern pop music video, where the order doesn’t matter, and the visual language has little to say. This fragmentation continues a little while longer, carrying over to a flirtatious number between Benny and Nina, resulting in a stretch of the film that drags as it approaches the 1-hour mark.

However — and this is a pretty big “however” — this brief dip in visual and narrative energy barely matters moving forward. As the threat of a blackout looms and the characters prepare to confront each other over things left unsaid, the film settles into a rhythm, both in its more intimate moments (often non-musical ones, shared over delectably photographed food) and in its more vibrant, energetic dance scenes, one of which unfolds in a scintillating nightclub.

The film’s biggest aesthetic question is how to frame people. It does this quite deftly throughout when it comes to individuals, whose stories it punctuates through close-ups. This is helped immensely by the fact that ostensible leads Ramos and Barrera are able to balance huge bursts of musical emotion with moments of restraint, culminating in a spellbinding single-take musical sequence between the two of them. The film is a rousing success in this regard, though it’s hardly a surprise; Hollywood, after all, is the realm of the individual, most often telling stories of people who rise above.

However, In the Heights is not an individualistic story. It’s one of found family and community, and one that needs its extras and dancers to feel like more than just a backdrop. The film occasionally falters at this — for instance, a candlelight vigil, which arrives at a key moment and leaves just as quickly, lacks the emotional resonance of the more personal, individual story playing out simultaneously. But the film soon finds itself in this regard, culminating in the show-stopping celebratory number “Carnaval del Barrio,” which goes against most musical instincts and places a large crowd of characters in a cramped setting, allowing their joie de vivre to feel defiant in the face of tragedy. The scene is downright overwhelming.

At its loudest, In the Heights explodes with uncontainable energy. At its quietest, it becomes a reflection on memory, and the connections that make up a culture, a story, and a history; “Little details,” Abuela Claudia says, “that tell the world we are not invisible.” But there are some moments where the film does both these things at once, as it fills the screen with small acts of heroism, and with people dancing and dreaming in darkness. Above all, it does what a great musical should do. It makes you feel alive.

Kevin Feige And Cyclops, The True Story- Daily LITG, 10th June 2021
Mario Golf: Super Rush website now live and you can earn 100 My Nintendo Platinum Points
Looks like Yakuza: Like a Dragon is coming to Xbox Game Pass soon
INTERVIEW: Talking EVERYTHING’S ARCHIE! with Fred Van Lente
Guilty Gear Strive has the most in depth tutorial of any fighting game