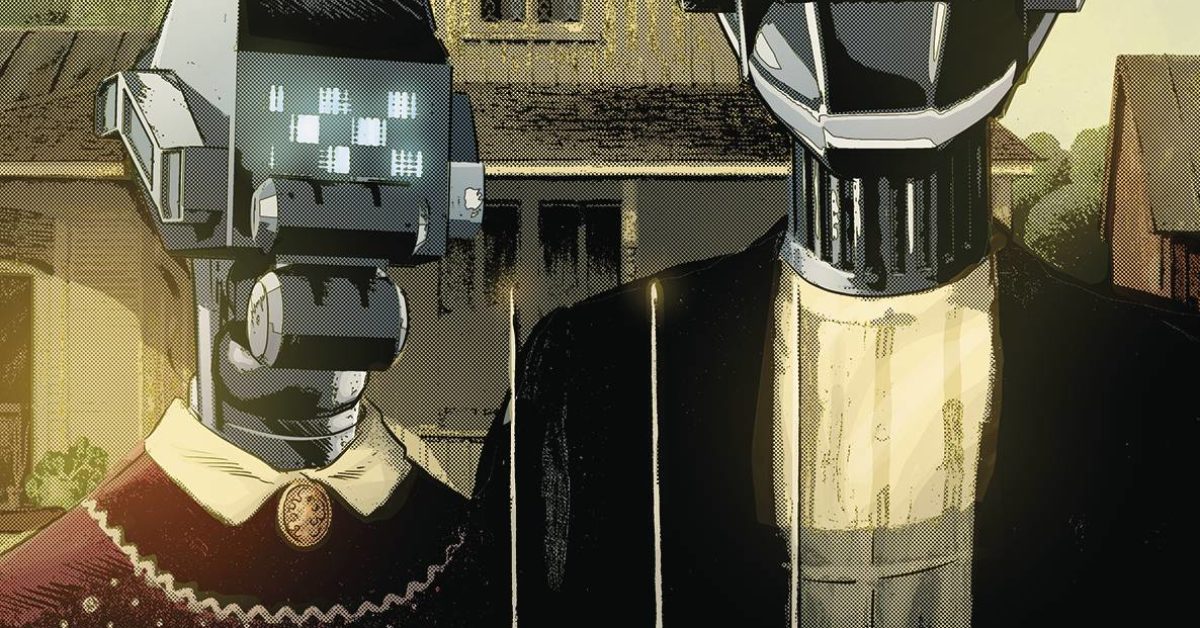 Another launch title from AWA –  Artists, Writers & Artisans, one a month, so that we have Not All Robots by Mark Russell and Mike Deodato, but also have Fight Girls #2, Moths #3, Marjorie Finnegan Temporal Criminal #4, and Resistance: Uprising #5, all in AWA’s August 2021 solicits and solicitations… what will September bring? And will anyone think the #notallrobots hashtag means No Tall Robots?

NOT ALL ROBOTS #1 CVR A RAHZZAH (MR)
ARTISTS WRITERS & ARTISANS INC
JUN211321
JUN211322 – NOT ALL ROBOTS #1 CVR B DEODATA JR (MR) – 3.99
(W) Mark Russell (A) Mike Deodato (CA) Rahzzah
In the year 2056, robots have replaced human beings in the workforce. An uneasy co-existence develops between the newly intelligent robots and the ten billion humans living on Earth. Every human family is assigned a robot upon whom they are completely reliant. What could possibly go wrong? Meet the Walters, a human family whose robot, Razorball, ominously spends his free time in the garage working on machines which they’re pretty sure are designed to kill them in this sci-fi satire from Mark Russell (The Flintstones, Second Coming) and Mike Deodato Jr. (The Amazing Spider-Man,The Resistance).
In Shops: Aug 04, 2021
SRP: 3.99

FIGHT GIRLS #2
ARTISTS WRITERS & ARTISANS INC
JUN211323
(W) Frank Cho (A / CA) Frank Cho
Ten hard-as-nails women face off in an ancient contest of champions where the winner truly takes all: the title of “Queen of the Galaxy.” To win the challenge each contestant must survive the hazards of the planet’s harsh landscape, the ferocious predators on and below its surface, and their fellow contestants. This edition of the contest has a twist: one of the contestants is an infiltrator who has her eye on something bigger than the prize. Who is she and what does she really want?
In Shops: Aug 11, 2021
SRP: 3.99

MOTHS #3
ARTISTS WRITERS & ARTISANS INC
JUN211324
(W) J. Michael Straczynski (A / CA) Mike Choi
The next chapter of the ongoing saga of The Resistance takes an intimate look at a very special species of the superhuman race known as The Reborns. Emily Kai is what is known as a “Moth.” She was granted immense power by the global pandemic known as “The Great Death,” but with a caveat: The moment she taps into the power that resides within her, a clock starts and Emily will have only six months to live. Granted the opportunity to bring immense beauty into the world, but only by paying the ultimate price, Emily embarks on a harrowing journey of self-discovery that will test her to her core and take her to places way beyond her wildest imagination.
In Shops: Aug 18, 2021
SRP: 3.99

MARJORIE FINNEGAN TEMPORAL CRIMINAL #4 (MR)
ARTISTS WRITERS & ARTISANS INC
JUN211325
(W) Garth Ennis (A) Goran Sudzuka (CA) Andy Clarke
She’s Marjorie Finnegan. She’s a temporal criminal. What more do you need to know?
Oh, all right then: all Marj wants to do is race up and down the time-lanes, stealing every shiny-gleamy-pretty-sparkly she can lay her hands on. But her larcenous trail from the Big Bang to the Ninety-fifth Reich has drawn the beady eye of the Temporal PD, whose number one Deputy Marshall is now hard on our heroine’s tail– and taking things extremely personally. Worse still, Marj’s worthless creep of an ex and his even scummier partner have seen an angle of their own in all this, and now intend to use her time-tech to change history for their own benefit. Marj’s only ally? A guy called Tim. And he’s just a head.
I mean come on, what use is just a head…?
In Shops: Aug 18, 2021
SRP: 3.99

RESISTANCE UPRISING #5
ARTISTS WRITERS & ARTISANS INC
JUN211326
(W) J. Michael Straczynski (A) C. P. Smith (CA) Rahzzah
Acclaimed writer J. Michael Straczynski returns to the prescient, ambitious world of The Resistance! In the wake of the assassination of their leader, the Resistance is in disarray, disconnected from each other and hunted by authorities around the world – including an army of “reborns” recruited by the American government. To avert decimation at the hands of a fascistic government crackdown, the Resistance must discover the ace up their sleeve, and then the key to unlocking it.
In Shops: Aug 25, 2021
SRP: 3.99